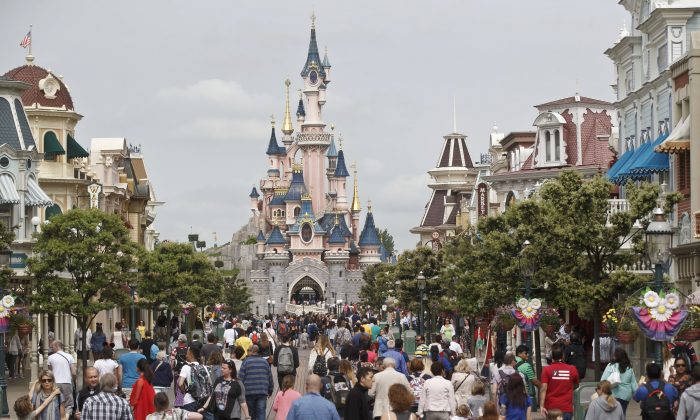 Before a disturbing video of a brawl at Disneyland went viral, the family who was involved told police it never happened.

The Anaheim Police Department said it presented the case to the Orange County prosecutor’s office this week after investigating the fight and video, saying the family hasn’t been cooperative with authorities, Fox News reported.

The video shows a man punching several women after she apparently spat on him during an argument. In the clip, the man is seen attacking several people as children and others watch. Eventually, several bystanders get involved and ultimately subdue the man.

The family initially claimed that nothing happened, said the police department.

“The parties involved all denied anything occurred and we were not there to witness it,” the department said on July 8. “The videos that were not available at the moment [now] make things clear and the case has been presented to prosecutors.”

According to Fox, the department said it was aware of the melee and attempted to initiate an investigation. However, due to the uncooperative nature of the parties involved, they couldn’t do anything.

A Twitter user told the department: “This is a joke. You had many eyewitnesses. Disneyland has cameras.”

Not a joke. There has to be an investigation. The parties involved all denied anything occurred and we were not there to witness it. The videos that were not available at the moment make things clear and the case has been presented to prosecutors

“Not a joke. There has to be an investigation. The parties involved all denied anything occurred and we were not there to witness it. The videos that were not available at the moment make things clear and the case has been presented to prosecutors,” said the department.

The police department said that sometimes fights at the theme park do happen.

“When asked if this is a common occurrence we responded that it does happen when families get together in the heat and get irritated with each other. What happened is unacceptable and we are presenting the case to prosecutors,” it said, Fox reported.

A spokesperson with the Orange County District Attorney’s Office told the Los Angeles Times they are reviewing the incident.

Jason Blair, of Texas, said he got caught up in the viral video captured inside the Southern California park, KFOX reported.

In the video, a black man in a red shirt with long hair is seen repeatedly punching women and others.

Blair said that the attacker got choked out by another parkgoer. He then woke up and wanted to fight again.

“When the man regained consciousness, he kept asking, ‘Who choked me out?’” explained Jason Blair, a high school football coach from El Paso. The man, he said, wanted to fight the person who put him in the hold that made him pass out.

Blair added he was among four people who helped subdue the belligerent man after watching him hit two females.

“I didn’t understand why people were recording and not helping,” the coach said.

“Without a doubt I would do it again,” Blair told KFOX. “When something is not right, you have to jump in.”

In the interview, Blair said the man in red attacked a woman in a wheelchair before assaulting another female. He also was seen in the video fighting a male guest.

In the comments section of the video, uploaded to YouTube (Warning: bad language and graphic violence), people were dismayed that the fight took place in front of children.

Sgt. Daron Wyatt with the Anaheim Police Department told People magazine that authorities responded to the incident after the family was separated and were removed from the theme park, NY Post reported. Wyatt said everyone involved in the fight is related.

The family, he added, is uncooperative and won’t give information about what caused the fight, People reported. No arrests were made, but Wyatt said that “technically everyone can be charged with fighting in public, which is a misdemeanor in California.”

Meanwhile, since children were present, child endangerment charges can be filed.