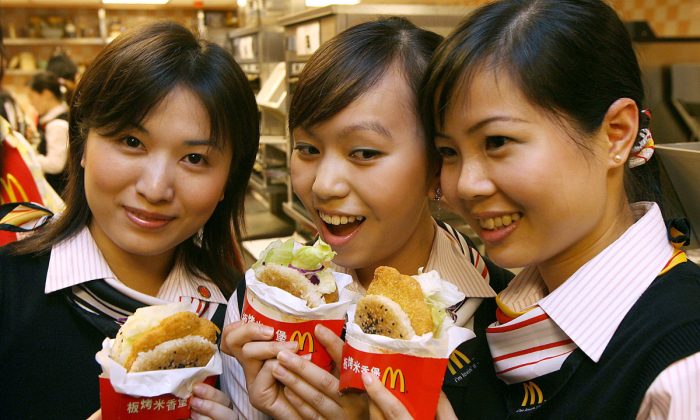 A family found feathers still attached to a fried chicken wing that they purchased from a McDonald’s in Beijing, China on April 21, various Chinese media outlets reported.

The feathery food was revealed on Weibo, China’s version of Twitter. The family members’ names were not given in the reports.

This is the second incident in April of a Chinese McDonald’s serving food not fit for consumption. McDonald’s China has issued an apology.

The family had purchased four chicken wings in total from McDonald’s. They had eaten three of them, and when the child was biting into the last one, they saw the feathers were still on it.

“I saw it when the child was eating it … biting right down onto the feathers,” a woman, likely the mother, said in an interview with Pear Videos, a major Chinese short-video news outlet.

“This is the chicken wing that my precious daughter was eating at McDonald’s,” said the man, likely the father, filming the video. “If your kids are going to have this, or if the adults are going it eat it, what is the wing going to be like?”

The mother said her child was fine, but has suffered psychologically from the incident. She said that she contacted China’s State Food and Drug Administration (SFDA).

McDonald’s posted a response on Weibo: “McDonald’s China has paid great attention to this incident, and [we’ve] opened an investigation.” McDonald’s issued an apology for the inconvenience in the statement.

One of the most popular, though sarcastic, comments on Weibo came from user “Sweet Love” who wrote: “It’s actually chicken.”

A Chinese McDonald’s in southeastern China served a woman a cup of milk tea contaminated with chlorine, according to the South China Morning Post. The woman was hospitalized after swallowing one mouthful.

Milk tea is a popular drink in East Asian countries.

When the husband demanded an explanation from the staff, they simply smelled the cup of tea and threw it away.

McDonald’s China also issued an apology for that incident.