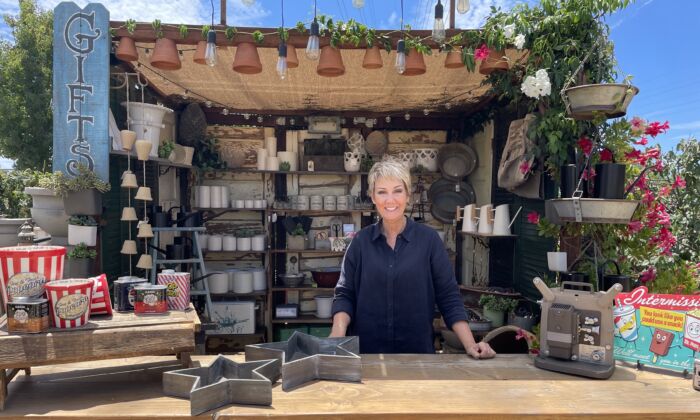 IRVINE, Calif.—Third-generation farmers Dan and Anne Manassero celebrated 100 years of operating as one of the few remaining family-owned farms in Orange County on Aug. 12, showcasing their unique and vibrant interior along with fresh, organically grown produce.

During the day, guests were treated to various tastings of Manassero farmhouse staples, including their flavorful heirloom tomatoes and juicy pink watermelon, followed by a cake cutting while finishing off the evening with vintage-style movie screenings of old-time classics.

The day also served as a reminder of a newer Manassero family tradition of agricultural tourism, something Anne said has helped the farm remain afloat amid stiff competition from growers importing cheaper, “lower quality” crops from South America.

This form of agricultural tourism, she said, includes cooking classes, hosting events, and selling specialty farm goods and souvenirs to offset the cost of government regulations the Manasseros claim make it more costly to operate, such as rules governing salaries and minimum wage, growing and harvesting crops.

“[Government regulations] are the biggest hurdle we face as farmers,” Anne Manassero told The Epoch Times. “Whereas if you look at farms growing in places like Mexico, they don’t face the same strict rules and regulations we have to adhere to here, making their crops much cheaper to produce, and often much less nutritious.”

Walking into the farm, patrons are first greeted with vibrant assortments of delectable freshly baked bread and desserts, in addition to the farm’s signature rainbow spread of organic fruits and vegetables.

Adjacent to the marketplace, guests pass a colorful and decorative part of the farm that is now a popular hub for weddings, bridal showers, and various prominent events.

From the hand-painted barnhouse windows depicting rainbow farm fields illuminated by sunlight streaming through each pane, to vintage European ceiling tile-adorned countertops and hand-painted bathroom sinks, the Manasseros have worked for years to develop a unique and colorful style to the farm that continues to draw in large crowds.

Manassero even customized the children’s play area with her own take on art and culture, infusing the space with customized farm and produce-themed renditions of world-famous paintings, such as Freida Kahlo’s self-portrait and Rene Magritte’s “Son of Man” painting, featuring farm-grown asparagus in place of the painting’s original apple.

Each painting is subtitled with the original artist and painting’s name it was inspired by, having been re-created by local artist Liz Florio.

“I just wanted to create a place for the kids to play but also to learn without realizing that they’re learning,” Manassero said of the play area. “When kids look at these [paintings], they’ll remember and be able to recognize the originals later on.”

Located just off Jeffrey Road between the 405 and 5 freeways, Manassero Farm has also served as a refuge to many in the community during COVID-19 to shop and allow their children to play freely outdoors amid feelings of loneliness and isolation.

“I’m so thankful for your farm,” Irvine resident Jane Bowen told the Manasseros during a tasting. “This place was my sanctuary during COVID-19. I didn’t want to go to the grocery store and bought all my groceries here instead.”

Stopping by the farm sometimes three times per week, Bowen said, has made her feel incredibly “lucky” to live in Irvine.

Manassero said many parents shared similar sentiments to her during the height of COVID-19 lockdowns. She said the farm served as a “safe haven” for parents to bring their children to play outdoors during a time when such activities were restricted.

“I had parents approach me in tears, thanking me for giving their children a place to play during lockdown,” she said.

Even the farm’s restrooms exude Manassero’s artistic creativity and resourcefulness.

Having not been permitted to erect a solid building for restrooms on the land due to the plot’s designation as green space from Southern California Edison, Anne said, she instead designed her own portable bathrooms which now sit on a flatbed trailer. These have the feel of traditional indoor facilities, but with added artistic touches adorned everywhere the customer looks, including inside the stalls themselves.

In addition to customizing and hand-painting the sink vanities, Manassero also added a miniature boutique inside the women’s stall, adorned with a variety of farmhouse gifts available for purchase so that customers “can shop even in the stall,” Manassero said.

“Everything here has a story,” Manassero said, describing her love of incorporating old-fashioned vintage style with modern twists.

With their children choosing to pursue career paths outside of farming, the future of Manassero Farm remains undetermined. According to the Manasseros, they hope to continue operations for “as long as [they] can.”