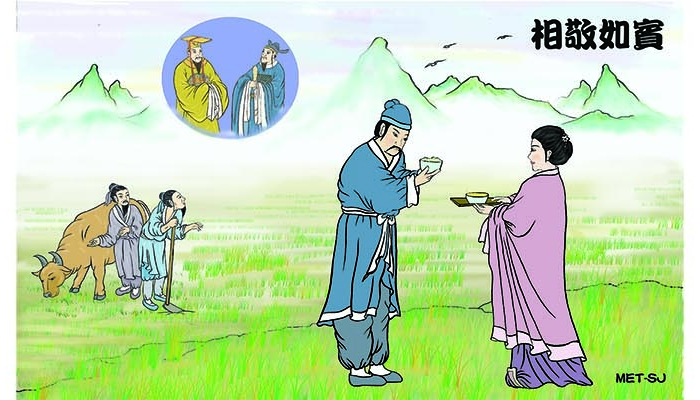 The minister tells the king of Jin about the farmer and his wife, commending them for the great mutual respect and honour with which they treated each other. (Sandy Jean/Epoch Times)
Chinese Culture

Family etiquette from times past
By Cindy Chan
biggersmaller
Print

When seeing ripe fruit falling, remember that it comes from the tree; when having a drink of water, think of the headwaters from which it came, says a Chinese idiom that originated from the Song Dynasty (A.D. 960–1279).

As Canadians in four provinces observe Family Day this month, it is also a chance to celebrate the ancient Chinese tradition that places high value on cherishing one’s origin, nurturing one’s loved ones, and having harmonious relationships within the family.

According to the teachings of Confucius, the importance of family extends to the well-being of the country. In “Zhou Yi,” also known as the “Classic of Changes,” it is said, “[When the] family is stable, the state is stable.” And the “Classic of Rites” states, “Families that are regulated (well-managed and in order) bring about well-governed states.”

Many stories have been passed down through the ages that exemplify the ancient Chinese people’s view of the importance of family and a harmonious family life to people and their communities. Here are just a few.

Treating Each Other With the Same Respect Due a Guest

The first story tells of the great mutual respect and honour with which a man named Xi Que and his wife treated one another.

During the Spring and Autumn Period (770–476 B.C.), the king of the state of Jin sent one of his ministers to visit another state. On his way home, the minister saw a farmer working in a field and a young lady bringing him a meal for lunch.

Although the food was humble, the young woman, who appeared to be the farmer’s wife, offered it to the farmer by holding the tray with two hands in a very respectful manner.

In a similar fashion, the farmer accepted the food with great respect. And while the farmer ate his meal, his wife stood to the side waiting politely.

According to the teachings of Confucius, the importance of family extends to the well-being of the country.

The minister was very touched by what he saw, and he walked up to the couple to talk with them.

The farmer’s name was Xi Que. Upon the minister’s return to Jin, he sought an audience with the king and told him about Xi Que and his wife.

“Your minister observed Xi Que and his wife treating each other with great respect, as if they were each other’s guest,” he said to the king.

“Your Highness, your minister believes that such mutual respect is a key manifestation of virtue, and those who are virtuous are the best candidates for managing the affairs of the country.”

He highly recommended Xi Que to the king, and the king followed his advice and appointed Xi Que to an important position in the state of Jin.

A Daughter-in-law’s Kindness Saves Her Family

The second story occurred during the Qing Dynasty (A.D. 1644–1911) and is about a man named Gu Cheng and his virtuous daughter-in-law.

Gu Cheng had a son who married a young lady surnamed Qian.

Once, when Gu Cheng’s daughter-in-law was away visiting her parents, an acute infectious disease suddenly spread through the town where Gu Cheng lived. The epidemic spread broadly and rapidly, and many people died.

Everyone was frightened, and even close relatives did not dare to visit each other for fear of infection.

When having a drink of water, think of the headwaters from which it came.
— Chinese idiom

Sadly, Gu Cheng and his wife also became infected, followed by all of their six sons and daughters.

When Gu Cheng’s daughter-in-law learned of the news, she immediately made preparations to return to her husband’s home to help take care of his family.

However, her own parents, out of their love for their daughter, urged her not to go. “We are afraid that you will also become infected,” they said.

Their daughter replied: “When I married my husband, it also became my duty to serve and to help my husband’s mother and father and his family. They are now in grave danger from illness. If I do not return to care for them, then is it not heartless and inhuman behaviour?”

Gu Cheng’s daughter-in-law made her best effort to ease her parents’ worry, and then quickly returned to her husband’s hometown.

Soon after her return, miraculously, all eight members of Gu Cheng’s family suddenly recovered from the disease.

The local people believed that the young daughter-in-law’s kindness and filial piety so moved the gods that they bestowed this blessing upon her whole family.

The story of a courteous and respectful little boy named Kong Rong is told in the “Three-Character Classic,” a text composed of a series of simple three-character verses that has been used since the Song Dynasty to teach children about moral principles as well as literature, history, and a broad range of other subjects.

Kong Rong was born near the end of the Eastern Han Dynasty (A.D. 25–220) and was a descendant of Confucius, also known as Kongzi.

When he was only four years old, Kong Rong already embodied the virtue of respecting his elders and giving precedence to them out of proper courtesy and etiquette.

Kong Rong had several older brothers and sisters. One day, his family received a gift of a basket full of delicious pears, and his father kindly asked him to come and be the first to choose a pear from the basket.

His father asked, “My son, why did you pick such a small pear and not a bigger one?”

Due to his kind and honest nature and his respect and consideration of others, Kong Rong’s family regarded him with special fondness and affection.

Another story that tells of great love and devotion between siblings occurred during the Han Dynasty (206 B.C.–A.D. 220).

The story is about a man named Zhao Xiao and his younger brother, Zhao Li, siblings who were very kind and loyal to each other.

One year, a famine befell their hometown and a group of bandits abducted Zhao Li from his house and brought him to their hideout up in the mountains, planning to eat him.

Zhao Xiao pursued the bandits to their hiding place and said to them: “My brother is not in good health, and he is also small and thin. He is not good to eat. I am healthy and stout, and I am willing to be eaten in his place.”

However, Zhao Li did not agree with his brother.

“It was me who was caught by them. It is my destiny. There is no reason for you to take my place, my brother,” Zhao Li said.

Presently, the two brothers hugged each other, both in tears.

Seeing this noble conduct from the two brothers, the robbers were so moved that they released them both.

The emperor later learned about this incident and issued an edict to appoint both Zhao Xiao and Zhao Li to government positions in his court.