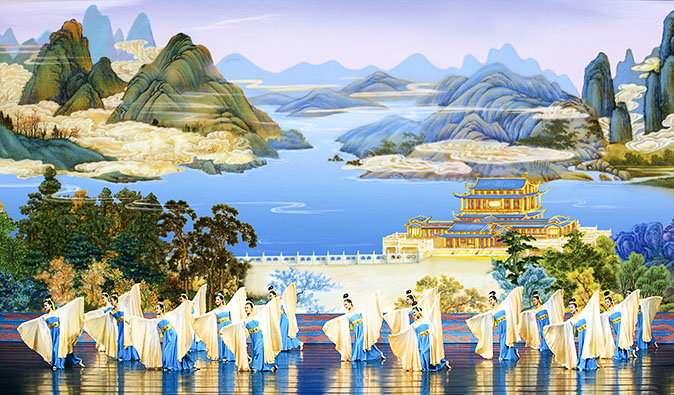 PITTSBURGH—Shen Yun Performing Arts graced the stage at the Benedum Center for the Performing Arts on Saturday evening, pleasing the audience with an artistic revival of traditional Chinese culture.

“The costumes and then just the skill, the agility in everything was just amazing,” said Chryseis Constantine, senior negotiator and U.K. program manager at BNY Mellon. “And the orchestra was beautiful.”

New York-based Shen Yun has a core of classical Chinese dance—an expressive art form that spans back nearly as old as the 5,000 year old Chinese culture—and accentuates the dance with handmade costumes, digital backdrops, and an orchestra that deftly melds East and West.

“Everything was just gorgeous,” said Ms. Constantine, who was accompanied by her parents George and Lenore.

Her mother was enchanted by the dancers.

“They were floating,” she said, adding her appreciation that Shen Yun preserves the ancient traditional culture.

The traditional Chinese culture is rich with virtues such as benevolence, justice, and propriety, as well as respect for the heavens and divine retribution, according to Shen Yun’s website.

“In less than ten minutes each, Shen Yun dances recount ancient myths, bygone heroes, or celestial paradises,” states the company’s website. “Whether set in the past or in contemporary China, every dance embodies traditional Chinese values. Ideals of loyalty, filial piety, and veneration for the divine are cherished and celebrated. Heroes are extolled for their compassion and tolerance as much as their courage or determination when facing adversity.”

The performance pleased the family so much that a new tradition has been made: “We’re going to come back every year,” Ms. Constantine said.