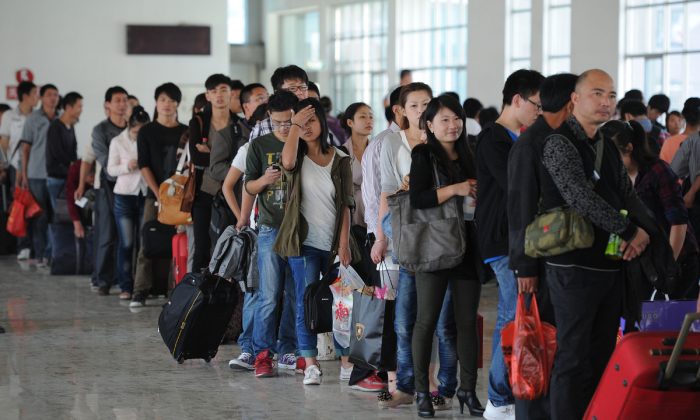 Passengers line up at a train station in China. (AFP/AFP/GettyImages)
Social Issues

A mother of a 3-year-old mentally disabled boy coordinated with her sister to abandon the child in their local train station, according to Chinese online news outlet KNews.

After getting caught, the mother, who was not named, claimed that raising the child was too much of a burden and had two other children to care for, according to the July 25 report from KNews. The boy is afflicted with cerebral palsy.

The boy was found in the Kunming Train Station in Yunnan Province, China on July 18. The boy was returned to the mother, and she was released from custody pending investigation, according to KNews,

Abandoned at the Station

Security camera footage from the train station revealed the mother’s younger sister, who was unnamed in the report, carrying the boy into the train station at about 10:30 a.m. on an unspecified day. She set him down in the ticketing area of the station, and then walked out with her head down.

The boy then wandered about the station on his own for an unreported amount of time. He was brought to a small police security unit inside the station, and was later sent to a local children’s hospital, the report said.

A police officer who spoke to KNews vaguely stated that after contacting employees at the train station, the woman was discovered to be the boy’s aunt. The report did not include if the woman took the train.

The boy’s mother was then taken in by police on an unspecified date, and interrogated about the child. She told them why she abandoned her child, who has cerebral palsy and has difficulty speaking. The mother said the young boy was her third child, and along with his difficulties in communicating, raising him brought too much pressure onto her life, according to KNews.

“I’ve paid for his medical bills for three years,” the mother said in the police interrogation. “I really, really don’t want to give [him] up.”

She expressed that she had no other choice, according to KNews. From this, she planned to abandon him.

The mother and her sister are suspected of abandonment, and are pending investigation.