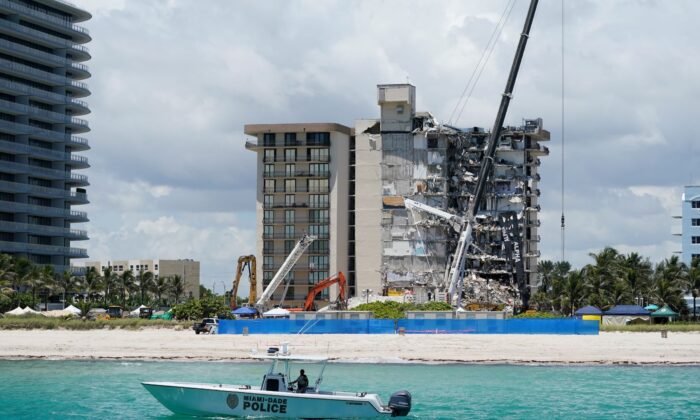 A Miami-Dade County Police boat patrols in front of the Champlain Towers South condo building, where search and rescue efforts continued for more than a week after the building partially collapsed on June 24, 2021, in Surfside, Fla. (Mark Humphrey/AP Photo)
US

A $1 billion settlement has been tentatively reached in the class-action lawsuit brought by victims’ families and survivors of the Surfside Condominium in Florida that collapsed in June 2021.

“I’m shocked by this result—I think it’s fantastic,” attorney for the families and victims Harley Tropin told reporters on May 11. “This is a recovery that is far in excess of what I had anticipated.”

It has not had final approval but Tropin announced the $997 million settlement after a hearing before Miami-Dade Circuit Court Judge Michael Hanzman.

The settlement involved developers of an adjacent building, insurance companies, and “other defendants.”

A massive effort to search for survivors lasted for nine days before the decision was made to bring down the remaining portion of the tower for safety reasons.

In early 2022, the judge approved $83 million to compensate those who suffered economic losses including condominium units and personal property.

The only question that remained was how to allocate money that included proceeds from the property’s sale, insurance proceeds, and damages from lawsuits that included wrongful death cases and property claims, according to court documents.

After the building collapsed, dozens of legal claims were filed against the condo association and other entities.

The main lawsuit argued that work on the adjacent Eighty-Seven Park tower “damaged and destabilized” the Champlain Towers building.

At the time, Champlain Towers was undergoing a 40-year structural review, as engineers had said it was in need of “major structural repairs.”

In 2018, Morabito Consultants was hired to conduct a checkup for the condo’s 40-year safety inspection.

Morabito said in its initial post-collapse statement that the report it submitted detailed “significant cracks and breaks in the concrete, which required repairs to ensure the safety of the residents and the public.”

In 2020, work had not commenced addressing the issues brought forth in 2018 so the condo hired Morabito again to formulate repair plans.

“Morabito Consultants has a well-earned reputation and record for thoroughness and safety,” Morabito said in a written statement.

“The firm performed its work at Champlain Towers South consistent with the highest industry standards and denies that it is, in any way, liable for the collapse or the resulting damages.”

Prior to the tragedy, Miami-Dade and Broward counties were the only two out of Florida’s 67 counties that had condominium recertification programs.

Almost four months after the collapse, a group of engineers and architects advised the state to consider making high-rise buildings near coastal areas undergo safety inspections every 20 years.

In December 2021, a grand jury issued a long list of recommendations aimed at the prevention of another condominium collapse that included more frequent inspections and better waterproofing.

Video was later released by a team of federal investigators that showed evidence of extensive corrosion and overcrowded concrete reinforcement in the building.

In January 2022, seven months after the collapse, temporary structural supports were added in areas of the underground garage of the sister tower, Champlain Towers North, out of “an abundance of caution” by the condo board.

The investigation into the cause of the collapse remains open and active according to court records.