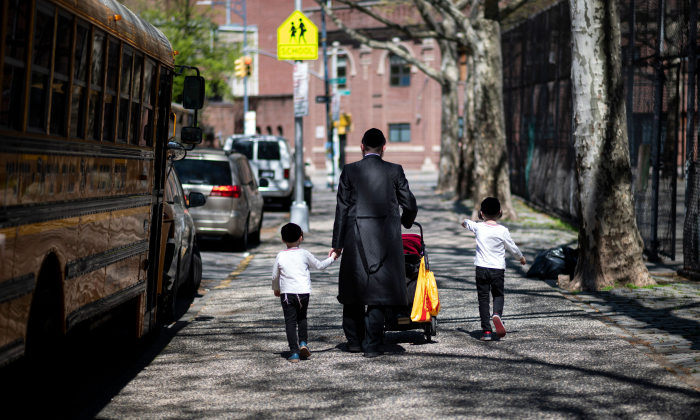 A Jewish man walks with his children down a street in a Jewish quarter in Williamsburg Brooklyn in New York City on April 24, 2019. (Johannes Eisele/AFP/Getty Images)
NY News

NEW YORK—A group of 55 families filed a lawsuit on July 10 asking the New York State Supreme Court to stop the statewide repeal of the religious exemption to vaccines.

Following a measles outbreak in New York, Gov. Andrew Cuomo signed into law a bill on June 13 that repealed the religious exemption to vaccines. The families—including those from the Jewish, Christian, and Muslim faiths—argue that the repeal of the exemption violated their First Amendment rights, exhibited hostility toward religion, and breached protections under the Constitution’s Equal Protection Clause, among other issues.

While the lawsuit names 55 families, the action affects at least 26,000 New York families that obtained a religious exemption to vaccines for their children to attend public and private schools. With the repeal enacted, unvaccinated children can no longer attend public or private schools, forcing parents to decide between violating their religious beliefs and depriving their children of an education.

“Currently, more than 26,000 New York State families are without school for their children,” Michael Sussman, the attorney representing the families, said in a court affirmation (pdf).

“Today, they cannot attend school even though they are healthy and have not been excluded from school because anyone in their school has the measles. These petitioners need immediate relief or their religious exercise will continue to be sacrificed for no compelling reason.”

According to the lawsuit, the repeal has “devastated” the families, leaving those unwilling to violate their beliefs with only the option to homeschool their children, which incurs additional costs and can derail careers.

Homeschooling is heavily regulated in New York state, requiring parents to submit lesson plans and curricula to be approved by the state. Parents who fail to meet the strict guidelines can be punished, including being separated from their children.

The First Amendment prohibits any law that compels Americans to violate their religious beliefs with the exception of cases where a compelling state interest exists. The families argue that the repeal measure failed to demonstrate a compelling state interest. For example, the legislative process for approving the bill did not consider any relevant data, such as statewide vaccination rates, whether any unvaccinated child has transmitted measles, and what risk people who do not vaccinate based on religious beliefs pose to vaccinated people.

The families claim that instead of engaging in objective fact-finding, proponents of the bill in New York’s two legislative chambers engaged in attacks on faith, including members of the legislature calling the religious beliefs of those who oppose vaccination “utter garbage” and “fabricated.” The families say that the disdain for their beliefs—rather than other factors—substantially informed the passage of the repeal. As an example, the lawsuit points out that the two repeal bills languished in the legislature for months, including during the time frame when measles peaked in the state during the first three months of the year.

“Religious rights are fundamental. It is unconstitutional for the state to deprive people of such important rights when religious animus has played a key role,” Robert F. Kennedy Jr., the chief legal counsel for Children’s Health Defense, said in a statement.

“To enact such harsh legislation without any legislative fact-finding, and with the legislators’ open display of prejudice towards religious beliefs different than their own, is simply un-American; it is essential that we fight this.”

The lawsuit also argues that the passage of the repeal violated the New York State constitution by unreasonably interfering with the religious freedom of the plaintiffs. The families say that the state and county health commissioners failed to use the measures already available to them to stem the spread of measles. Notably, no individual infected with measles was quarantined or isolated—as permitted under state law—for roughly eight months from October 2018 to April 2019.

“Rather than employ the methods state law and regulation provided, the state radically interfered with the religious exemption and ultimately eliminated it,” the lawsuit states.

“This represents an unreasonable interference in the religious exercise of plaintiffs because the means and methods provided by state law were never shown to be inadequate or insufficient to deal with the outbreak.”

The only other states with no religious exception for vaccines are California, Mississippi, and West Virginia. Maine is set to begin restricting exemptions in two years.