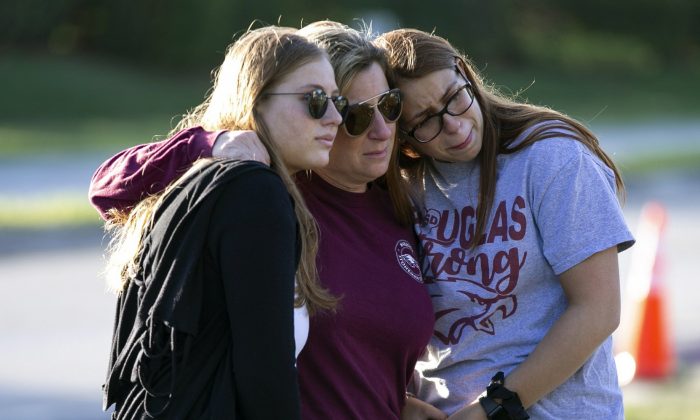 Emma Rothenberg, left to right, with her mother Cheryl Rothenberg and sister, Sophia Rothenberg embrace at a memorial marking the one-year anniversary of a mass shooting at Marjory Stoneman Douglas High School in Parkland, Fla., on Feb. 14, 2019. (Al Diaz/Miami Herald via AP)
Crime and Incidents

Families of nearly all of the victims of the 2018 mass shooting at Marjory Stoneman Douglas High School in Parkland, Florida, have reached a settlement with the U.S. Justice Department over the FBI’s handling of tips involving the gunman.

“The parties hereby advise the Court that they have reached an agreement to settle all of the claims at issue,” a court filing on Monday said. The Justice Department will pay approximately $130 million to 40 survivors and families of victims of the shooting.

The FBI received its first tip about the accused gunman five months before the shooting. A woman later told its tip line that she feared the teenager “was going to slip into a school and start shooting the place up.”

Two days after the shooting, the FBI said it failed to probe the tips it had received in accordance with its protocols.

“It has been an honor to represent the Parkland families who, through their immeasurable grief, have devoted themselves to making the world a safer place,” Kristina Infante of Podhurst Orseck, a lawyer for the plaintiffs, said in a press release. “Although no resolution could ever restore what the Parkland families lost, this settlement marks an important step toward justice.”

The Feb. 14, 2018 school shooting is one of the deadliest in U.S. history. The accused shooter, Nikolas Cruz, returned to his former campus with an AR-15 rifle that ended in the deaths of 17 people before he was apprehended by law enforcement officials.

Cruz was 19 and an expelled student at the time of the shooting.

Reports later revealed Cruz purchased the rifle at the age of 18, then legal under state law. Shortly after the Parkland shooting, then-Florida Gov. Rick Scott, a Republican, signed legislation that raised the minimum age to purchase long guns to 21, along with additional safeguards to help prevent future shootings.

Cruz pleaded guilty last month in a Broward County court to 17 counts of murder and 17 counts of attempted murder.

“I am very sorry for what I did and I have to live with it every day,” Cruz said on Oct. 20, after his pleas were entered. “And that if I were to get a second chance I will do everything in my power to try to help others … I have to live with this every day, and it brings me nightmares that I can’t live with myself sometimes.”

Christopher Burroughs and Reuters contributed to this report.