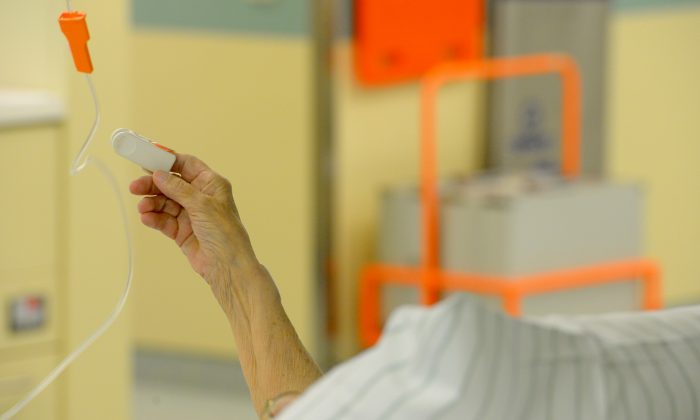 A hospital patient in a file photo. (Theo Heimann/File Photo via Getty Images)
US News

Two families are taking legal action after a case of mistaken identity meant two Chicago sisters signed papers to take a man they thought was their brother off life support.

Chicago and Mercy Hospital is being sued by the two families who are demanding justice after the alleged mix-up.

Authorities told sisters Brenda Bennett-Johnson and Rosie Brooks that the man they were visiting at the hospital’s intensive care unit on May 13 was their brother, Alfonso Bennett, according to WBBN in Chicago.

The families are blaming both the Chicago Police Department and Mercy Hospital for misidentification, which meant that Elisha Brittman passed away without his family’s knowledge, reported ABC30.

Filing a wrongful death lawsuit on July 3, the families are accusing hospital staff and police officers of negligence.

Two families have filed a lawsuit against Chicago police and Mercy Hospital after the wrong man was taken off life support in a case of mistaken identity. https://t.co/LEMk8N0jAZ

Brittman’s uncle, Samuel Trask Jr., told the outlet more must be done to make sure officials carry out their duties properly.

“They need to do a check to make sure these police officers out there are doing their job thoroughly,” he said.

Meanwhile, his niece, Mioshi Brittman said she was left unable to locate her uncle.

“I didn’t just search for him one day. It was every day,” she said.

Brooks said that hospital staff told them the man was badly beaten and that he was found naked without any identification on April 29.

However, they were both unable to identify the man when they arrived at the hospital, where he was listed as a John Doe.

The man was hooked onto a ventilator, and he was going in and out of consciousness. His face had been beaten beyond recognition. He only responded to commands but never opened his eyes, the sisters recalled to WBBM.

As his condition began to deteriorate, the sisters made the difficult decision to sign papers giving permission for him to be taken off the ventilator, and for doctors to perform a tracheotomy. The man soon died.

Both sisters had not been in touch with their brother for years.

To say that we currently have questions is an understatement. We have detectives looking into every aspect of this incident – from the incident response to the circumstances leading to the hospitalization and the notification of family members. Details to follow as we learn more. https://t.co/OUGp0CRPVI

Bennett-Johnson told the news station that a nurse said that the man had been identified via mugshots. Police did not use fingerprints to identify him due to budget cuts, the nurse reportedly told them.

“You don’t identify a person through a mugshot versus fingerprints,” Bennett-Johnson said. “Fingerprints carry everything.”

Chicago police spokesman Anthony Guglielmi told CNN that witnesses informed police the name of the man who had been found beaten up on April 29 was Elijah Bennett.

He was taken to the hospital and put on life support for a week. In that time, no family members sought after him, so the hospital called police for assistance in identifying him, Guglielmi said.

“The name Elijah Bennett showed no match on the database,” Guglielmi explained to CNN. “The other person that comes up is Alfonso Bennett. So the officer gave the picture to the hospital so they could make a positive ID with the family.”

So when the man, mistakenly identified as Alfonso, passed away, the sisters proceeded to make funeral arrangements, even purchasing a casket.

But they stopped planning for their so-called brother’s funeral when one of their other sisters called to tell them that Alfonso had just walked through her front door.

The Brittmans received the devastating news that Elisha had been mistakenly taken off life support, when he was fingerprinted at the morgue.

His nephew, Tracy Brittman said, “It just brought a lot of trauma to the family, the Brittman family, and the Bennett family.”

Cannon Lambert, the defense lawyer for the families, told ABC30, “The bottom line is this mistaken identity situation was something we think could have easily been avoided and should have been avoided.”

According to the publication, the State Senator Patricia Van Pelt may make it required by law to identify an unconscious John or Jane Doe through fingerprinting.