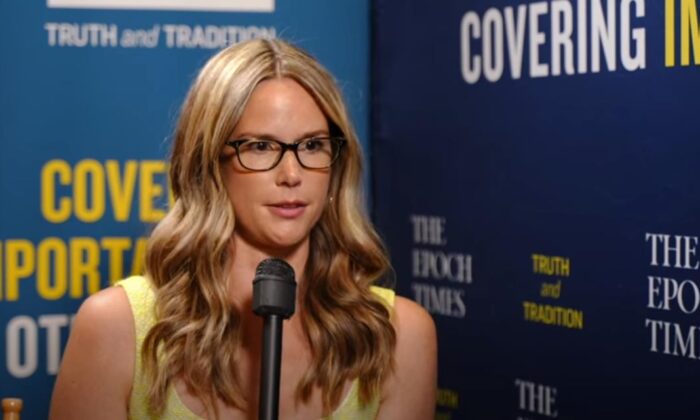 Nathan Worcester
Nathan Worcester is an environmental reporter at The Epoch Times. He can be reached at nathan.worcester@epochtimes.us.
View profile
Follow
and Jan Jekielek

“Families are being devastated by gender ideology,” she told EpochTV’s Jan Jekielek in a Sept. 12 interview at the National Conservatism Conference in greater Miami, Fla.

The Independent Women’s Forum is a conservative women’s group.

Bolar has worked on the Forum’s new “Identity Crisis” video series, which details how the legal weaponization of gender ideology has alienated mothers from daughters.

The first mini-documentary chronicles Jeanette Cooper, a Chicago mother who lost custody of her daughter after the daughter transitioned because she would not refer to the child as a boy.

“In her [Cooper’s] own words, people who are in prison have more communication with their child than I do,” Bolar said.

In other cases, teachers actively transition children behind the backs of their parents.

And the deception doesn’t always end there: “When they communicate with the child’s parents, in some cases, they use the [child’s] real name.”

Transgenderism, Bolar explained, has the hallmarks of a social contagion. That’s not a narrative transgender activists want to entertain.

An episode from the “Identity Crisis” series offers a starkly contradictory example.

“I guess they just think it’s a coincidence that after never showing signs of confusion, a young girl who moves to Alaska, who just happens to live on a block with multiple girls identified as transgender, and then happens to go to school with even more girls identifying transgender decides she too is transgender,” Bolar said.

Two of the Forum’s upcoming videos tell the heartbreaking story of detransitioners—in this series, young women who have taken major steps to alter their bodies, only to regret the decision. One even went as far as to have her breasts surgically removed before having a change of heart.

While one detransitioner in the series was ultimately able to bear a healthy child, Bolar pointed out that the age at which children are taking puberty blockers is being pushed further and further back.

“These young girls are sterilizing themselves. They might not ever be able to carry children, should they change their minds a few years later and decide they want to,” she said.

Bolar noted that detransitioners have faced blacklisting from the media, thanks to pressure from transgender activists.

But their accounts cannot be ignored forever.

“Hearing these stories of detransitioners is an important piece of this conversation.”