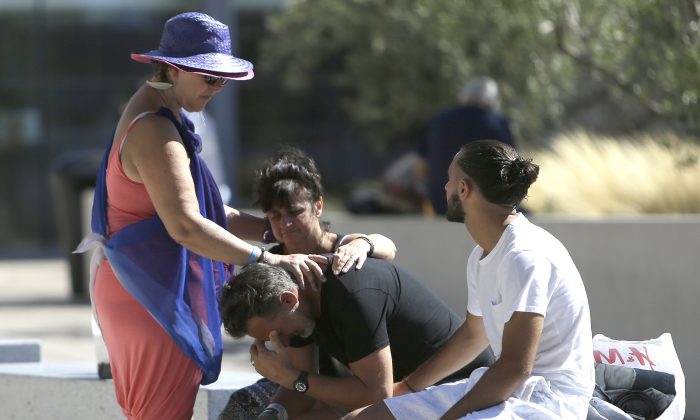 Relative of the victims of the Bastille Day attack confort each other as they gather in front of Pasteur Hospital in Nice, southern France, Friday, July 15, 2016. A large truck mowed through revelers gathered for Bastille Day fireworks in Nice, killing more than 80 people and sending people fleeing into the sea as it bore down for more than a mile along the Riviera city's famed waterfront promenade. (AP Photo/Claude Paris)
International

NICE, France—The painstaking process of identifying the victims of the Bastille Day truck attack in Nice dragged into its third day Sunday, adding to the anguish of family members caught between uncertainty and grief.

Eighty-four people were killed in the Thursday night attack on the Promenades des Anglais, which happened as they were making their way home from a waterfront fireworks display. But just 35 bodies had been identified definitively by Sunday afternoon, according to the Paris prosecutor’s office.

The excruciating delay is adding to the suffering of survivors.

One family spent days canvasing hospitals and office for news of a 4-year-old boy whose mother perished, their frustration boiling over into a confrontation with a regional official. University of California, Berkeley students plastered flyers around the city asking for any information on the whereabouts of three classmates at a technology entrepreneur education program. Several imams stepped into the official breach, posting themselves outside the Pasteur Hospital on Sunday to help family members visiting the injured or looking for confirmation of their worst fears from the hospital morgue.

“It puts them in extreme angst, and extreme tension,” said Brigitte Erbibou, a psychologist who has been counselling family members at center helping victims and family members.

She counselled two children this weekend whose father was killed but whose mother remained missing. “The children were telling me, ‘For Dad we know, but for Mom, it’s unbearable.”

Prosecutors in Paris said the identification was being carried out under an accelerated procedure established after the Paris attacks, using DNA or family medical records. They gave no indication of how long the process would take.

“This process is step by step, so that everything will be guaranteed the moment that the identities will be released,” French health minister Marisol Touraine told reporters during a visit to Nice, where she met families at a hospital and a victims’ center.

Three days after the attack, families of 12 victims were able to see the bodies for the first time. Officials also issued the first death certificates and burial permissions.

Among those summoned was the Sahroui family, who a grief counselor said lost a mother, an 8-year-old boy, a 3-year-old girl and an uncle. In the ethnically mixed Madeleine neighborhood, three women wearing abayas — one of them the two children’s sister—left for the morgue for a final identification.

The Algerian-born father remained inside as friends and neighbors made their way upstairs to pay their respects.

Yasmin Touabia, a volunteer at the victim’s center, counseled them on Saturday. “They were staggered, in a state of shock. The grandmother . kept repeating that her pain was not being able to bury them, that it was the wait. That if they had died at home, they could have been buried right away.”

The official morgue summons, even if just for a few, was a breakthrough of sorts. Authorities on Saturday had gathered grief counsellors at several points in the city as they prepared to issue a list of the dead. But that was called off at the last minute.

Hisham Kahlfallah, whose sister Olfa died and 4-year-old nephew Kylan was listed as missing, was already waiting outside the victims’ center when they said no lists would be issued, his frustration boiling over when the head of the regional council, former Nice Mayor Christian Estrosi, emerged from an official visit.

“Christian, you are not coming our way. Christian come here,” he implored. “We have questions for you, Mr. Estrosi. You called the media and you don’t call the families of the victims.”

Estrosi strode away to answer reporters’ questions, while an aide talked to Kahlfallah, explaining that they had been trying to get the prosecutors’ office to release the list without success.

About the same time across town, the boy’s father gave an excruciating howl of grief outside the Pasteur hospital, crying, “Bye-bye, Kylan.”

Friends contacted by The Associated Press insisted that the death hadn’t yet been officially confirmed, and the Nice Matin newspaper said that a hospital worker had communicated the death with a nod of the head.

Hours later, a Facebook page for victims, “Solidarite Nice” carried photos of the boy leaning against a teddy bear bigger than him. The message: “Rest in peace next to your mother, my little angel. Your sweet smile will always be engraved in my heart.”

UC Berkeley student Abhinav Kukreja was canvassing this weekend outside the Nice police station to find three missing friends studying at the European Innovation Academy in Nice, a program for aspiring tech entrepreneurs.

“The police wasn’t helping us at all. We had multiple calls. So we just decided to bring our flyers,” Kukreja told the AP. The U.S. Embassy gave permission to post the number for tips, he said. “But apparently the police didn’t like that we were putting out flyers.”

Meanwhile, 85 people remained hospitalized. The health minister told reporters that all but one of those hospitalized had been identified by Sunday. One of the last was a 7-year-old boy whose picture had been circulated on social media after no relatives stepped forward immediately after the attack.

The Romanian boy was identified by his grandmother who traveled from Germany on Saturday, said Stephanie Simpson, a spokeswoman at the Lenval pediatric hospital. His father remains missing, but foreign ministry officials in Bucharest confirmed that the mother was hospitalized in serious condition.

Simpson said most of the 30 injured children treated at Lenval will also have to deal with having a family member who was killed or injured.

“This is the really sad part of this tragedy. It really hit deeply the families who were there. What is going to be the most difficult part to handle are the psychological aspects after, because the wounds can be healed and treated very easily. … It is really the psychological issues that are causing the biggest damage.”