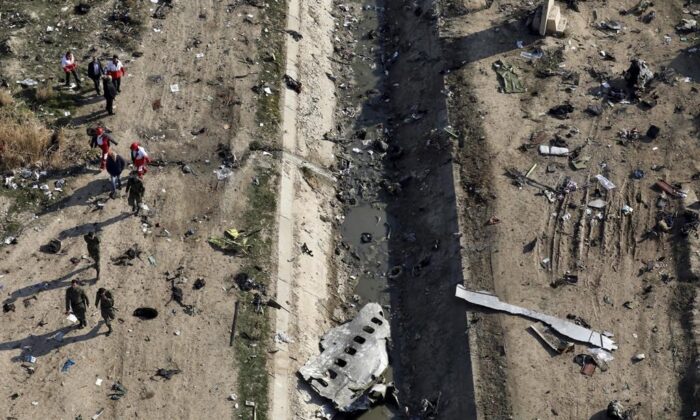 Canada must boost its efforts to hold Iran to account after the regime’s forces shot down a passenger jet two years ago, family members of the victims said Saturday.

At a memorial for those who died on board the Ukrainian International Airlines flight on Jan. 8, 2020, a group representing their loved ones expressed anger and exasperation at Iran’s intransigence and the “glacial” pace of accountability.

“Our patience is exhausted. Today is the day when diplomacy ends and justice begins,” said Hamed Esmaeilion, who heads the Association of Families of Flight PS752 Victims.

The group is demanding that the case go before the International Civil Aviation Organization (ICAO)—a United Nations agency based in Montreal—and that the RCMP launch a criminal investigation.

It is also calling for arrest warrants and government sanctions against senior Iranian political and military leaders, and for the designation of Iran’s paramilitary Revolutionary Guard as a terrorist organization.

The regime snubbed another deadline earlier this week set by Canada and its allies to negotiate a settlement for the families.

Nearly 140 of the 176 people killed in the plane crash had ties to Canada, including 55 Canadian citizens and 30 permanent residents.

“We keep writing polite letters, one after another,” Esmaeilion said of the federal government.

“We will not relent with an empty, shallow apology and political gamesmanship … We shall never forget, nor shall we ever forgive.”

At the partly virtual commemoration in Toronto’s north end, Prime Minister Justin Trudeau said Canada “will not rest” until Iran is held accountable.

“I promise you we will always continue fighting for the accountability, transparency and justice you deserve,” he said.

Speaking by video, Trudeau attributed the disaster to “recklessness and complete disregard for human life of Iranian officials—we cannot allow that to stand.”

The words came as cold comfort to some.

Kourosh Doustshenas, whose 39-year-old fiancee Forough Khadem was among the victims, said the ongoing battle to hold Iran responsible “leaves no time to heal.”

“Every morning I wake up and the last thing I think of is Forough, in my mind, in front of my eyes,” he said in a phone interview from his home in Winnipeg.

“Two years on, the pain is fresh, the wound is open in my life and in many others who’ve lost their loved ones like me.”

Titled “the open wound in the sky,” the Saturday ceremony included speeches by three federal cabinet ministers as well as Ontario Premier Doug Ford and Toronto Mayor John Tory. The two leaders called the downing a “most heinous act” and “deliberate act of terrorism,” respectively.

Mothers recited victims’ names, at times tearfully, between video montages that featured loved ones, children among them, directly addressing the deceased.

Opening with lines from Iranian poet Ahmad Shamlou, the two-and-a-half-hour event was followed by an outdoor vigil in North York’s Mel Lastman Square.

The Conservatives called on the Liberal government to impose sanctions on Iranian officials following a lack of co-operation from the regime.

“Iran’s refusal to negotiate compensation for the victims makes it clear the Liberal government must use every tool available domestically and internationally,” MPs Michael Chong, James Bezan and Melissa Lantsman said in a statement.

The Tories are also demanding the government launch discussions with the ICAO “to limit Iran’s ability to operate commercial aircraft in international airspace until they agree to abide by international norms in the investigation.”

On Monday an Ontario court awarded more than $107 million to families of six of the victims, though it remains unclear how the money might be collected from Iran.

The decision followed a May ruling that the missile attack amounted to an intentional act of terrorism, paving the way for relatives of those killed to seek compensation from the regime.

The Jan. 8, 2020, tragedy unfolded against a backdrop of escalating violence in the region. Days earlier, a U.S. drone strike killed Iran’s top military commander in Iraq.

Iran then retaliated by launching missile attacks on bases in Iraq where American troops were stationed. Canadian troops were also stationed on the bases as part of an international mission. No military personnel were harmed.

Iran has blamed human error, but Canada and its allies have dismissed the explanation and demanded a full accounting from the country—demands that have been ignored in Tehran.

In November, the victims’ association published a report that accused Iranian authorities of tampering with the electronic devices and misidentifying the remains of some of the passengers.

The actions made up part of what the group dubbed Saturday a “machinery of deceit” by Iran that saw it bulldoze the crash site within hours and hold the cockpit’s black boxes “hostage” for seven months.