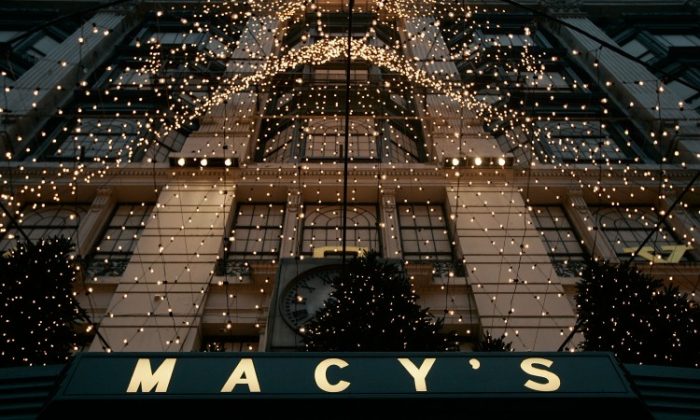 The Midtown Manhattan's Macy's department store with holiday decorations in this file photo from 2009. (Chris Hondros/Getty Images)
US News

Macy’s to Close 28 Stores Across US Despite Improved Sales

Macy’s is closing more than two dozen stores as troubles mount for the legendary retailer, according to reports on Wednesday. The chain is also planning to shutter a call center, affecting around 800 jobs alone.

In all, the company will shutter 28 Macy’s stores and one Bloomingdale’s location across the United States, reported Fox News and CNBC. Macy’s operates around 860 stores across the country.

A spokesperson told Fox that the closures are part of a routine review of Macy’s portfolio.

“We will provide an update on our growth strategy and three-year plan, including details on our stores segmentation strategy, at Investor Day on Feb. 5,” a Macy’s spokesperson told the “Today” show.

Macy’s on Wednesday reported that its sales at stores opened at least a year fell 0.6 percent during the November and December period, which was not as bad as most industry analysts had anticipated. The company’s stock rose more than 2 percent in afternoon trading Wednesday.

In November, Macy’s cut its annual profit and sales expectations after posting a steeper-than-expected 3.5 percent drop in same-store sales for the third quarter.

“Macy’s, Inc.’s performance during the holiday season reflected a strong trend improvement from the third quarter. Our digital business and Growth150 stores performed well. Additionally, customers responded to our gifting assortment and marketing strategy, particularly in the 10 days before Christmas,” said Jeff Gennette, chairman and chief executive officer of Macy’s, said in a news release. “The entire organization committed to delivering Holiday 2019, and it showed up in our execution. I want to thank all of our colleagues–full-time, part-time, and seasonal–for their hard work and dedication to serving our customers.”

A spokesperson also told Business Insider that one of its call centers in Tempe, Arizona will be closing next month. The operations would be moved to other locations in Clearwater, Florida, and  Mason, Ohio.

In the past several years, Macy’s and other department stores have been hit hard as consumers switch to buying their products online.

“Macy’s failure on the sales line comes back to one central problem: the products it sells and the environments in which it sells them are not aligned with what consumers want,” Neil Saunders, the head of GloablData Retail, wrote in a note to clients, reported Business Insider.

He added: “Admittedly, some steps have been taken to remedy this–such as the refurbishment of the menswear department at its New York flagship, the addition of concepts like Story to a handful of stores, and the focus on Growth 150 shops—but these things are drops in the ocean when set against the entirety of Macy’s business. They are not going to quickly move the needle in any meaningful way.”