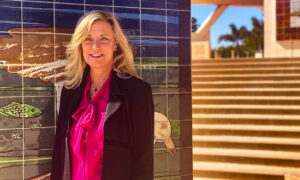 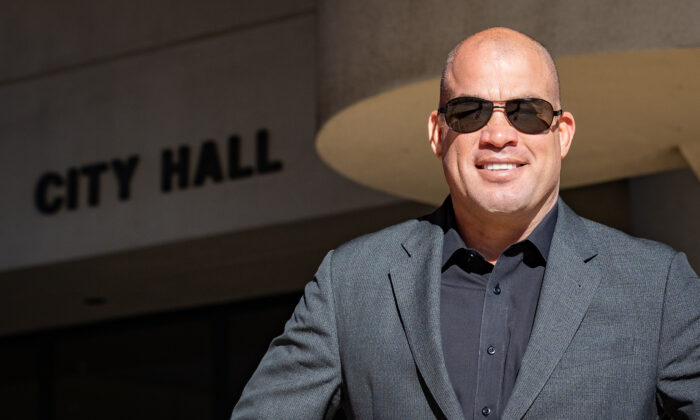 HUNTINGTON BEACH, Calif.—When former Ultimate Fighting Championship (UFC) fighter Jacob “Tito” Ortiz decided to run for Huntington Beach City Council, he had two goals in mind: one, to fight for the city he was born in; and two, to win.

He got more votes on Nov. 3 than any other candidate in the city. Not only did he win one of the three open council seats, but he did it by a margin that significantly surpasses any of the other 14 candidates.

The main issue that pushed the light-heavyweight champion to run for office was the rise in homelessness and crime in the city.

“I think what really sparked it was watching the deterioration of the city, how much it’s gone down over the last 10 years,” said Ortiz, who ran on a conservative platform. The city has a strong Republican voter-base, unlike much of the blue state.

He noted that in the early ’90s, Huntington Beach was ranked one of the safest cities in America. “I see downtown Huntington, and the homeless situation has grown rapidly,” Ortiz said.

He said the newly opened Huntington Beach navigation center will help, but more needs to be done. Ortiz wants to see more psychological evaluations for the homeless, to help them with the major root problems that land them on the street.

“And I got to make sure we stand bold protecting our citizens of Huntington Beach that pay the rent, that pay the mortgages,” he said. “Safety is very important.”

There should be a zero-tolerance policy in Huntington Beach for homelessness, he said, so there need to be policies in place to rehabilitate these people.

The Hall of Famer said he took it “very personally” in June, during the nationwide protests following the death of George Floyd, when Antifa and Black Lives Matter protesters threatened to “burn the city down.”

“I am not an aggressive person. I’m not a person who loves to fight. I do it because it was my job title. This is totally different,” Ortiz said. Now it’s about fighting for his community, about doing the right thing, he said.

During the unrest this summer, Ortiz volunteered with other residents for 10-hour shifts to protect local businesses. He wanted to send a message, and he believes he did help do that, since no businesses in the area were vandalized.

He’s also the father of three boys. His eldest, Jacob, is from his first marriage, which ended after six years. His twin boys, Jesse and Journey, were born in 2008 to his ex-girlfriend Jenna Jameson.

Ortiz thought about becoming a police officer when he saw civil unrest permeate pockets of Huntington Beach, but felt he’d have his hands tied as an officer, and that he could have a broader impact as an elected official.

Initially, he wanted to jump right into the mayoral position. But, after doing some research, he learned he would have to start at the city council level first—mayors are not elected in the city, but rather selected by city council from within city council.

Mayor Ortiz “has a nice ring to it,” he said. That’s what his sight is set on next.

But for now, he’ll practice using skills he learned in UFC in his new city council seat. He said politics and fighting are basically the same thing, “because you get pulled by different directions from different people.”

Huntington Beach was thrown into the media spotlight over the summer not only for the “Reopen California” protests, but also for its defiance of mask mandates.

Ortiz wants to encourage a healthy lifestyle as a precautionary measure to combat COVID-19. He doesn’t believe in mandating masks.

“They want to do a massive [mask] mandate—how come they don’t do a health mandate, where people got to go to the gym, people got to eat healthy? That should be mandated. People that are getting sick have preexisting conditions,” Ortiz said.

“I feel really bad for the families that have lost family members from COVID. But we need to make sure that you’re doing the right things as far as vitamins and being healthy and being out in the sunlight,” he said.

‘I Refuse to Be a Victim’

Ortiz held the UFC Light Heavyweight Champion title from 2000 to 2003 and inserted himself into the early UFC scene. Later, he entered the Hollywood world, with Trump as his boss on “The Celebrity Apprentice.”

But it wasn’t an easy road to achieve the accolades. His childhood home from 7 to 13 years of age was a combination of six motels on Harbor Boulevard in Santa Ana.

His friends didn’t know he was homeless. If they asked to come over, he would make something up, maybe say his parents were out of town. He often didn’t know where his next meal would come from.

“It was a lot of TV dinners, government cheese, a lot of powdered milk, food stamps,” he said. He was embarrassed using food stamps at the stores, and wearing clothes he had already grown out of.

His entrepreneurial spirit was cultivated at the age of 7. He would go down to Newport Beach pier and fish, then sell what he caught to locals.

“I’d get people’s phone numbers, and when the fish would be running, I’d call them and they’d come down. They’d buy fish from me for two bucks a piece and I would make money by doing that, and it was just a hustle,” he said. “I didn’t ask for anybody to give me anything. I wanted to work for it.”

He felt the need to work at such a young age because he “really didn’t have a choice. This is pretty much a fly or die kind of attitude, and I was gonna fly,” he said.

His father was a heroin addict who blew the family’s money chasing his next high.

Ortiz joined F Troop—a gang in Santa Ana—as a teen. But when his best friend in the gang was shot and killed, that was the turning point. His mother decided to move herself and Ortiz to Huntington Beach. They left Ortiz’s father behind.

“I got a second chance of life. My mother made a big sacrifice, from my mom being with my father for over 16 years and to get up and just leave. But she knew that I was the next one to be dead or in jail, and she wanted to take care of me. I’m very thankful for that,” Ortiz said.

During his freshman year at Huntington Beach High School, Ortiz joined the wrestling team; he wrestled all four years. His wrestling coach, Paul Herrera, pushed him a lot. He spent time on extra workouts, getting in more reps.

Ortiz loved the individuality of wrestling compared to team sports. The pressure was all on him, and it was fun.

“Wrestling pretty much saved my life, you know,” Ortiz said. “I think God did it to help me save my life, to get me focused … with hard work, dedication, sacrifices.”

“My true name is Jacob,” he said. He recalled how the Biblical Jacob wrestled with a “man” commonly interpreted to be an angel or God. Jacob emerged victorious at sunrise with a new name, Israel.

Ortiz didn’t have much of a childhood, and that’s probably why he still feels like a youngster at the age of 45, he said.

“Once I was able to make really good money, I was able to experience a childhood that I wanted—from traveling, buying things that I want. And people say, ‘Yeah, that’s just materialistic things.’ But those are goals in my life that I wanted to achieve,” he said.

“From a kid being 7, 8 years old selling fish to eat, and to get into wrestling, … to get into fighting, to be able to buy my house on the water, to buy my Rolls-Royce Phantom, to buy my Porsche, to give my children everything I ever wanted as as a child—the happy family I have, I’m very fortunate,” Ortiz said.

He’s been with his girlfriend, Amber Nichole Miller, since the fall of 2013. They live together in Ortiz’s Huntington Beach home with Jesse and Journey.

During his successful rise in UFC, Ortiz was searching for a father figure, and found it in role models like Hulk Hogan, Mohammed Ali, and Trump.

“As a kid growing up, I watched professional wrestling. … Hulk Hogan was a guy who I looked up to, and that’s like the American Dream guy coming out with American flag,” Ortiz said.

He had the opportunity to meet Mohammad Ali, too, who inspired him to stand up for his values. He said Ali was a great figure “fighting for the African American people.” He admired that Ali was able to step up and speak “and people listened to him.”

“We have so much similarities in life, when I had conversations with him. It just seemed like it was meant for us to talk with each other. And at the end of the day, he just said, ‘Don’t forget where you come from.’”

While working for Trump on “The Celebrity Apprentice” in 2008, Ortiz picked up some useful advice from him, too.

“He said to me, ‘Tito, all this business stuff, it really doesn’t matter. What really matters is two things: your word, and your name. Don’t tarnish your name for anything, and always keep your word.’

“I teach my children those things,” Ortiz said.

Trump attended a few of Ortiz’s fights in the early 2000s and asked for autographs for his children.

Ortiz always remembered Trump’s support for him, and it prompted him to support Trump in 2016. “He was the first president I ever voted for. I never voted ever before him,” he said.

‘I Tried to Save Her’

“I tried to save her. I tried to make a difference in her life. I tried to have that happy family with a white picket fence, and I couldn’t make that happen. My whole life, I’ve always been able to prove people wrong,” he said. “With that relationship, I couldn’t succeed, because drugs are more powerful than family to her.”

The relationship was filled with booze, weed, and dysfunction—everything Ortiz fought so hard to get away from in his childhood. Since then, Jameson has focused on getting healthy, and she has given birth to another child with her husband, Lior Bitton.

“It’s a homey, comfortable home. It’s nice,” he said. “My kids are happy when I come back from training or work or any of my business stuff. I come home for dinner and dinner is cooked. We don’t have nannies; she takes care of the house, I pay the bills. We have a happy family and we conversate with each other. We try to show our children what a true life, a true family should be about.”