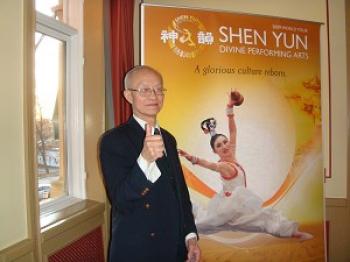 Tang Hao
View profile
Follow
biggersmaller
Print
TAICHUNG, Taiwan–During the fourth round of cross-strait free-trade talks, thousands of Falun Gong practitioners protested peacefully around the clock outside the meeting hall in Taiwan. In a calm and rational manner, they declared their message: “Stop the persecution of Falun Gong” to visiting Chinese official, Chen Yunlin.

The strength these practitioners demonstrated deeply touched the hearts of the public. Amidst the bitter cold, many heart-warming stories emerged.

“Go, Falun Gong,” “Falun Gong, you are truly amazing!” and many similar words were heard. They were spoken by people who were there to protest on behalf of various political groups as well as by pedestrians, car drivers, and motorcyclists who passed by. Again and again, the activities of the practitioners were recognized with admiration.

The car of a political protest group circled the meeting hall continuously—the leader speaking in angry tones about the group’s opposition to the cross-strait free-trade agreement. Whenever the vehicle passed by the Falun Gong site, this speaker would suddenly change his demeanor, gently reminding the driver to turn down the volume of their loudspeaker. “Don’t disturb Falun Gong’s peaceful protest,” he would say.

Gestures of Support and Respect

It was past 10 p.m, and the temperature was dropping. Many other protesters hurried home with their hands tucked in their pockets to shield them from strong and bitter winds. “Rumble, rumble!” A motorcyclist suddenly stopped beside the Falun Gong practitioners who continued holding their banners high.

The driver took off his helmet and approached the practitioners with a large thermos bottle and a stack of paper cups. “Hello! I live in the neighborhood. It’s very cold, and I brought some hot water to warm you.” Person by person, he offered the warm water to them in a gesture of support and respect for those who practice “Truthfulness, Compassion, and Tolerance.”

“You must be hungry—you have been standing here for so long,” said another gentleman speaking in a typical Taiwanese Mandarin dialect as he offered them a bag of bread.

While many Falun Gong practitioners turned down the generosity, they expressed their gratitude for the compassion, caring, and support for justice which were shown.

“We have all come here voluntarily and spontaneously,” explained a female practitioner to an elderly person who questioned why thousands of people were sitting in protest.

‘I really don’t understand why the CCP suppresses them’

Many who saw the group exercises and the performance of the celestial marching band began to search for information about the persecution of Falun Gong in China, and many volunteered their opinions.

“Falun Gong is so calm and peaceful. I really don’t understand why the CCP suppresses them. They are just a group of cultivators!” one was heard saying.

A taxi driver, choked with emotion, said he had witnessed numerous protests and rallies, large and small, but had never seen a group as peaceful and rational as the Falun Gong.

“I drove some customers to Ching-Chuang-Kang [the day that Chen Yunlin’s flight arrived]. I saw Falun Gong practitioners all along the roads. You are truly marvelous!”

Another taxi driver was happy to receive leaflets about Falun Gong. He asked, “Does this tell me how to learn Falun Gong?”

The CCP’s persecution of Falun Gong has not ended, and the bitter wind is still blowing, but the understanding and support shown by the people of Taiwan once again tells us that fairness and justice still live in peoples’ hearts.