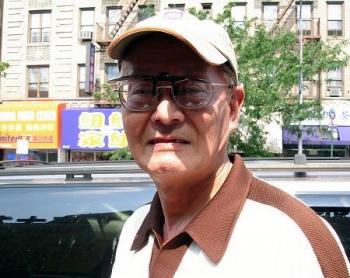 Mr. Hu Ping, a Flushing, New York based businessman who is also a Christian, publicly accepted an interview from The Epoch Times. (The Epoch Times)
Opinion

Flushing Businessman: Falun Gong is the True Character of China

FLUSHING, New York City—On July 20, from approximately 12:00 p.m. to 5:00 p.m., in an effort to expose the Chinese Communist Party’s (CCP) continuing persecution of the spiritual practice known as Falun Gong, practitioners from all over the world participated in an event in which they held up banners and poster boards, handed out flyers, and distributed The Epoch Times on Main Street in Flushing, New York. Flushing has been the site of the CCP’s most recent efforts of persecution against Falun Gong. Practitioners formed a "Great Wall of Courage" in an effort to call upon people's sense of justice and conscience against the continuing persecution. Mr. Hu Ping, a Flushing businessman said in an interview with The Epoch Times that he feels Falun Gong is China's hope and that Falun Gong's spirit of perseverance represents the true character of the Chinese people.

Hu was originally an exporter from Shanghai, China. He emigrated to the United States three years ago. During the last two months, he has witnessed the violent attacks instigated by the CCP against Falun Gong in Flushing. Hu said, “The Flushing attacks against Falun Gong  show that the CCP is almost at its end. In order to divert people’s attention from its own problems, it has even used the earthquake in Sichuan to spread lies about Falun Gong.”

Hu noted that some people found it hard to believe that the CCP was as vicious and mean spirited as what was described on many of the poster boards displayed that day. “I am from mainland China and have witnessed many different kinds of persecution,” said Hu. “I believe what Falun Gong says is true. I absolutely believe the persecution exists. I believed it even more when after May 17, I personally witnessed the CCP mobs attacking Falun Gong here in Flushing, New York“, said Hu.

“In this land of the free, the United States, they can dare to openly persecute Falun Gong without concern, let alone inside China,” continued Hu. “China has a very strong state machine. There is nothing to limit the severity of the persecution of Falun Gong inside of China.”

Hu is a Christian. He said that his beliefs are very different from Falun Gong. However, he admires Falun Gong’s spirit. He thinks this kind of spirit is the hope for the future of China. “In China, many religions that are persecuted do not have Falun Gong’s adherence, tolerance and cohesion,” said Hu. “Many groups often fall into disarray after being persecuted by the CCP. Only Falun Gong gets stronger and stronger,” said Hu. “They don’t fight back after being beaten or cursed and follow truthfulness, compassion, and tolerance.”

“The spirit of Falun Gong represents the true character of Chinese people,” said Hu. “I believe Falun Gong will defeat the CCP!”

Faces of CCP Mobs are Familiar

During the interview, two thugs hired by the CCP were distributing propaganda that defamed Falun Gong. Hu pointed to them and said, "These faces look familiar. These people are thugs. Maybe they haven't thought things over and thus were incited and used by the CCP. Perhaps they have been too deeply immersed in CCP party culture and are unable to pull themselves out."

CCP International Penetration of Political Power is Serious, the U.S. is not Aware of Its Seriousness

Hu raised concern over the international political efforts of the CCP. “This past spring, the Olympic torch was in the United States and Canada,” said Hu. “Wherever it went it was surrounded by an ocean of red flags. This demonstrates that the political power of the CCP extends beyond China into free nations such as Canada and the United States.” Hu believes that the Chinese who attended these events in support of the Chinese government, all received payment from the CCP.

“The United States is eager to do business with China. It doesn’t want to offend the Chinese regime by speaking up about human rights abuses. The gradual buildup of CCP political power in the U.S.A. has largely been ignored. The United States federal government has done little to stop CCP mobs from attacking Falun Gong practitioners in Flushing.”

Hu believes that New York City councilman John Liu and New York State assemblywoman Ellen Young were probably bribed by the CCP. He believes that because Liu and Young did not see the United States federal government take immediate actions against the CCP. He feels sorry for the two elected officials. Hu cautioned the United States not to underestimate the CCP’s ability to infiltrate the American political system.

“Many children of CCP officials buy houses here in the U.S. without any problems,” said Hu. “Where does the money come from? It is from the hard working citizens of China that the government officials squeezed dry!”  Hu pointed out that a few high ranking officials he knows settled their wives and children in Canada, Australia, and the United States. “They are officials of China but do not have confidence in their own regime. In fact, they know clearly in their hearts that the CCP‘s days are numbered.”