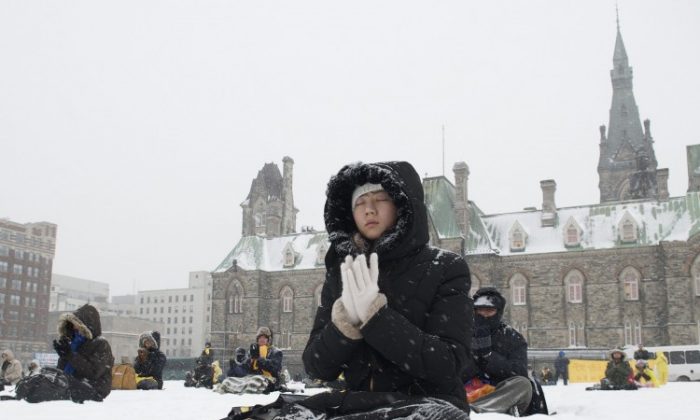 Green Party leader Elizabeth May talks with Lin Mingli and Tianxiao Zhang. Lin Mingli and his brother Lin Shenli had not seen each other in 13 years because one or the other was imprisoned for practicing Falun Gong in China. Zhang’s sister Zhang Yunhe disappeared in China in 2002 after being arrested for practicing Falun Gong. She has not been seen or heard from since. (Donna He/The Epoch Times)
US

OTTAWA—As Prime Minister Stephen Harper prepares to visit China on Feb. 6-12, several hundred Falun Gong practitioners gathered Tuesday on Parliament Hill to ask him to take the opportunity of the trip to urge the Chinese regime to end its persecution of their practice.

Sitting in rows, meditating at times, and practicing the slow-moving standing exercises of Falun Gong at other times, the group also held up large banners displaying their requests.

The group is also seeking the release of all Falun Gong practitioners jailed for their belief, including 11 who are family members of Canadians.

Falun Gong, also known as Falun Dafa, is a traditional Chinese spiritual discipline that consists of a sitting meditation, four standing exercises, and moral teachings based on the core values of truth, compassion, and forbearance, according to the New York-based Falun Dafa Information Center.

As wet snow fell, supportive MPs made their way outside from their duties in Parliament and lent encouraging words.

“I did not want to miss the opportunity to be here with you, I want to do my part to help you remain hopeful in spite of the persecution faced by your loved ones and friends.

“I want to leave one final word that has been in my mind ever since I met Falun Dafa people, and it is a quote that I am sure I am not rendering correctly, but from the great Mahatma Gandhi, something like this.

“He said that tyrants and murderers will always arise, but they will pass away. And truth and love will endure forever.

“And so I know that you are dedicated to truth and forbearance and compassion, and these are values that will last forever. And when you find yourself becoming discouraged, I think it is wise to return to those values and to remember that they are eternal and in the end they will succeed.”

“I am here to encourage you to continue to defend religious freedom. It is one of the fundamental freedoms that we must all enjoy in order to have a successful society. I want to encourage you and support you.

“I am here as a symbol of my support for you. I admire what you are doing, I want to continue to encourage you, and I support you very strongly.

“We need to continue this battle, even though it may be very difficult. We need to stand with each other in order to stand up for what’s right. I appreciate what you are doing.”

Anders told the group he was honoured to be there with friends. He especially noted Falun Gong practitioner Lin Mingli, who arrived in Canada only on Jan. 1 this year, with the help of the Canadian government, after suffering a decade of persecution, imprisonment, and torture in China.

“We ask ourselves sometimes, why are we here. It’s cold, it’s snowing, but with this man who stands next to me, he is a glowing example of why we come out in the cold—because there are other people that cannot assemble, like we are assembled today.

“If they do, they get imprisoned, they get put in slave labour camps, they get tortured, they have organs taken from them. There are all sorts of horrors, the worst human rights violations en masse in the world today, going on, in communist China.

“And I am very, very heartened to be here today with someone who is now free from that oppression. It is for him and for those of our compatriots that suffer that we are here.”

“There are Falun Gong practitioners in my riding who have visited my office and have made sure I am aware of the conditions that Falun Dafa practitioners face in China.

“I am very aware that your practice is one of non-violence, compassion, tolerance, and truth, and that makes it doubly unacceptable that you should be subjected to torture and imprisonment and harsh conditions, only for following a practice that is liberating to mind and spirit.

“You are yourselves like the gentle snowflakes, you do no harm, you do only good, and I am so so much in solidarity with your efforts.”