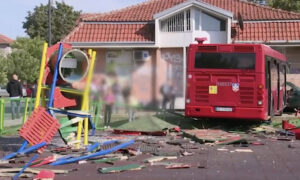 Falun Gong Rallies in Malaysia to End the Persecution

Falun Gong practitioners marched through Klang city in the morning and hold a candle light vigil in front of the CCP embassy in the evening. These practitioners appeal to the people of the world to act together to stop the persecution.

A press conference was held in front of the Klang City Council building. Mr. Raymond Ng, the spoke person of Falun Gong in Malaysia, announced that more than 1 million people in 127 countries have signed the “Million-Signature” petition to stop the persecution.

“CIPFG volunteers and Falun Gong practitioners in more than 40 countries have explained the truth to the world and requested the public to sign the Million-Signature petition, in what is probably the largest anti-persecution campaign in the world.

Ng said that CIPFG in Malaysia has gathered 7242 signatures; 91 of the signatures came from VIPs and experts in different arena.

The rally started at 8:30 a.m., after a press conference. The peaceful group of Falun Gong practitioners crossed the Klang Kota Bridge and marched towards the government administration center and the northern business center. Anti-persecution banners were displayed, demanding an immediate stop the nine years of genocide.

The one-hour rally attracted the attention of Klang residents, and many flyers were distributed along the way. The protesters displayed their banners for 20 minutes near the main bus terminal to express their cause to the passing-by car drivers. The rally finally ended at the Palace of Klang at 10:20 a.m.

“The local police were shocked to know about the persecution of Falun Gong and particularly the living organ harvesting by the CCP ,” said Miss Xie, the organizer of the rally.

According to Miss Xie, the authorities approved of the Falun Gong rally, and there was no police presence during the peaceful rally in Klang.

In the evening at 7pm, Falun Gong practitioners held a candlelight vigil in front of the CCP embassy to commemorate more than 3000 victims of the persecution.

Dressed in white or yellow, Falun Gong practitioners solemnly held lit candles and pictures of some of the tens of thousands victims who have died in China, showing their message to passing drivers. Falun Gong practitioners said a suspected Chinese spy hovered around the edges of the scene, eventually walking inside the embassy after taking pictures of the protesters.