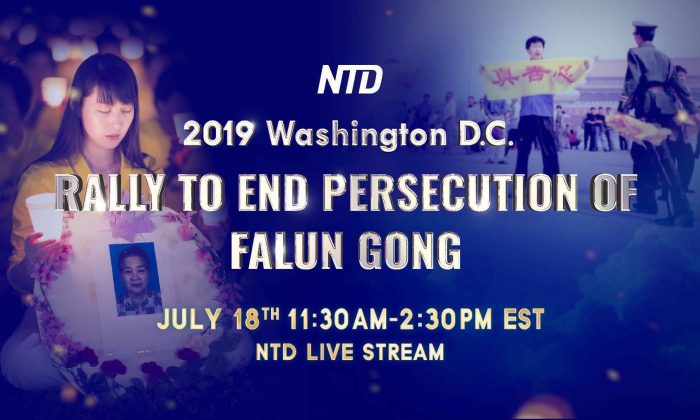 Falun Gong practitioners from around the world will gather in Washington D.C. for the annual rally and march to call for an end of the Chinese communist regime’s brutal persecution of Falun Gong, on July 18, 2019.
China Human Rights

On July 18, Falun Gong practitioners from around the world will gather in Washington for the annual rally and march to call for an end of the Chinese communist regime’s brutal persecution of Falun Gong. Numerous U.S. congressmen and representatives from organizations advocating for human rights or religious freedom will speak at the event to lend their support. This year, NTD will provide live coverage of the events, beginning at 11:30 a.m.

Falun Gong, also known as Falun Dafa, is a traditional self-improvement discipline that includes meditation exercises and is based on the principles of “Truthfulness, Compassion, and Forbearance.” Introduced in China in 1992, the practice quickly gained widespread appeal for its moral teachings and health benefits, spreading to over 80 countries around the world.

Fearing that its popularity would jeopardize the Chinese regime’s authoritarian rule, in July 1999, then-regime leader Jiang Zemin launched a nationwide persecution campaign. For 20 years, millions of practitioners have suffered from illegal abductions, imprisonment, torture, and even became victims of horrific forced organ harvesting. As a result, countless practitioners were forced to leave their homes, jobs, or schools.

The communist regime’s persecution of Falun Gong practitioners in China is the repression of universal values shared by humankind. Communism is not only plaguing the East. It is finding ways to rise from the ashes after the fall of the Eastern Bloc. In China, North Korea, Cuba, and Vietnam, there are outright communist regimes; in Eastern European countries, communist ideology and customs still have significant influence; and in African and South American countries, socialism is practiced under the banner of democracy and republicanism, reported The Epoch Times. It is also taking form and infiltrating American society through various means.

Communism teaches people to oppose belief in God and to cast out the divine, which then warps and corrupts morality and eventually leads humanity on a path toward destruction. The rally and march in Washington this year aims to bring to light the senseless suppression of human rights under the Chinese communist regime and expose communism’s deadly impact on the world.

You can watch the live coverage online by following the links below.