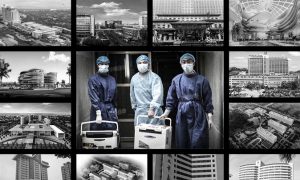 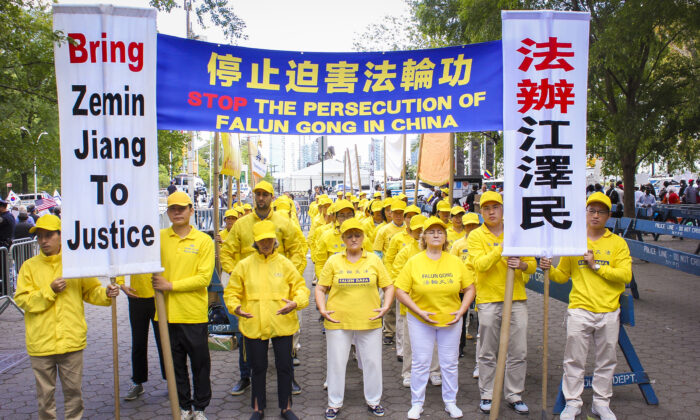 For the past 20 years, the Chinese regime has persecuted adherents of the spiritual practice Falun Gong in an unrelenting campaign involving arbitrary arrests, detentions, brainwashing, torture, and death.

Falun Gong, also known as Falun Dafa, is a meditation practice that includes a set of moral teachings based on truthfulness, compassion, and tolerance. Its immense popularity, drawing an estimated 100 million adherents by the end of the 1990s, was perceived by the communist regime as a threat to its authority. In July 1999, the regime launched a sweeping campaign to eradicate the practice.

Practitioners of the faith group, young and old, told stories at the U.N. Plaza of how the persecution had forever changed their lives.

A Trip Back to China

Among those who shared their stories was Dou Jinmei, 57, who was living in New Zealand when news of the persecution reached her in 1999. For two days, she listened to China’s state media broadcast hate propaganda vilifying the practice. She knew it was false, as she had personally experienced the positive health benefits of practicing Falun Gong exercises. “[The Chinese media] were smearing the practice,” she said.

Hoping to tell the Chinese leadership that the practice was good, Dou and around 20 other New Zealand practitioners flew to Beijing in December 1999. They headed straight to Beijing’s petition office the night they arrived.

As soon as the front desk receptionist learned that they were Falun Gong practitioners, he directed them to the backyard of the building and ushered them onto a bus.

“We looked around and realized that a lot of practitioners were already there, perhaps dozens of them,” Dou said. The bus brought them to the Qianmen Detention Center in Beijing, where they, women, were told to take off all their clothes in front of male prisoners to check for “offensive weapons.”

Dou remembered a group of guards surrounded a female practitioner from the region of Xinjiang and hit her hard when she questioned why they had to do so.

Some were then confined at the Qianmen facility, while others were brought to other detention centers. Detainees were only allowed two restroom breaks per day. “If you urinated or defecated in your pants and they caught it, they definitely beat you up,” she said.

Dou said that during the first night, she lay on a brick bed with all other cellmates right next to each other, “stacked on top of each other,” she said. Her mind was restless.

“We are just regular citizens. … What could be wrong with practicing Falun Gong? Why would [authorities] lock us up here and treat us like this?” she said.

Dou went on a hunger strike, along with several other practitioners, to protest the inhuman treatment. As punishment, the guards tortured her by force-feeding her liquid through a tube that was inserted through her nose to her stomach.

“They said it was milk. … When it was poured into the stomach you knew—it was salty water. It burns your stomach, and it felt like my lungs were about to explode,” she said. “When your lips dried, there was a layer of salt.”

Dou was detained for a month, during which time the guards persisted in trying to get her to renounce her faith.

“If you want to die, I will let you die this moment,” Dou recalled a guard as saying. “If we beat you to death, it will be as good as you committing suicide.”

After another grueling term at another detention center in her hometown, Dou eventually escaped back to New Zealand in May 2000, with the help of a Chinese official who took pity on her.

“The [Chinese regime] has been persecuting us for 20 years; the world leaders should be clear by now and stand up to stop it,” Dou said.