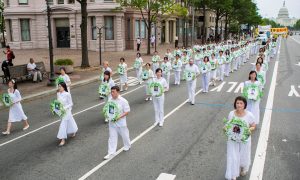 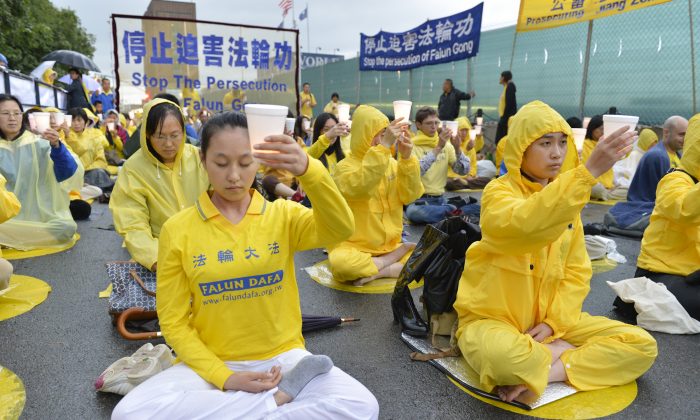 NEW YORK—Xiong Wenqi, 41, wears a yellow polo shirt with the words “Falun Dafa” written in English and Chinese. He wears glasses with thin black frames, grey khakis, and black crocks. He looks like any regular guy you’d meet on the street, but under his shirt, a gruesome scar stretches across his stomach.

In China, Wenqi worked for the Chinese government. He had the kind of position people called an “iron rice bowl.” It’s the kind of job that you never worry about losing, the kind that could get you a beautiful wife, and the kind you can raise a family on.

Yet, for Wenqi and an estimated 100 million others in China, that life was torn from his hands on July 20, 1999. Over the last 14 years he has been beaten, imprisoned, tortured, and had his dreams crushed by a persecution against his belief in truthfulness, compassion, and tolerance—the core tenants of Falun Gong, also known as Falun Dafa.

On Saturday, July 20, 2013, Wenqi stood across the street from the Chinese consulate in New York City, part of a peaceful protest marking the years since the Chinese regime launched its persecution against Falun Gong. Nearby, close to 300 people sat in meditation or quietly did the standing exercises of Falun Gong, which resemble the well-known martial arts practice tai chi, or even yoga.

Wenqi now lives in Flushing, Queens, but will never forget his time in Shanghai. “The persecution impacted me both mentally and physically,” he said, through a Chinese interpreter.

In 2000 he was sent to a “reeducation through labor” camp as punishment for his beliefs. There, he and other practitioners were forced to make teddy bears and soccer balls, with daily rounds of beatings, torture, and propaganda meant to force them to renounce their beliefs.

“My family didn’t know what happened to me in prison,” he said. “I couldn’t tell them anything about the persecution in prison, or they would persecute me worse.”

Three other inmates were assigned to monitor him. When they were in the prison cell, they would make him sit on a stool without moving a muscle. If he moved, they would beat him. Over time, he said, his skin started to attach to his pants.

Other times, the monitors would force him to watch videos defaming his beliefs. Using his hands and body to tell the story, he demonstrated how the prisoners would hold him in place, grasp his arms, and forcefully lift his chin if he tried looking away.

“They tried all kinds of approaches to ‘transform’ me,” he said.

Wenqi, like many Chinese immigrants who practice Falun Gong, is in the United States on asylum. Yet, like Wenqi, most have refused to keep quiet as long as the persecution is going on.

According to the Falun Dafa Information Center (FDIC), the Chinese regime had tried to eradicate all forms of religion from China.

“To this day Roman Catholics, many Protestants, and Tibetan Buddhists cannot worship freely in China and are at constant risk of detention and torture,” states the FDIC website. “By 1999, Falun Gong became a natural target as it was the largest—and fastest growing—spiritual group in China with 100 million practitioners nation-wide, according to Chinese Government reports at the time.”

FDIC notes several torture methods commonly used on Falun Gong practitioners, ranging from beatings with electric batons, to stretching their limbs through various means, to using them as sources for live organ transplants.

At the protest on July 20, some people passed out fliers and some held banners. Some talked to passersby, hoping to tell them about the horrors in China.

“Many of my friends were persecuted to death,” said Wei Lisheng, 34, through a Chinese interpreter. “I’m very lucky to be here.”

Lisheng also spent eight years in a reeducation through labor camp in Changchun. The police had raided his home on September 28, 1999, shortly after the Chinese regime banned the practice that had once been promoted by the regime for its health benefits.

After he got out, he knew his life in China was over. He couldn’t get a job, and was later placed on the Chinese regime’s wanted list. His only crime was his belief.

He was left on the run from the Chinese authorities, living on the streets before fleeing to Thailand in 2007. He was granted asylum in the United States and moved to Flushing, Queens, less than two months ago.

“I’m going to use my time well to let the world know about the persecution,” he said, explaining why he joined Saturday’s protest.

As the sun set, people lit candles for a memorial to those who lost their lives in the persecution against Falun Gong.

Wang Sufen is 82 years old. Every day since 2001—rain or shine or snow—she comes to quietly protest in front of the Chinese consulate in New York. Joining the July 20 protest seemed only natural.

She will never forget the day the persecution against Falun Gong started, Wang said, though a Chinese interpreter. “Each year I think of that time.”

On July 20, 1999, police barged into her house, forced her to turn on her television, and made her watch newscasters reading off the propaganda that would be the mouthpiece of the Chinese Communist Party’s persecution against Falun Gong.

The TV programs Wang was forced to watch were run through the Ministry of Propaganda. According to FDIC, “As in every genocide of the twentieth century, central to the persecution of Falun Gong has been a hate propaganda campaign of enormous proportions.”

Yet, Wang approached the propaganda like most practitioners of Falun Gong have. “I felt very sad,” she said. “I explained that what they were saying wasn’t true.”

Although the persecution still lasts to this day, and although at least 3,716 Falun Gong practitioners are confirmed to have been tortured to death, Wang says that speaking with Chinese people coming in and out of the consulate over the years has left her hopeful.

“I sense that people are changing,” she said. “I’m really optimistic for the day the Chinese Communist Party will collapse.”