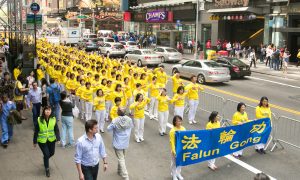 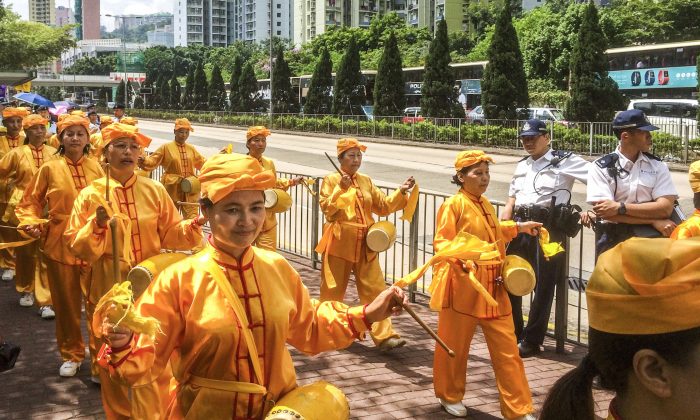 HONG KONG—About 700 Hong Kong and Taiwan residents marched through the streets of Hong Kong over the weekend to mark the Communist Party’s sixteen year-long persecution of a spiritual discipline.

In the early afternoon of July 18, the practitioners of Falun Gong—a qigong meditation practice that comprises five sets of slow-motion exercises and the teachings of truthfulness, compassion, and tolerance—walked 3.4 miles from the residential town of Cheung Sha Wan in central Kowloon Peninsula down south to its tip in Tsim Sha Tsui, an area famed for its upscale tourist shops and many museums.

“I’ve never seen such a spectacular parade before,” said Ms. Peng, a Chinese tourist and parade bystander who hails from the southwestern Chinese city of Chongqing. “Hong Kong really has a free environment, unlike on the mainland.”

“A lot of young people are here today because they are keen to speak up for Falun Dafa,” said Sean Tsai, a 17-year-old Falun Gong practitioner from Taiwan. Tsai, who is looking to study art in college, added he makes an effort to participate in the Hong Kong parade each year.

Like many Falun Gong parades held in past years and around the world, the 2015 Hong Kong edition featured a large marching band and waist drum performers. Regular marchers hoisted banners calling on the Chinese Communist Party to end the persecution, and those with the slogan “Falun Dafa is Good.” This year, a light yellow banner with red and black Chinese characters made its debut: Sue Jiang Zemin.

Encouraged by a tweak in the way legal complaints are processed in China, over 60,000 Falun Gong practitioners on the mainland and abroad have since end May mailed to China’s highest prosecuting body criminal complaints against former Communist Party boss Jiang Zemin.

On July 20, 1999, Jiang had mobilized the state’s security apparatus, and created the extralegal, Gestapo-like body known as the “610 Office,” to carry out his personal crusade against Falun Gong.

Jiang’s campaign has taken the lives of more than 3,800 Falun Gong adherents, and hundreds of thousands have been jailed in the Chinese regime’s brutal suppression of the faith, according to data from official Falun Gong website Minghui. Independent researchers have gathered evidence of a systematic harvesting of organs from an estimated tens of thousands of Falun Gong practitioners by private and military hospitals in China to sell for a profit.

“I think Jiang Zemin is very degenerate,” said first-time parade spectator Mr. Chen from the neighboring city of Shenzhen in Guangdong Province. “When he ran China, there was a lot of internal disorder and suppression of freedoms.”