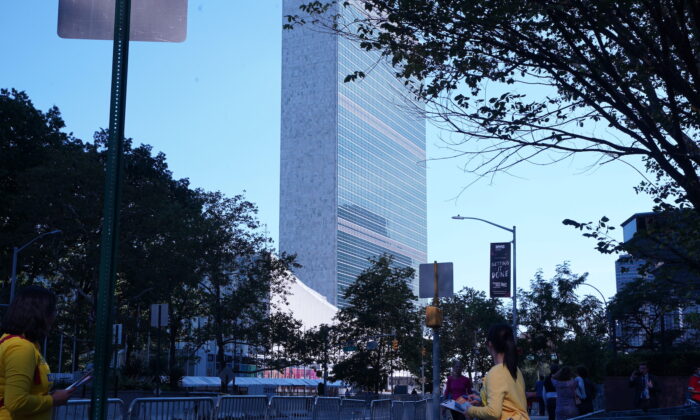 Falun Gong practitioners raise awareness about the persecution of their spiritual practice by the Chinese Communist Party in China, outside the U.N. building in New York, on Sept. 25, 2021. (Enrico Trigoso/The Epoch Times)
US News

NEW YORK—As world authorities gathered in Manhattan to participate in the 76th session of the United Nations (U.N.) General Assembly at its headquarters this week, a group of Falun Gong practitioners quietly meditated and held banners raising awareness about their persecution by the Chinese Communist Party (CCP).

Falun Gong, also known as Falun Dafa, is a spiritual practice that includes meditation exercises and teachings based on the principles of truthfulness, compassion, and tolerance. It grew in popularity during the 1990s, and 70 million to 100 million people were practicing in China by the end of the decade, according to official estimates at the time.

The CCP felt threatened by its popularity and launched a systematic elimination campaign in July 1999. Since then, millions of practitioners have been detained inside prisons, labor camps, and other facilities, with hundreds of thousands tortured while incarcerated, according to the Falun Dafa Information Center.

Jacek Krzywinski, one of the people protesting outside the U.N. building, said he wants to raise “awareness about what’s happening in China. Because they have … no voice over there, so we are over here. We are their voice over here in America.”

One of the evils Tang referenced was the CCP forcibly harvesting organs from detained Falun Gong practitioners, which was confirmed after an extensive review of available evidence by a people’s tribunal in 2019. The Chinese regime then uses the organs in its lucrative organ transplant industry.

Helen Huang was standing at a crossroads a block away from the U.N. building, asking people to sign a petition to end the CCP.

Huang said that if the CCP ends, “First, the Chinese people will have freedom, and more importantly, practitioners of Falun Dafa in China will be free. Many of them are in prison now.”

One of her friends from Shenzhen was imprisoned, she said. The guards shaved off all her hair and she believes added unknown drugs to her food to break her down mentally.

Her husband divorced her because of the persecution. She refused to give up her spiritual belief.