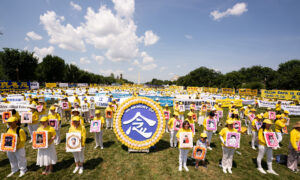 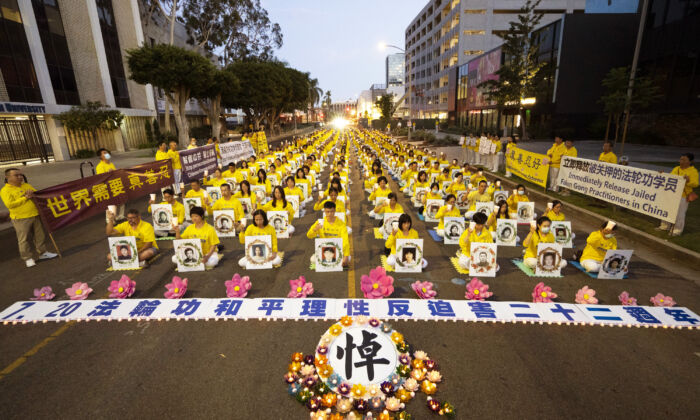 Falun Gong practitioners in a vigil commemorating the 22nd anniversary of the persecution in China, in Los Angeles July 18, 2021. (Courtesy of Debora Cheng)
Southern California

Practitioners at the vigil called for the immediate release of 27 friends and family members currently incarcerated in China for practicing Falun Gong, while some shared experiences of the suppression of their faith.

“Every day from morning to night, I heard the crackling of electric batons and the screams of Falun Gong practitioners when they were being persecuted,” Ding Xiaoxia, a survivor of the persecution, told The Epoch Times.

“The corridors [smelled] full of charred meat. I have also experienced the electric shock of tens of thousands of volts from an electric baton.”

Falun Gong, also known as Falun Dafa, is a traditional spiritual practice that consists of five gentle, meditative exercises and a moral philosophy centered on the tenets of truthfulness, compassion, and tolerance.

On July 20, 1999, the Chinese Communist Party (CCP), under then-leader Jiang Zemin, launched a nationwide campaign to eradicate Falun Gong, after the practice received a following of around 100 million practitioners.

“Out of jealousy of Falun Gong’s popularity, the former secretary of the Chinese Communist Party, Jiang Zemin, started a ruthless persecution toward Falun Gong practitioners on July 20, 1999,” Mandy Huang, the vigil’s host, told the silent crowd.

Millions have been detained, tortured, forced into slave labor, and subjected to immense pressure and “reeducation” for refusing to give up their beliefs. An untold number of Falun Gong practitioners have died as a result of torture or forced organ harvesting.

On July 20, 1999, she was sent to a labor camp and prison, which held hundreds of Falun Gong practitioners, for nearly nine years because of her faith.

She endured 11 days of torture during which four prison guards pulled on her limbs with ropes while she was tied to a bunk bed.

“The four of them stood on the four corners of the bed and shouted together, ‘One, two, three,’” she said. “The ropes were stretched to their limit, then they tied them to the prongs above the bedposts. … At that time, I felt that the four soft ropes turned into four sharp knives; and blood immediately dripped from the places where the limbs were tied.”

The torture lasted for more than 1 1/2 hours three times a day, she said.

“The last time, I was stretched for nearly four hours,” she said.

This experience, and many others, left Xiaoxia with a permanent limp and scars on her wrists and ankles.

Xiaoxia said she has lost 25 friends and family members to the persecution.

Hannah Zhao, a victim of the persecution, learned about Falun Gong in college. After practicing, she became optimistic about life and felt great both physically and mentally.

In November 2012, Zhao was sentenced to 3 1/2 years at the Shanghai Detention Center for distributing flyers to local university students about the persecution of Falun Gong.

Zhao went on a hunger strike while in custody and said she was force-fed violently through her nostrils by prison guards.

“They inserted a very thick stomach tube into my right nostril,” she said. “I couldn’t move. I could only shake my head and struggle. They did it for a long time. The blood from my nose was all over my face. The feeling of poking from the nose and into the stomach was extremely painful.”

In September 2013, Zhao was transferred to Shanghai City Women’s Prison.

While in prison, she said she was forced to “sit for a long time and watch videos that slander Falun Dafa,” and glue together boxes with various chemicals, such as formaldehyde, that caused frequent nosebleeds.

“The high-pressure suppression in the prison made me very depressed for a long time,” she said. “From then on, my mind is slower and my memory declined.”

Zhao’s family hadn’t seen her in more than 10 months when prison guards finally allowed them to see her on the condition that they urge her to quit practicing Falun Gong.

“They desperately wanted to see me,” she said. “The prison guards used my parents’ love for me to force them to write me a letter asking me to give up my faith.”

Dana Churchill, the West Coast delegate for Doctors Against Forced Organ Harvesting, said the CCP’s forced organ harvesting from Falun Gong practitioners has been affecting other prisoners of conscience, “namely, the Muslim Uyghurs, Tibetans, and Christians.”

“What will it take for the doctors of the world to come together and stop these horrific crimes against humanity?” Churchill told attendees. “The selfish, evil deeds of the CCP are affecting all of us, not just the prisoners of conscience in China.”