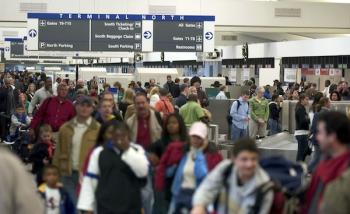 Travelers work their way through Atlanta's Hartsfield-Jackson International Airport in GA, where Louis Lu Yu had been deported by federal authorities on a plane bound for Seoul with a connection to Shanghai. (Barry Williams/Getty Images)
US

By Mary Silver
Print
ATLANTA—An immigrant who sought freedom and an escape from persecution for himself and his family came within minutes of being sent back Thursday afternoon to the authorities who have beaten him in the past.

Louis Lu Yu was to be sent to Atlanta’s Hartsfield-Jackson Airport to catch a plane bound for Seoul with a connection to Shanghai, while his wife, children and a few friends visited the U.S. Customs and Immigration Enforcement field office in Atlanta to ask for mercy.

Federal officials postponed the plan, but Yu is still in federal custody. The judge who is responsible for his case was on vacation during the attempted deportation.

Upon Yu’s close call with deportation, his wife Zhou Feng wept, said Xu Dan, who accompanied Zhou to the immigration office. Xu said Zhou was very sad and no longer felt that America could save them. The couple’s 12-year-old son Jason was very quiet. “He does not know what to do,” said Xu.

Zhou has hired a third lawyer, “a local lawyer with no language barrier with the judge,’ said friend Sam Lu. The lawyer will file an appeal.

Early in the morning on June 15, Yu was driving toward a park to practice Falun Gong (Also known as Falun Dafa). Immigration enforcement agents pulled him over, made him leave his car in a gas station lot, and took him into custody.

According to the court,  Yu is to be deported. Zhou believes both their lives would be in danger if they returned to China.

Yu, 38 years old, is quick to smile, genial, with a few threads of gray in his hair. His wife Zhou Feng, 42, had their second child in March. They have practiced Falun Gong, a spiritual practice of exercise and meditation, since the mid-nineties.

Falun Gong helped bring Yu and Zhou together. Zhou said, “Because of our destiny, we wanted to practice this meditation together, so we got married.”

In 1999 the Chinese Communist Party began a brutal campaign to eradicate the practice. Zhou and Yu experienced the persecution firsthand and decided to leave China to escape it.

Since his arrest, Yu has not been allowed to speak to the press. Zhou gave an interview through an interpreter on June 19, while Sam Lu cradled her newborn daughter Sophie.

The couple and their son  came to the United States from Shenzen, Guandong Province on a tourist visa. They applied for political asylum. “We knew even fake Falun Gong practitioners had gotten asylum, so we thought we didn’t need a lawyer,” said Zhou.

With limited English and no expert advice, they applied. The judge denied their request, thinking that their experiences in China were not harsh enough to justify the United States granting asylum.