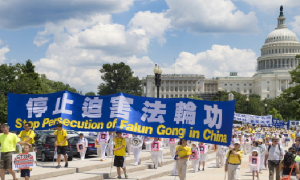 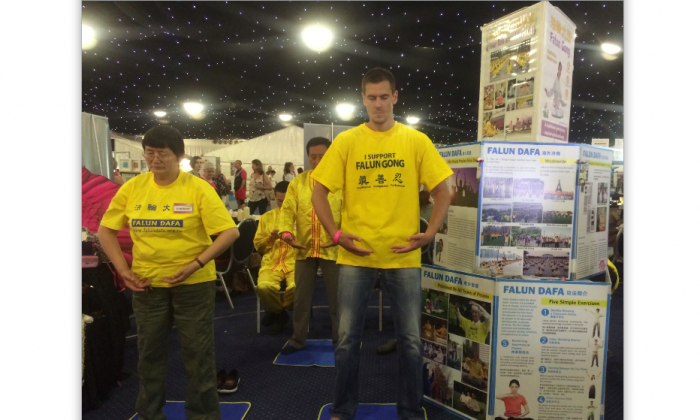 Falun Gong practitioners demonstrated the Exercises at their stand in the Health and Healing Festival in Leeds, UK, on July 12th and 13th. (Epoch Times)
Special

LEEDS, UK–At the Health and Healing Festival in Leeds on the weekend of July 12 and 13, there were about a hundred exhibitors providing people with physical and mental health improvement, spiritual comfort, and complementary and holistic consultations and treatments.

Local disciples of Falun Dafa, also called Falun Gong, had a “Falun Dafa” stand at the festival. Here and also on the stage they performed the slow moving, health giving exercises of the practice. The practitioners came from cities in the North of England including Doncaster, Wakefield, York, Leeds, and Hull, which is over sixty miles away.

The Falun Dafa booth attracted a lot of visitors, some of whom had also travelled a long way. They showed a great interest in the many aspects of Falun Dafa. They raised questions about the efficacy of healing and fitness of Falun Dafa; the persisting persecution in China; whether is it a religion, etc. When answering the questions, practitioners had a calm demeanour and revealed a wide knowledge of diverse and deep parts of the practice.

Many people asked where and when the classes are, how to participate, and so on.

Interesting things happened while the practitioners performed the gentle qigong movements on the main stage.

On the first day, a 2 or 3-year-old child tried to climb onto the stage to perform along with the Falun Gong practitioners. The child was pulled off the stage, crying in disappointment.

On the next day, a little girl about 4 or 5 years old sat on the floor in front of the audience seats and imitated the hand signs of the meditation exercise performed by the practitioners.

Ms. Caroline Grant is one of the organizers of Leeds Health and Healing Festival. She felt sorry that the Chinese Communist Party has cracked down on Falun Gong in China. She said it was really unexpected and unimaginable. “In China there is no freedom of belief,” she said.

She is kind-hearted and used to fund Tibetan children in India helping them stick to their faith in a foreign country.

At the end of the festival, Ms. Grant once again came over to embrace the Falun Dafa disciples.

Ms. Maggie Morris is one of the exhibitors of the festival. She came to the Falun Gong booth, taking a while to read the messages on the posters. She asked, “I’ve got a leaflet on organ harvesting, it is the same group of people?”

When she was told it was, she said she saw an information event by Falun Gong practitioners in Singapore. Later, when she was in Sydney, she was given the organ-harvesting leaflet.

She was very shocked by the leaflet that tells of the nationally organized extraction of healthy organs from live humans who have not given their consent. The predominant group this happens to is Falun Gong practitioners.

Ms. Morris said, “My God, I could not believe it!” She was deeply troubled by the contrast of the peaceful Falun Gong practice and the fate of thousands of practitioners in China. “Such peaceful exercises,” she said, “so beautiful. If you practice this in China your organs might be removed!”

She later expressed an interest in the principles of Falun Gong and the practice.

The Health and Healing Festivals were launched in the North of England in 2007 and have been held in both York and Leeds each year since then.