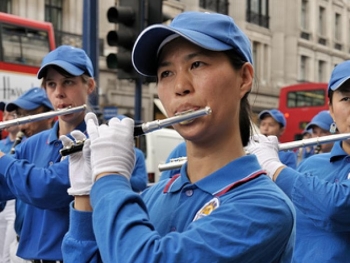 Beethoven's Ode to Joy and brutal torture seem an unlikely combination, but as the Celestial Marching Band—an American-style military band made up of Falun Gong practitioners—makes its way through London's heaving streets, the music may be uplifting, but the message certainly is not.

“Nine years of persecuting Falun Gong in China—end it now!” reads a large white banner billowing behind the band as the parade reaches Piccadilly Circus. People stop and stare, some aghast that such acts can still exist in a China rushing full pelt to the Olympics. Some are simply drawn by the music, and the contrast between it and the photos of family members of killed Falun Gong practitioners, solemnly held on placards.

Falun Gong has been banned in China since July 20, 1999, with over 3000 documented cases of death by torture. The parade through central London on Saturday, July 26, marked nine years of the Chinese regime's persecution.

Speakers at the parade's end in Trafalgar Square expressed outrage that the persecution continues unabated.

“There is no action too barbaric, too low or too deceitful that is beyond the behaviour of the Chinese Communist Party,” said Peter Jauhal, head of the UK Falun Dafa Association. “This has been clearly evidenced for the whole world to see during these past nine years of the savage anti-Falun Gong campaign.”

It's a view echoed by John Dee of the charity Friends of Falun Gong. “It is hard to believe as a normal human being that a government can carry out a systematic persecution of one group of its own people for so long. And even more surprisingly, with such ferocity and violence,” Dee said.

In the run-up to the Olympics the persecution has reportedly escalated, with the Falun Dafa Information Centre disclosing that 1878 arrests across 29 provinces, major cities, and autonomous regions have taken place since January 1st of this year. In Beijing alone, 156 arrests are known to have taken place.

The Chinese Embassy in London was not available for comment.

“Because of the Olympics the persecution has been pushed out of the public view,” said parade organiser Helen Chantry. “Ironically, the Olympics being in China is helping more and more people stand up and say 'We think this is really wrong',” she said.

“I feel very sorry for the Chinese people over there, because they're suffering greatly under that regime,” Chantry added.

The persecution of Falun Gong started nine years ago after an order from then CCP President, Jiang Zemin. There were more than 70 million members of the spiritual group at that time.

Since 1999 more than 100,000 people have been sent to “re-education” camps where they have been tortured, brainwashed and used by the CCP as unwilling organ donors.

John Dee said many Chinese are not aware of the persecution of Falun Gong.

“The Chinese Government gives out so much positive news to their people about how well the economy is developing and how much they are helping the Chinese people to improve their standard of living—and in particular their ties to western democracies who are still willing to do trade with China.”

Dee encouraged western governments to speak out against the CCP's actions.

“We must send out a clear message to the Chinese Government that they must stop the persecution now and must release all Falun Gong practitioners being held against their will immediately.

"Otherwise the Olympic Games and its principles of fair play will be forever tainted with the blood of torture and repression,” he said.