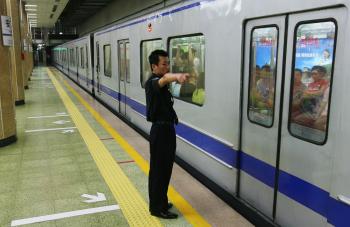 Police in Hebei Province have admitted to placing photos of Falun Gong founder Li Hongzhi on the ground, forcing commuters to step on them in order to pass. (Getty Images)
China

Cindy Drukier
Cindy Drukier is a veteran journalist, editor, and producer. She's the host of NTD's The Nation Speaks featured on EpochTV.
View profile
Follow
biggersmaller
Print
Chinese police have set up a dragnet less than 200km from Beijing to arrest practitioners of the Falun Gong spiritual practice, sources inside the country say. The move is believed to be a result of escalating paranoia over dissent around Olympic time.

In Chicheng City and Huailai County of Hebei province, pictures of Li Hongzhi, the founder of Falun Gong, have suddenly appeared on the ground at train and bus stations. The information was released by New Tang Dynasty Television (NTDTV) – an independent satellite network that has beamed into China since 2001.

Police in Hebei Province have admitted to placing photos of Falun Gong founder Li Hongzhi on the ground, forcing commuters to step on them, says NTDTV.

Chinese Communist officials used the same technique in the early days of the persecution against Falun Gong, to tease out practitioners for arrest, said Kay Rubacek, Spokesperson for the Australian Falun Dafa Association. On July 20, 1999 the regime launched a persecution campaign against Falun Gong that continues today.

"Sadly, this method to isolate and vilify a group within society is not new and is known to have been used to identify Falun Gong practitioners as targets by authorities when the persecution first began in 1999," said Ms. Rubacek.

“It is hard to believe that such an archaic method, reminiscent of the cultural revolution, to 'test' ones conscience in public is being used today in a country granted the Olympic Games,” she continued.

Thomasz Korczynski, University lecturer and Polish coordinator at the Aid to the Church in Need, said this was an act of double defamation.

“It insults both you, and the person being stepped upon, in this case, a person that Falun Gong practitioners have a high degree of respect for,” he said.

"It's insidious. It’s a terrible thing that you are forced to step on another person."

Mr. Korczynski also said this was an old method.

"It reminds me of something applied to Christians during the Cultural Revolution. They would put a cross on the ground, and demand that people step on it, one after another. Those that didn’t were sent to [labour] camps and were later sometimes even killed.”

Security is reportedly extremely tight in Hebei province's Zhangjiakou city, even tighter than in Beijing, say sources from the region who did not wish to be named.

Citizens are required to carry ID simply to go shopping and may be stopped at any time. The local source believes that the extra security squeeze is possible in Zhangjiakou because, while Beijing is teaming with foreigners, including 30,000 foreign media, Zhangjiakou is outside of international scrutiny.

Falun Gong practitioners in Zhangjiakou are suggesting that foreign reporters visit Zhangjiakou to get a "taste" of the situation there.