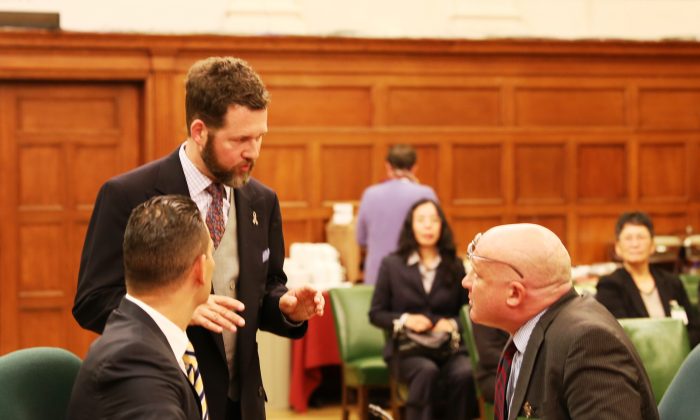 MP Scott Reid, chair of the Canadian Parliament’s Subcommittee on International Human Rights (C), speaks with Dr. Damon Noto of Doctors Against Forced Organ Harvesting (L) and investigative journalist Ethan Gutmann, author of “The Slaughter: Mass Killings, Organ Harvesting, and China's Secret Solution to Its Dissident Problem,” on Oct. 21, 2014. On Feb. 2, 2015, the committee passed an amended motion to name Falun Gong as being among the prisoners of conscience subjected to forced organ harvesting in China. (Donna He/Epoch Times)
Canada

The Parliamentary Subcommittee on International Human Rights has amended a motion to name Falun Gong adherents as being among the groups of prisoners of conscience that are being killed for their organs in China.

“The Subcommittee was disturbed by the evidence it heard that organs were being forcibly harvested for transplant from executed prisoners of conscience and members of religious and ethnic minority groups in the People’s Republic of China, including but not limited to practitioners of Falun Dafa and Uighurs,” the amended motion states.

“Witnesses indicated that police, military, and medical professionals in a number of regions of China were involved in illegal organ harvesting, implicating doctors, researchers, hospital and clinical staff, as well as justice sector professionals.”

Witnesses indicated that police, military, and medical professionals in a number of regions of China were involved in illegal organ harvesting.
— Parliamentary Subcommittee on International Human Rights

Among those who testified at two committee hearings prior to the passing of the motion were human rights investigator Ethan Gutmann and Dr. Damon Noto of the NGO Doctors Against Forced Organ Harvesting. Gutmann is author of “The Slaughter: Mass Killings, Organ Harvesting, and China’s Secret Solution to its Dissident Problem,” which alleges that four prisoner groups are having their organs forcibly removed for profit: House Christians, Tibetans, Uighurs, and Falun Gong.

Gutmann said that Falun Gong adherents are by far the most heavily impacted by the forced organ harvesting, given that there are hundreds of thousands—possibly as many as a million—of them in China’s vast prison system at any given time.

“By 2008, approximately 65,000 Falun Gong practitioners had been harvested for their organs,” he told the committee in October 2014.

Noto noted that several investigations into illegal organ harvesting in China have been carried out, and the results “have all pointed to the use of prisoners of conscience as the main source of organs, with practitioners of Falun Gong comprising the vast majority.”

“If you follow the timeline of China’s transplant boom and you compare it with the start of the persecution of Falun Gong, which occurred in 1999, the timelines correspond almost exactly,” he told the committee.

The committee described the testimony it heard as “troubling” and expressed its “deep concern over the persistent and credible reports of systematic, state-sanctioned organ harvesting” from the groups.