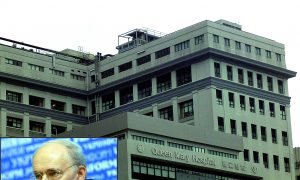 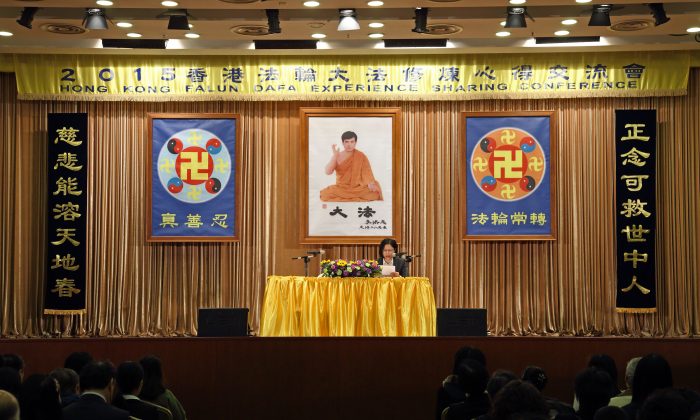 HONG KONG—On the weekend of Jan. 17, Falun Gong practitioners gathered in Hong Kong to share with one another their experiences with the spiritual discipline and to hold a parade to educate the public about how individuals who share their beliefs are persecuted in mainland China.

The experience-sharing conference was the first event of its kind to be held successfully in the city-state in the past three years.

Falun Gong has been persecuted by the Chinese Communist Party (CCP) for 15 years. Since Hong Kong Chief Executive Leung Chun-ying took office in 2012, he has increasingly sought to suppress Falun Gong in accordance with the CCP’s wishes.

According to sources familiar with the matter, Leung helped start the Hong Kong Youth Care Association (HKYCA) and other communist-supported organizations that have attacked Falun Gong information booths and slandered the practice and its founder.

Due to pressure from the authorities, Falun Gong practitioners have had difficulty finding a venue for large events. The organizers and attendees felt the successful conference on Sunday, Jan 18 was a significant event that reflected positive changes in the situation.

“To be able to successfully hold the conference is the frontier for clarifying the facts in Hong Kong,” said Kan Hung-cheung, spokesperson of the Hong Kong Falun Dafa Association.

The Chinese regime has, since it launched the campaign to eradicate Falun Gong in 1999, sought to slander the practice in and out of China. To counter that campaign of propaganda and repression, Falun Gong, practitioners worldwide have spent years “clarifying the facts”—explaining to the public what the practice is and how it has been persecuted in China.

“We are also appealing to people’s conscience to disintegrate the Chinese Communist Party and to oppose the persecution. I think it is really significant,” said Kan.

Kan said that in addition to local practitioners, the crowd at the conference, which numbered in the thousands, came from mainland China, Taiwan, Japan, Malaysia, Singapore, Indonesia, Thailand, Vietnam, and Macau.

In the peaceful and solemn atmosphere of the conference, 21 practitioners from Hong Kong and Taiwan spoke about what they had learned through practicing Falun Gong, also known as Falun Dafa. Some were new practitioners who had only practiced Falun Gong for one year, while others had practiced for more than ten years.

Falun Dafa involves practicing five meditative exercises and living according to the principles of truthfulness, compassion, and tolerance.

Ms. Tam of Hong Kong began practicing in 2011. She volunteered at the Falun Dafa information booths when the Hong Kong Youth Care Association was most actively harassing them.

Ms. Tam said she was framed by the Youth Care Association, but she and her fellow practitioners held the firm thought that she had acted correctly. The judge finally declared her innocent.

Twice the Youth Care Association and police also falsely accused another Hong Kong practitioner, Miss Lee. Although Miss Lee had no knowledge of law, she successfully defended herself, and in the process more people came to learn about the persecution suffered by Falun Dafa practitioners.

Ms. Wang, who came to Hong Kong from mainland China, started practicing Falun Dafa in 2004. She used to have many illnesses, such as severe arthritis, pneumonia, tachycardia, and lumbar damage.

Most of her illnesses improved after practicing Falun Dafa, and she expressed how grateful she is to the practice’s founder, Mr. Li Hongzhi.

Ms. Wang works hard to tell tourists from mainland China about the persecution and helps them quit the CCP and its affiliated organizations to oppose the persecution. It is estimated that she has successfully convinced more than 10,000 people to quit the CCP.

Mr. Chow has used Falun Gong’s standards to improve himself, always asking himself to be a good person. He successfully quit smoking, got rid of his bad temper, no longer criticizes his colleagues, and always considers others’ needs first.

“I feel that Master [Li Hongzhi] wants us to be a better person among good people,” Mr. Chow said. “If everyone practices Falun Gong, this society will be much better!”

Ms. Fan from Taiwan shared about how she used a merciful and benevolent heart to make her family more harmonious and to convince her non-practitioner family members to allow her to come to Hong Kong to clarify the facts.

A march opposing the persecution of Falun Gong was held on Saturday, Jan. 17. Prior to the march was a rally, at which many Hong Kong residents spoke, condemning the Chinese regime’s treatment of practitioners and praising Falun Gong’s principles of truthfulness, compassion, and tolerance.

Teresa Chu, a spokesperson of theTaiwan Falun Gong Human Rights Lawyers, said at the rally that in the new year of 2015, we are walking into a new era in which evil will not triumph.

“From 2013 to 2015, the number of signatures collected worldwide to oppose organ harvesting has reached 1.7 million people, including a joint declaration of 8000 doctors,” Chu said.

Chu explained that there are concentration camps in various parts of China that harvest the organs of Falun Gong practitioners to sell as transplants. She said that according to research, “the CCP is cleaning up all those members, officials, doctors, and medical workers who have participated in live organ harvesting.”

She called on those who have participated in the atrocity to come out to testify.

“If you want to leave yourself a way out, I hope that you come out to expose the locations of the concentration camps and expose those crimes. We will try with all our might to save you, to leave you a way out,” she said.

“I really hope that today’s parade and future parades can enlighten more compatriots from the mainland. Everyone should oppose the persecution, fight for democracy, and end the one-party dictatorship,” Lee said.

“The essence of Chinese culture has a long history, so I feel that the spirit of truthfulness, compassion, and tolerance is a very important moral and social factor for the building of the society,” Wu said.

He condemned the CCP’s crime of organ harvesting. “Using illegal means to obtain human organs as a means of commercialization, slaying them alive, is totally against the most basic human rights and justice.”

Neighborhood Workers Service Centre member Leung Yiu-chung strongly denounced the persecution of Falun Gong practitioners: “It is a violation of human rights, and it is even strongly condemned internationally.”

Leung also believes that the more people who quit the CCP, the better.

Mr. Wu, an investor from Shanghai, had just finished shopping when he came upon the march. He used his mobile phone to record it, while explaining to his girlfriend what he saw.

“This is more attractive than shopping discounts; I didn’t expect to see a Falun Gong parade, and I have gained a lot this time,” he said.

“It is so shocking, really an eye-opener! I’m speechless from the excitement,” Mr. Wu said.

He described the parade as magnificent and able to speak the truth to people’s hearts.

Translated by Veronica Wong. Written in English by Sally Appert