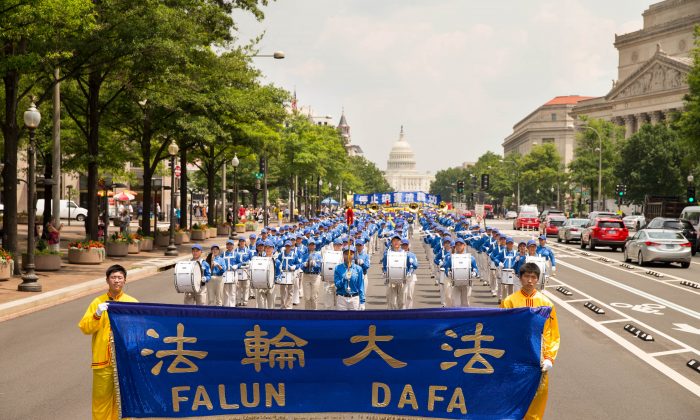 Hundreds of Falun Gong practitioners march in a parade in Washington D.C. on July 20, 2017. The parade is calling for an end to a brutal persecution in China that started on July 20, 1999. (Larry Dye/The Epoch Times)
China

WASHINGTON—In the early afternoon of July 20, over 1,000 practitioners and supporters of the Falun Gong spiritual discipline held a parade to protest 18 years of deadly repression by the communist regime in China. The parade goers, mostly wearing Falun Gong’s signature yellow T-shirts, marched from Capitol Hill through downtown Washington, D.C. to the Lincoln Memorial.

This year’s events also included a rally at Capitol Hill and a candlelight vigil before the Washington Monument.

Falun Gong, a spiritual practice that teaches a set of meditation exercises and cultivation of the principles of truthfulness, compassion, and tolerance, was marked for persecution on July 20, 1999, by then-Chinese Communist Party leader Jiang Zemin. Since then, the Chinese authorities have pursued a violent campaign of elimination against the practice.

“The Chinese regime’s persecution has been completely irrational and violent. We petition peacefully. We carry no weapons. We have only kind intentions. But what we face are police, police cars, armed police. The armed police face you as if you are a terrible enemy,” said You Zhaohe, a 64-year-old philosophy professor who came from Beijing to the United States this March.

His wife, 60-year-old Wang Lurui, was arrested 11 times while unfurling Falun Gong banners and meditating in public, including several occasions when she went to Tiananmen Square. She was also fired from her position as a hospital administrator in Beijing.

“Since coming here, we continue to nonviolently, rationally oppose the persecution so everyone knows that Falun Dafa is good and that truthfulness, compassion, and tolerance are universal moral principles,” Wang said.

Millions of Falun Gong adherents in China and abroad have used a variety of peaceful means to raise awareness about and counteract the persecution, sometimes at great personal risk. Human rights researchers estimate that Chinese authorities have detained millions of practitioners, and that hundreds of thousands are held in forced labor camps and brainwashing centers.

Since 2006, investigations have revealed that a large but yet indeterminate number of Falun Gong adherents have been executed and had their organs harvested in state and military-run hospitals across China.

Li Jianying, a middle-aged woman from Shanxi Province, was driven to escape China in 2015 when someone reported her practice of Falun Gong to the police. She now lives in Middletown, upstate New York, and raises awareness about Falun Gong in the community as a volunteer. Her 79-year-old mother is still in China.

“I want to see her again, but I can’t go back,” Li said. “You go back and they arrest you at the airport.”

Each year, Falun Gong practitioners in the U.S. and around the world hold commemorative events to mark the anniversary of the persecution.

During the parade, practitioners carried banners calling for the end of the persecution and live organ harvesting and for Jiang Zemin to be brought to justice. A military-style marching band composed of Falun Gong practitioners joined in. Other marchers held photos of those who had been killed in the persecution.

A Life Devoted to Truth Comes With Huge Risks in China

Passers-by were shocked to learn of the violence against the group.

Wilna LaPorte, who works in a Washington, D.C. public defense service, was drawn to the serene, traditional Chinese music.

“I can’t believe this is going on,” she said between tears after hearing about China’s organ transplantation industry, which has heavily targeted Falun Gong practitioners. “I don’t see why human lives should be commercialized when there are so much that has already been commercialized from China.”

“People need to be made aware of what’s happening in different countries, not only here,” said Cynthia Simms, who works as an educational administrator.

“A lot of times, we don’t know what other people go through and what they have to deal with on a day to day basis.”

You Zhaohe, the former professor from Beijing, said that the Chinese authorities “persecute all independent thoughts, independent beliefs.”

He added: “There’s no freedom of belief, freedom of speech. This is the most immoral thing done by the Chinese regime. They don’t just destroy you physically, but also destroy you mentally, force you to ‘transform.’ They stifle your thoughts so you do not have your own thoughts.”

With reporting by Eva Fu and Irene Luo.