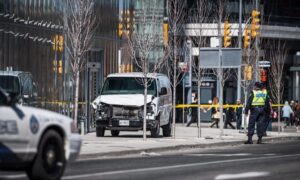 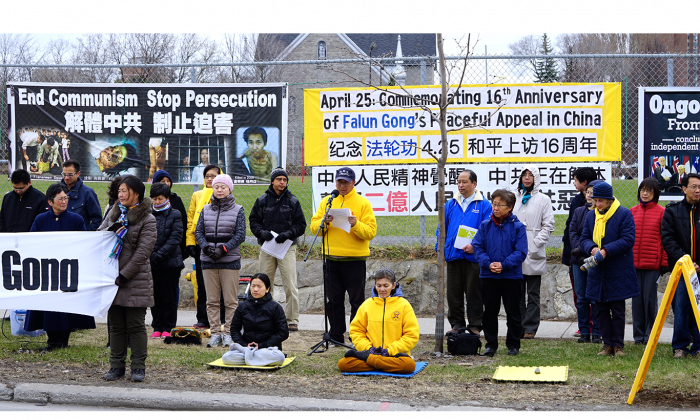 Adherents of Falun Gong, also called Falun Dafa, gather across the street from the Chinese embassy in Ottawa on April 24, 2015, to commemorate the peaceful protest 16 years ago, on April 25, 1999, when 10,000 Falun Gong practitioners gathered in Beijing to call on the central government to allow them to practice their faith free from harassment. (Pam McLennan/Epoch Times)
Canada

Why April 25 is important
By Pam McLennan
biggersmaller
Print

OTTAWA—Ottawa Falun Gong practitioners as part of a nationwide and worldwide demonstration took to the grassy area across the street from the Chinese embassy on Friday, April 24, to mark the 16th anniversary of a remarkable appeal for freedom of belief that occurred on April 25, 1999, in China.

That date evokes strong memories for those among the 10,000 who went to the appeals office near Zhongnanhai, the central government compound in Beijing, to ask the authorities to release the Falun Gong practitioners recently arrested in the nearby city of Tianjin and to allow Falun Gong, also called Falun Dafa, to be practised in China without fear or harassment.

As Chinese citizens, they had a constitutional right to appeal, and they wanted to ensure the future of their faith in their homeland.

“Falun Gong is a system of meditation and spirituality that combines gentle ‘qigong’ exercises and a philosophy based on Truthfulness, Compassion, and Tolerance,” according to the faluninfo.net website.

As Chinese citizens, they had a constitutional right to appeal, and they wanted to ensure the future of their faith in their homeland.

First introduced to the public in China in May 1992, the practice spread quickly by word of mouth due to its benefits to people’s health and well-being. By the late 1990s 70 to 100 million people had taken up the practice, according to Chinese government statistics.

Practising meditation, doing healthful exercises, following moral principles, and even protesting to one’s government are ordinary occurrences in democratic countries. But the Communist Party in China keeps a tight rein on any activity it deems subversive no matter how legal and peaceful it may be. And often, those appealing to the government are taken into custody and face brutality.

What makes the April 25 demonstration remarkable is that 10,000 Falun Gong adherents showed up at the Central Appeals Office, willing to risk arrest to participate in the protest.

They came out of a desire to protect the one most important thing in their lives they said was good and had improved them physically, morally, and spiritually. By all accounts the group was quiet and orderly.

Several events had earlier occurred between June 1996 and April 1999, including the banning of the book of Falun Dafa teachings and the repeated publication of slanderous articles misrepresenting the practice.

The April 25 appeal took place after the arrest of 45 adherents in Tianjin, a city 80 km from Beijing, who were responding to a recently published negative and inaccurate article about Falun Gong.

During the April 25 appeal, three practitioners met with then premier Zhu Rongji to ask for the release of the people arrested in Tianjin and for protection of Falun Gong practitioners’ right to follow their beliefs.

Zhu agreed to allow Falun Gong to be practised freely and by nightfall the arrested people in Tianjin were released. The demonstrators dispersed quietly and went home, trusting that the Chinese leaders would follow through on their promises.

Despite the peaceful, non-political nature of both the demonstration and the practice of Falun Gong itself, Jiang Zemin, then leader of the Chinese Communist Party, three months later launched the nationwide, systematic persecution against Falun Gong that continues to this day.

The New York-based Falun Dafa Information Center has confirmed the deaths of 3,553 practitioners and thousands more deaths are in the confirmation process. Reports of killing Falun Gong prisoners of conscience for their organs document 65,000 deaths from 2002 to 2008. It is difficult to ascertain the total figure to date.

The faluninfo.net website states, “A Falun Gong practitioner dies of abuse in police custody once every three days (and those are only the cases we know about).”

Following their investigation launched in 2006 into the organ harvesting, Matas and former Canadian cabinet minister David Kilgour co-authored a book on their conclusions.

“Bloody Harvest” provides an abundance of evidence and states that the documented killings and disappearances of Falun Gong practitioners annually exceed by far the totals of any other victim group. Moreover, Falun Gong represents two-thirds of torture victims and half the people in forced labour camps.

Matas and Kilgour call the persecution of Falun Gong “the kernel at the centre of human rights violations in China.

‘If everyone practiced Falun Gong, China would have great hope’

Several speakers at the Ottawa event talked about the significance of the April 25, 1999, appeal and the subsequent persecution of Falun Gong in China.

Li Zhou (an alias) is a 77-year-old Chinese woman who participated in the April 25 appeal in Beijing.

“Even though it has been over 16 years, what happened on April 25, 1999, is still clear in my mind. On the evening of the 24th the local assistant told us what happened in Tianjin (the arrests) and he said that tomorrow we could go to appeal,” said Zhou.

The following morning she and two neighbours, who also practised Falun Gong, took a cab to Zhongnanhai, the site of the appeal.

“When we got there I saw that the whole street was crowded with people. During the whole day we didn’t make any noise, we just quietly stood there. Some people would bring us food, water, and cooked eggs. I also went and bought some cooked eggs and gave them to the practitioners there,” she said.

When later in the day they were told that the government had agreed to allow them to practise their faith and that the people arrested in Tianjin had been released, she and her friends decided to go home.

“Someone gave each practitioner standing there a plastic bag so they could pick up any litter on the ground. We left at about 11 p.m. I thought that Falun Dafa is so good, if everyone practised Falun Gong, China would have great hope,” Li said.

Despite Premier Zhu’s reassurances on that day, the persecution that began in July 1999 in China persists today. Several people in Canada have relatives who have been jailed for practising Falun Gong.

Supporters at April 25 commemmorative events held across Canada this weekend protested and condemned the recent sentencing of Xiaobo Li and Yinghua Chen, who have family members in Canada.

On April 21, Li, despite his poor health, was sentenced to eight years in prison. His son, Paul Li, is a Canadian citizen who lives in Toronto and has appealed to Minister of Foreign Affairs Robert Nicholson to urge the Chinese regime to release his father.

Yinghua Chen, the daughter of a Canadian citizen, was sentenced to four years in jail on April 10. She was arrested in March last year as she accompanied her niece, Bian Xiaohui, to attempt to visit Bian’s father imprisoned for practicing Falun Gong.

When Bian’s request to see her father was denied, she protested in front of the prison, holding a banner saying, “I want to see my father.” Both Chen and Bian were subsequently arrested.