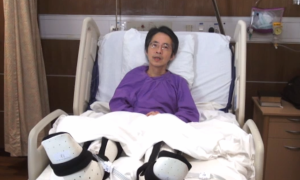 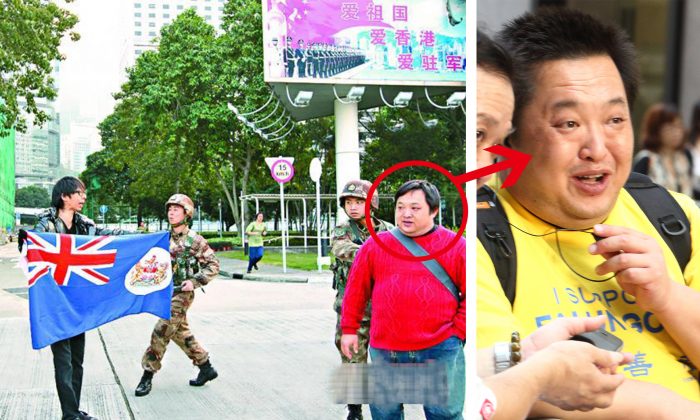 Dickson Cheung Han-yin and other members of Hongkongers Come First broke into the People’s Liberation Army garrison to protest (L). Cheung was also spotted on the street pretending to be a Falun Gong practitioner in an effort to portray Falun Gong in an internal conflict on Sept. 20, 2014 (R). (Epoch Times composite photo)
China

HONG KONG—A group of people in yellow shirts resembling Falun Gong T-shirts stood near a Falun Gong information booth in Hong Kong on Sept. 21. However, they held banners with slogans that slandered Falun Gong and used loudspeakers to harass those at the site.

The real Falun Gong practitioners at the site were holding a peaceful demonstration to raise awareness of the persecution their fellows are suffering in China. The impostors are thought to be supporters of the Jiang Zemin faction of the Chinese Communist Party (CCP) aiming to discredit Falun Gong in public.

Dickson Cheung Han-yin, the founder of a Hong Kong independence group, was recognized among the impostors. His group, called Hongkongers Come First, is known as an independent group that advocates Hong Kong’s separation from China.

This has raised suspicion that Cheung and his group are also supported and manipulated by the Jiang faction.

Activists in Hongkongers Come First broke into the CCP’s People’s Liberation Army (PLA) barracks in Hong Kong last December. Epoch Times later reported that the Jiang faction supported the break-in to create a reason to legislate Article 23, the anti-sedition legislation that was defeated in 2003 after massive popular condemnation of it.

Recent efforts at reviving Article 23 are aimed at silencing anti-CCP voices in Hong Kong, including those of Falun Gong practitioners.

Cheung’s group returned on September 22 to harass Falun Gong practitioners again. They tried to stop the practitioners from explaining the facts of the persecution to passersby.

They also attempted to provoke the practitioners, trying to make the public think Falun Gong was having an internal conflict. Police stopped the group from approaching the Falun Gong demonstration site, and some passersby scolded the impostors for their behavior.

Core HKYCA member Chan Kin-wah was video recording the incident. Some citizens and a policeman recognized people among the fake practitioners as members of Hongkongers Come First.

Falun Gong practitioner Ms. Lau confronted Cheung about what he was doing. Cheung replied that he had received orders from the Epoch Times management level, and they had told him there was a big internal conflict in the Falun Gong group.

When Epoch Times contacted Cheung on Sept. 21, he denied all his previous statements. He said it had nothing to do with Wong, and he wanted to elaborate further when meeting the reporter in person later.

Cheung said he was set up by others, and he had persuaded other members to leave the site. However, the group did not leave until 6pm, around the time the Falun Gong demonstration ended.

Epoch Times got in touch with Nelson Wong Sing-chi, who had just returned to Hong Kong. Wong reported that he had not been in contact with Cheung for a long time and had no idea what was going on.

“They put on Falun Gong T-shirts and create a disturbance at the Falun Gong demonstration site, attempting to harass and provoke practitioners, aiming to create a spurious impression that the Falun Gong group is splitting, so they can take the opportunity to discredit Falun Gong and instigate hatred.”

“Needless to say, those people are accomplices of the CCP, helping the Jiang Zemin faction continue the persecution.”

Kan urged authorities to investigate the case and bring the thugs to justice. He also warned those who are still assisting the CCP’s evildoing that what goes around comes around.

The HKYCA members distributed flyers that slandered and discredited Falun Gong, and one of the members attacked a practitioner violently. They intended to create chaos on the street to help get Article 23 passed in an attempt to silence Falun Gong in Hong Kong.