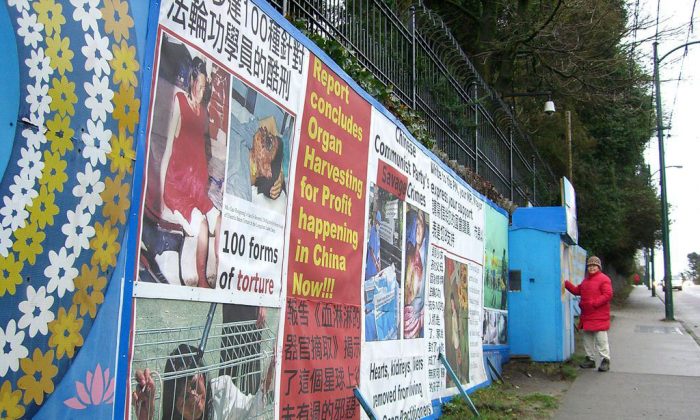 This 2004 file photo shows a Falun Gong adherent standing near the hut and signs erected outside the Vancouver Chinese consulate to protest the brutal treatment of fellow adherents in China. The Vancouver Falun Gong have launched a court challenge to have a street bylaw ruled unconstitutional in the hopes of resuming their round-the-clock vigil outside the consulate. (Epoch Times)
Canada

Vancouver Falun Gong practitioners are back in the B.C. Supreme Court this week to have what they deem an unfair bylaw ruled unconstitutional in the hopes of resuming their round-the-clock vigil outside the Chinese consulate on Granville St.

The group had protested on the grassy space outside the consulate from 2001 to 2009, when the City of Vancouver took them to court and had their billboards and small hut removed, saying the structures contravened a street and traffic bylaw.

Falun Gong appealed, and in October 2010, three B.C. Court of Appeal judges unanimously ruled that the structures are a form of political expression protected by the Charter, that the bylaw is unconstitutional, and that the previous judge had erred.

The city was given six months to revise the bylaw to conform to the Canadian Charter of Rights and Freedoms, and it is the revised bylaw that has brought the group back to court this week.

They argue that the amended bylaw infringes on their right to free political expression and places onerous restrictions on their ability to mount an effective protest outside the consulate.

On Monday, Falun Gong’s lawyer Cameron Ward told the court that the bylaw is “unreasonable, bordering on the ludicrous,” and “draconian” in its application.

“The City of Vancouver says it will dictate when, where and how citizens will express themselves,” he said. “The city’s dictatorial approach is repugnant to Canadian values and more like regimes like the People’s Republic of China.”

The bylaw stipulates that the structures can be up only between 8 a.m. and 8 p.m. and only for 30 days out of 60 (after which a new application must be submitted), and the total structure area was reduced to 1m x 1.6 m x1.6 m.

City of Vancouver lawyer Iain Dixon said Tuesday that although the bylaw does restrict rights under the section of the Charter that guarantees freedom of expression, restricting such protests is part of the city’s duty to maintain public order and ensures all citizens can enjoy public property.

But Ward argued that while balancing freedom of expression and generally regulating city streets, the various limits set out in the amended bylaw are not a minimum impairment of Falun Gong adherents’ right to free political expression and any benefits are vastly outweighed by the deleterious effects. He said it is also not proportionate—both of which are required by the Charter.

The group’s long-running vigil outside the consulate initially began with a hunger strike relay to oppose the inhumane treatment of 130 of their fellow practitioners held in the notorious Masanjia labour camp in China.

Before long, the hunger strike became a 24/7 vigil to call attention to the brutal, wide-ranging persecution of Falun Gong practitioners in China that began in July 1999 and continues today.

Vancouver Falun Dafa Association spokesperson Sue Zhang says the protest is necessary because it exposes the human rights violations against Falun Gong practitioners in China and is also an embarrassment to the Chinese regime.

“Our 24/7 vigil was very effective,” she says, adding that “the commitment to making a stand against the genocide happening right now until the crime has stopped is itself our political expression.”

Zhang alleges the protest became a thorn in the side of consulate officials, who over the years tried to pressure the city to get rid of it.

In August 2008, former Chinese consul-general Yang Qiang told the media that the only thing he regretted during his term was that he was unsuccessful in persuading the city to end the protest, although he had tried many times.

Former mayor Larry Campbell has stated that two former consul-generals had approached him about the issue, but because Canada respects free speech and freedom of belief, he did not take any action.

However, former mayor Sam Sullivan ordered the protest dismantled in 2006, and that was when the case first went to court. Sullivan, who speaks Mandarin fluently, visited China several times and was friends with ex-consul-general Yang Qiang. Sullivan has denied he was pressured to end the protest.

On April 7, 2011, during deliberations on the bylaw revisions, both the city engineer and city manager stunned those present by openly admitting that Vancouver had consulted with the Chinese consul-general as a “stakeholder” before drafting the new bylaw.

Both Ward and Dixon summed up their arguments in court on Wednesday. The judge’s decision is expected in a few weeks.