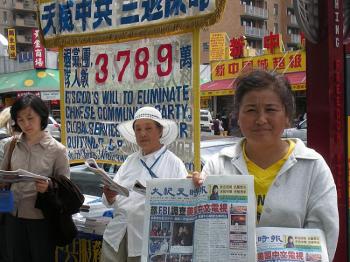 Volunteers at the service center for quitting the CCP outside public library in Flushing, New York City. (Li Jia/The Epoch Times)
US

The table, set up across the street from the Queens Library on Main Street in Flushing, was manned by at least ten individuals. Just across the sidewalk, an additional stand has been set up by the group. The stand, which has a large Chinese communist flag and an American flag sticking above it, has hateful slogans against Falun Gong written on it.

Standing nearby were a few Falun Gong practitioners in peaceful protest. One of them, Hua Du, who is a resident of Flushing, explained why they felt it important to be there. “It’s our good wish that this type of thing will not continue in the community because those things are only spreading hatred and inciting some people,” said Du. “We’re very concerned.”

“We hope that people in the community will be more aware of this,” said Du.

Standing close by, handing out copies of the Chinese edition of The Epoch Times was Helena Buren. Holding a small bundle of newspapers beneath her arm, Buren, a Falun Gong practitioner of ten years, said that she wanted to help clear up any misconceptions that people might have of Falun Gong.

As Buren started talking, a Chinese man working at the table with the hate propaganda began to shout loudly in Chinese at her. Buren didn’t seem to be moved and continued to speak. “I don’t mind really,” said Buren, who paused for a moment before saying, “I feel sad for them. They’re so misled by their own government, by the propaganda.”

“I feel sad for them,” Buren said again. “I want to reach them but it’s very hard.”

While speaking, Buren calmly passed out the newspapers to people walking by. Many Falun Gong practitioners choose to pass out copies of The Epoch Times in Flushing due to the paper’s coverage on the persecution of the practice.

As she spoke, the crowd at the table across the sidewalk continued to grow louder. One of the women began to loudly chatter about Falun Gong in Chinese, her voice sharply directed towards Buren, while another man in the group started to yell slogans at Buren in Chinese.

“It’s very bad,” said Buren. “It’s bad for them and bad for the people who get the materials because they, in turn, spread the propaganda that they are misled by.”

Sitting in meditation close by, holding a small sign about the persecution of Falun Gong in China, was Jasper Seren, who had come to Flushing all the way from Calgary, Canada to help talk with people and to dispel rumors being spread against Falun Gong.

As Seren continued to speak, a man and woman working at the propaganda table began to shout in Chinese. One man from their group wearing a homemade shirt with hate slogans scribbled on it then walked over to stand next to Seren while others still at the table started to clap and cheer the man on. Seren didn’t pay much attention. When asked how he felt when the people from the hate propaganda table behaved like that, Seren said, “I just see it as a situation where their minds are poisoned.”

As the group at the table across the sidewalk continued to grow louder and louder, police arrived on the scene. The police quieted the group, telling people to move along. One Taiwanese man approached the police and told them that one of the men who works at the hate propaganda table had threatened him a few days prior, pointing to a Chinese man in a black shirt with black sunglasses.

According to the Taiwanese man, although he does not practice himself, he had been threatened because he supports Falun Gong practitioners. He said that the man in the black shirt had threatened to beat him for his support while a woman who worked there took a photo of him.

The Taiwanese man didn’t want to be interviewed, as he was “afraid” of the people who work at the table that spreads the hate propaganda.

Attempts to interview workers at the hate propaganda table were unsuccessful.