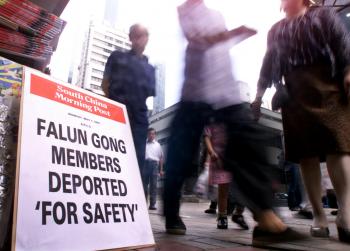 People walk past a newspaper headline announcing the deportation of two Falun Gong practitioners on a street in Hong Kong on May 7, 2001. (Peter Parks/AFP/Getty Images)
International

Freedom, Asylum, and the Walls of the 21st Century

Nataly Teplitsky
View profile
Follow
biggersmaller
Print
The history of forced illegal deportations of Chinese Falun Gong practitioners seeking asylum around the world goes back to 2005. Since this time, individuals and families with small children who were under the protection of the United Nations High Commission on Refugees (UNHCR) have been expelled from countries such as Germany, Russia, and Korea and sent back to China, where severe persecution of Falun Gong practitioners has been going on for more than 10 years.

Most recently in Israel, eight Chinese Falun Gong practitioners’ requests for refugee status were rejected. They received letters which read that “it has been determined that there is not a reasonable possibility that you will suffer serious harm if you return there.” They were “required to leave the country within two weeks.”

Currently, the practitioners are in the process of appealing this decision.

The Epoch Times asked Michael Horowitz, director of the Hudson Institute’s Project for Civil Justice Reform and Project for International Religious Liberty, to comment on the most recent deportations and the possible repercussions that participating countries could face.

Epoch Times (ET): Mr. Horowitz, how legitimate are these refusals to grant asylum from a legal standpoint?

Michael Horowitz (MH): From an international perspective, the certainty that Falun Gong practitioners will be brutally persecuted by the Chinese makes them legitimate asylum claimants. There is no meaning to the concept of asylum if Falun Gong practitioners are ever put at risk of deportation to China. The whole asylum process is for the purpose of avoiding people being sent back to their home countries, where they will be persecuted. And for Israel to even contemplate the possibility of sending Falun Gong practitioners back to China, where there is clear evidence of arrest, brutality, persecution, and even organ harvesting, is unthinkable. That’s in terms of the policy side.

Years ago, Israel was involved in trafficking women from the former Soviet Union, and I led the effort to bring American and international condemnation on Israel for doing that.

I am a Jew, who has great feeling and pride in the state of Israel and it did not make me happy to do it, but I thought it was important.

Now, again, I’ve rolled up my sleeves and I am ready to lead whatever effort it takes to make sure that Israel never, ever deports a Falun Gong practitioner back to China. If they should ever consider doing so, there will be broad condemnation from pro-democracy leaders around the world, including those members of Congress who offer their support and disapprove of persecution of Falun Gong practitioners in China.

There is another irony here and a powerful one. This is that Falun Gong practitioners, through The Global Internet Freedom Consortium (GIF), are playing a central role in assisting the demonstrations and revolution in Iran.

ET: The GIF created a cutting edge technology which allows Internet users in China, Iran, and other countries to break through regime-installed firewalls and freely access the Internet. Can you elaborate on the connection you’ve made between the GIF and Israel’s denials to grant asylum to Falun Gong practitioners?

MH: Falun Gong practitioners are the people who have developed this technology and provided the means by which demonstrators in Iran and other totalitarian states can access the Internet, can communicate with the outside, can send YouTube photographs of the brutalities, and can Twitter each other to plan demonstrations against oppressive regimes. This all has been made possible by the Falun Gong community and for Israel to be in the business of putting these people at risk of deportation back to China is unacceptable and intolerable.

Israel should be deeply grateful to Falun Gong practitioners because the largest single strategic threat to Israel is of course the government of Iran. The last thing Israel wants is to be condemned by the Iranian pro-democracy dissidents.

MH: This is a lunatic government, whose president has said nice things about Hitler.

The government of Iran is just about to make a cabinet minister of somebody who was involved in blowing up a synagogue in Buenos Aires with about 60 to 70 Jews in it, and who is on the Interpol wanted list. He is now being appointed a cabinet minister. It is the young people demonstrating in the streets against this gangster regime that gives hope that it will be out of power.

The Falun Gong community and GIF consortium have really come to understand that the issues at hand are not only applicable to China, but are equally relevant to Burma, Cuba, Vietnam, Syria, Iran, and Russia as well. Leaders of pro-democracy movements around the world are beginning to form strong relationships with the Falun Gong community because of what GIF is doing, and they will make their voices heard. I am certain they will make their voices heard.

ET: You might know about an investigative report written by Canadian dignitaries about organ harvesting from live Falun Gong practitioners which was put on the Russia’s “black list” over a year ago, along with the teachings of Falun Gong’s founder, Mr. Li. What do you think about it?

MH: That’s what dictatorships always do. The Chinese government spares no effort at trying to stop governments from being friendly to Falun Gong practitioners. So the fact that the Russian government puts the Canadian report on its black list is no surprise. The Chinese ambassador to Russia was probably just making demands and the Russians did it; that’s like one plus one equals two.

But that tells you something about the walls of 21st century. What it tells you is that the walls of the 20th century were made of barbed wire and bricks. The walls of the 21st century are electronic. The Internet and the information revolution is one of the great liberalizing and democratizing developments in the history of the world. All of the dictatorships know this and they are all building their firewalls and spending money.

ET: We know that totalitarian governments spend billions of dollars on firewalls for censorship purposes ….

MH: Hu Jintao once said: “The stability of the socialist state is at stake unless we purify the Internet.” And here are the GIF geniuses who are tearing down the firewalls. We need to get adequate support from the world for GIF, so that not only 1.5 million people a day can have complete Internet freedom, but 100 million people a day can use the gift of the GIF software to escape the censorship, blacklists, and firewalls of the world’s dictatorships.

We should not care now about the Russian blacklist, because the Russian government can no more stop the information from coming into Russia than they can stop the rain from coming down.  Russia’s actions confirm how passionate the Chinese regime is to caricature the Falun Gong and its practitioners.

This proves yet again and again that what the GIF people are doing is reshaping the history of the world in the 21st century. We need to tear down the firewalls and end once and forever the ability of dictatorships to monitor, censor the news, and isolate their own people. And that is what the GIF programs are doing.