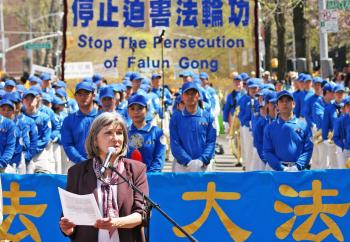 FLUSHING, NEW YORK—This April 25th, Flushing saw a scene different from a decade ago in Beijing, yet carrying the same message: Stop the persecution of Falun Gong in China.

Enjoying freedom of expression, belief, and assembly in New York, in stark contrast to China, Falun Gong practitioners held a march and rally closely linked to events ten years ago—events which marked the beginning of a persecution many are calling genocide.

On April 25, 1999, more than 10,000 practitioners gathered at the appeals office in Beijing near the regime's Zhongnanhai compound. They were appealing for the right to practice Falun Gong without persecution, after 40 practitioners had been beaten and arrested in nearby Tianjin. It was the largest peaceful appeal by any group under the rule of the Chinese Communist Party, and the party leaders soon afterwards used the day as a pretext to launch a brutal persecution. Falun Gong is a meditation practice based on the teachings of truthfulness, compassion, and tolerance.

Ten years later, on Flushing’s Main Street, drummers in golden yellow marched with red tassels flying in time to the beat. Knights and fairies paraded regally. Solemn practitioners, dressed in white mourning clothes, carried wreaths of those who have been tortured to death. A brass band led the procession.

Sun Yanjun, a former professor at Jilin University in China, spoke at the rally following the march.

“I believe the persecution of Falun Gong is truly a conspiracy of a few high-ranking officials in CCP,” he said. “This persecution has been so evil and so brutal, but it has still failed to stop Falun Gong.”

Assemblyman Fitzpatrick said it was important to stand together when there is persecution in a foreign land, like China. “Falun Gong practitioners are our friends and neighbors. This is wrong, we stand with you.”

City Councilmember Tony Avella said he was proud to be at the rally. “You have my support. I stand in solidarity with Falun Gong practitioners.”

Referring to recent attacks on Falun Gong practitioners by Chinese communist sympathizers in Flushing, Avella supported a full investigation into the persecution of Falun Gong on American soil.

“Under no circumstances, whether in China or here in Flushing, should Falun Gong be persecuted,” he said. “If we find diplomats who are involved in persecution they should be expelled from our country.”

Attacks on Falun Gong have taken place since May of last year and some perpetrators have been arrested and charged. New York's Chinese consul-general Peng Keyu was recorded in a phone call last year, saying he was organizing and supporting the pro-communist groups to attack Falun Gong. The Department of Justice is currently investigating the case.

“It's absolutely disgraceful that here, in the U.S.A., Falun Gong practitioners are persecuted,” Avella said.

“You have the right to practice your spirituality,” she encouraged local Falun Gong practitioners at the rally. “And if there are any qualms about that—come to me … There will be justice for you when they try to persecute you in my district.”

Flores-Vasquez said she was proud of other elected officials, such as Congresswoman Carolyn B. Maloney, who sent messages of support.

“Today is a very good example that the police here also support human rights. This is about democracy.”

“It is truly outrageous that people should suffer persecution because of their beliefs,” she said in a message. “I sincerely hope that very soon your brothers and sisters in China will be able to enjoy the freedom to practice their beliefs, as is their right.”

“Today I want to join with you on the 10th anniversary of the systematic persecution of Falun Gong,” he said from the U.K.

McMillan-Scott has campaigned against the persecution of Falun Gong for three years and said, “This goes beyond man's inhumanity to man—it amounts to genocide.”

In a letter to U.N. Secretary-General Ban Ki-moon, dated 25 April 2009, McMillan-Scott said: “They [Falun Gong] have been persecuted… by the most paranoid, brutal and arbitrary regime in world history.”

Falun Gong spokesperson, Erping Zhang, said, “Throughout the whole persecution Falun Gong practitioners have always been peaceful—never violent,” he said. “We believe those responsible for persecution, for torture, will be brought to justice.”

Tim McDevitt and Joshua Philipp contributed to this report.