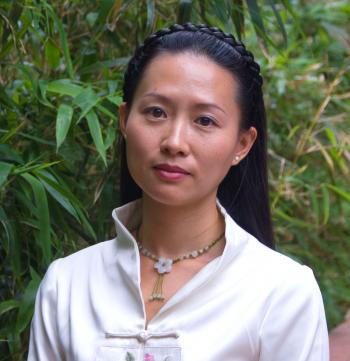 Ms. Chen demonstrates how she was bound by female drug addicts in the labor camp where she was detained. The inmates beat her continuously for 14 hours while her legs and arms were tied up. (Charlotte Cuthbertson/The Epoch Times)
China

Forty detainees were forced to face the wall in the small and dingy cell as Crystal Chen was tortured. The police wanted to be sure that they heard the torture but did not see it. Their last victim had passed out, so Chen was a fresh challenge.

They threw her on the floor and four large males from China’s notorious 610 Office held her limbs down.

A water bottle was cut in half to be used as a funnel. A one-pound bag of salt was poured inside the bottle, a token bit of water added. Chen’s eyes were covered with a dirty towel. Guards shoved the opening of the bottle against Chen’s teeth and tried to pry her mouth open with a used toothbrush. She was obstinate—she knew the salt could kill her.

The female guard got the men to use a stick to scratch her foot, causing her to gasp.

“The salt went everywhere into my mouth and up my nose,” Crystal said in an interview in New York, after arriving in the United States May 13.

“It was hot, hot pain in my throat and nose. I couldn’t breathe; I thought I was going to die.”

Chen said she was struggling hard against the pain when she decided to relax and pray for the strength to endure. Almost immediately the chief guard ordered the torture to stop. One of the guards holding her down fell over.

“I vomited salt and blood for the following days and could not eat,” Chen said. “My gums were full of blood, I could hardly talk. They still handcuffed me.”

Room 212 in the Tianhe District Detention Center, Guangzhou City, China, was the scene of Chen’s first experience of torture. She was 27 years old at the time and had been practicing Falun Gong, an ancient spiritual practice, for three years. Chen was arrested just days before Christmas in 1999, after handing in a petition letter at the Central Petition Bureau, expressing her wish for the persecution of Falun Gong to stop.

Six days after her release from the detention center, a male practitioner, Gao Xianmin, died after being subjected to the same high-density salt torture.

Chen was soon fired from her job for reasons of “violating labor discipline.” She was one of the hundreds of thousands of Falun Gong practitioners to have been harassed at work and lose their jobs during the persecution in China.

Chen’s next arrest, in 2000, saw her in a detention center in Hebei Province.

“They handcuffed me to a radiator pipe for three days and forced me to tell my name,” she said. “I saw many fellow practitioners from all over China being tortured by sticks, hanging up, and electric baton shocks; their skin was covered with black bruises and burns.”

Chatou Forced Labor Camp used slightly different torture techniques. In 2000, Chen was sentenced to two years there, without a trial.

One morning at about 9 a.m. at Chatou, Chen was led to a dark room with all the windows covered by newspapers.

“The guards called some women drug addicts and tied my hands and legs together: they forced me to sit in the double lotus position and tied my legs in that position; and they tied my hands on my back and put me in the middle of the room; they continuously beat and insult me. I was tied up for 14 hours, no bathroom breaks, no sleep. After that my legs lost sensation for a long time.”

“Immediately after this torture, I was put to another position called ‘cross stretch stand.’ They stretched my hands apart with handcuffs to the limit, forcing me to stand up for three days without a break.”

In 2004, Chen was back in the Tianhe District Detention Center, this time for two and a half years. There, she became the first victim to suffer force-feeding by getting a rubber hose inserted into her stomach through her nostril.

“The prison doctors had no knowledge of nostril feeding,” said Chen. “They forced me into a chair, my hands were chained and head pushed backward. After they inserted a rubber hose into my stomach through my nostril, the prison doctors even pulled the tube back and forth several times to cause more pain.”

Chen said they left the tube inserted for several days, with the end taped to the side of her head and left in the open air. She was afraid to pull it out because she knew the pain of it being re-inserted.

“I did not compromise after several days of such torture,” she said. “The desperate police sent me to a Guangzhou Post Hospital to receive an infusion. A police officer told a prison guard Zheng, “We should send her to Kanghua Hospital to be raped.”

Chen avoided being raped, although she was sexually harassed.

Escaping to Thailand and finally being accepted into the United States as a United Nations refugee has been a long journey for Chen. Now as she walks in freedom, she is committed to ending the persecution in China.

On July 20 this year, it will have been 10 years since the communist regime launched a persecution campaign against Falun Gong.