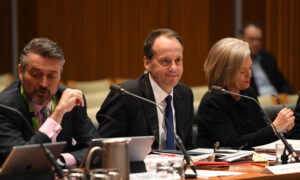 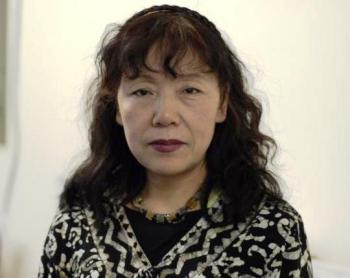 Yijie Zhang escaped from China in September 2007 after facing years of persecution for her beliefs. In 2008 she received U.N. refugee status and now lives in Queens, New York (Joshua Philipp/The Epoch Times)
International

By Joshua Philipp
Print
NEW YORK—Yijie Zhang is a soft-spoken woman whose kindness can be heard behind every word. Her clothes are colorful with a touch of class, decorated with Chinese patterns, yet she keeps a modest air about her. At first glance, nobody could decipher the unimaginable horrors she had endured.

Zhang was there from the beginning—July 20, 1999—the day the Chinese Communist Party (CCP) launched its persecution against the meditation practice of Falun Gong. In the years that followed she was sent to forced labor camps, brainwashing facilities, and has been tortured in ways that few could have lived on to recount.

She escaped from China in 2006 and made her way across the border to Thailand. After being granted refugee status a year later, Zhang, now over 50 years old, lives in Queens, New York.

She shared her story with The Epoch Times, telling of the terrors behind the the facade of the CCP.

“My reason of coming to the United States was to expose [its] evilness to the international community,” Zhang said.

Before the CCP's crackdown on Falun Gong (also called Falun Dafa), it was the most popular qigong practice in China, known for its health benefits and traditional teachings. Zhang began practicing in 1994 at a time when “the whole society was kind to Falun Gong practitioners. They acknowledged it as a practice with high virtue,” she said.

Zhang was married in Beijing and had two children—a son and a daughter. She was the division chief at the Chinese General Office of the Ministry of Commerce.

Working in a high-pressure environment, Zhang said Falun Gong helped to changed her life. “When I put aside my selfishness and started treating others well I found life to be very rewarding,” she said. “When you treat others so sincerely, so kindly, it's real happiness.”

Zhang was on a 20-day trip to Germany when things went awry. She came back to Beijing on April 25—a day that she would never forget.

When she arrived home in the mid-afternoon her husband told her that he had received a phone call. All he was told was to “go to Zhongnanhai quickly, grab all the Falun Gong practitioners that belong to your unit and get them home,” Ms. Zhang said.

“I knew something had happened,” she said. Without second thought, she grabbed her bike and headed to Zhongnanhai as fast she could.

The ride there was eerie. There were no cars on the streets. Sidewalks were filled with police.

When she arrived at Zhongnanhai, she found thousands of Falun Gong practitioners there, appealing to the government's office. Several of them were sitting in meditation, others were standing quietly. Walking among the group were plain-clothed police and Western reporters who were questioning whoever they could.

Still unsure of what had happened, Zhang's first thought was to find someone she knew, yet as she began shuffling through the crowd she soon to realized something wasn't quite right.

“When I started to observe I could see that police had surrounded the entire group of Falun Gong practitioners. The whole road was blocked. I realized they only let me in because they probably thought I was one of them,” Ms. Zhang said.

After asking around, she soon found out what had taken place. A man claiming to be a scientist, Zou Xiu, wrote a magazine article featuring false information about Falun Gong (Zou Xiu is a relative of Luo Gan, who would later be a main figure in the crackdown of Falun Gong). Following the publishing of the letter, a group of 45 Falun Gong practitioners went to the magazine's office and “told them the portrayal was far from the facts,” Ms. Zhang said.

The police at the station told people that they'd need permission of “higher ups” to have the 45 practitioners released. They were told to go to the central government if they wanted to appeal for their release.

At the time, an estimated 70 to 100 million people practiced Falun Gong in China. More than 10,000 showed up to appeal at the government office in Zhongnanhai—the event Zhang was witnessing.

At around 9 p.m Chinese Premier Zhu Rongji came and met with the Falun Gong practitioners. A resolution was reached and everyone headed home. They dispersed quickly and cleaned the area of trash as they left.

It was the largest peaceful appeal ever under the CCP's rule.

However, the “April 25 Incident” was soon used by the former leader of the CCP, Jiang Zemin as an excuse to launch a nationwide persecution against Falun Gong. He claimed that Falun Gong practitioners had besieged a government compound—propaganda that is often repeated by mainstream media today.

“It was like the first bullet in the persecution of Falun Gong,” Ms. Zhang said.

On July 20, 1999 the CCP unleashed a full fledged crackdown which lasts to this day. Jiang Zemin gave the orders to “destroy their reputations, bankrupt them financially, and destroy them physically.”

Zhang was among the first Falun Gong practitioners to be arrested. She was taken from her workplace to a women's labor camp in a remote suburb of Beijing.

“They formed a brainwashing class specially for the Falun Gong practitioners who worked at the central government,” she said.

It was a place of mental torture. She would be forced to watch clips of CCP propaganda, and at least one person would be by her side 24 hours a day, in an effort to persuade her in renouncing her faith.

“A few people would talk to you constantly, trying to inject their messages into your mind. You don't have a moment to breathe,” Zhang recalled. “From the early morning until midnight they tried to replace your thoughts with theirs. They also tried to make you sign documents to give up your beliefs. It was very, very intense.”

“I felt the methods they used to force people to change their thoughts were vile. So I started a hunger strike in protest of their persecution of people's spirit and faith,” she said.

The brainwashing facility has classes lasting 15 days. If someone doesn't give in “they'd never release you.”

“They found that I'd rather die than give in, so they released me,” Zhang said.

Knowing she had been followed, she didn't go home after her release. Instead, she left for Guangzhou province. She spent as much time as she could writing articles to let the world know what was taking place.

Agents were dispatched from Beijing to find her.

In 2001, Guangzhou police arrested her and sent her back to Beijing, where she was again pressured to give up her faith. After she refused, they sent her to a labor camp.

Zhang said she still finds the persecution hard to believe. “I couldn't believe they would try to control my thoughts. If you don't follow their ideology they persecute you,” she said.

For more than two years Zhang was tortured daily and the guards at the labor camp assigned other prisoners—mostly drug addicts, thieves, and prostitutes—to assist them in torturing her. When she wasn't being tortured she was forced to make goods to export, including slippers, gloves, and mats.

They didn't allow her to speak during her entire detention. They forced her husband to divorce her and would beat her to near death, inject her with unknown drugs, and pour cold water over her in the winter. Sometimes they would have two people stand on her knees while another person pressed forcefully on her back. Countless other methods were used.

All the while they kept a pen and paper on the floor nearby. They tempted her—if she signed away her faith they'd release her immediately.

“They try to torture you to a point where you can't take it anymore and they can make you do what they want,” she said.

The torture method that stood out most vividly for Zhang was extreme sleep deprivation. At one point they didn't let her sleep for 42 days and nights while they tortured her. “I was forced to stand and they'd hit me in the head with a stick every time I'd start to doze off,” she said.

Later, after 30 days without sleep “I was almost at my limit. I felt I was near death. I fell on the ground and the police were saying 'get up! get up!'” she said. “Their voices seemed so remote. I felt at that moment I was too tired and too sleepy. The police came with a big bucket of cold water and poured it over me.”

On the 42nd day they tried one last time to break her will. She was taken out into the cold, where guards tried to force her to run. “I didn't have the strength to run at all,” Zhang recalled. “They hit me on the temple and I felt the bone break. I fell to the cement and the back of my head slammed against it. I lost consciousness.”

“I thought that was the end of my life, yet I woke up right away,” she said. “On the 42nd day they realized I would rather die. I would never give up my practice.”

Towards the end of her stay she was sent to an “intensive training” area. Four people were assigned to watch her at every moment and they would try and persuade her endlessly to renounce her beliefs. While they did this they forced her to watch CCP propaganda videos.

Some of the people assigned to try and brainwash her were “transformed” Falun Gong practitioners who gave up their beliefs under pressure. They called them “Judas'.”

“They're not just watching your body but also your thoughts,” Ms. Zhang said. “If they thought your mind was taking a break or if you were thinking, they would kick you.”

Seeing that her will couldn't be broken, the prison camp released her in 2003.

Following her release, she was monitored constantly both at home and at work. This lasted until 2007, when she decided to escape from China.

In September 2007 Zhang made a difficult journey across the border into Thailand where she was granted political asylum.

A year later in October, 2008 she received United Nations refugee status and was able to come to the United States. Zhang's first stop was in Seattle and she later came to New York where she now lives in Queens.

Today, Zhang dedicates as much time as she can spare to exposing the CCP's persecution in China. She added that because of her high social status the police didn't use the full array of torture methods often used on other Falun Gong practitioners—such as electric shocks and sexual abuse.