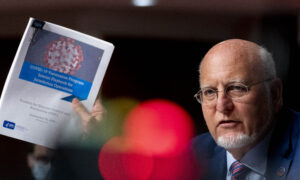 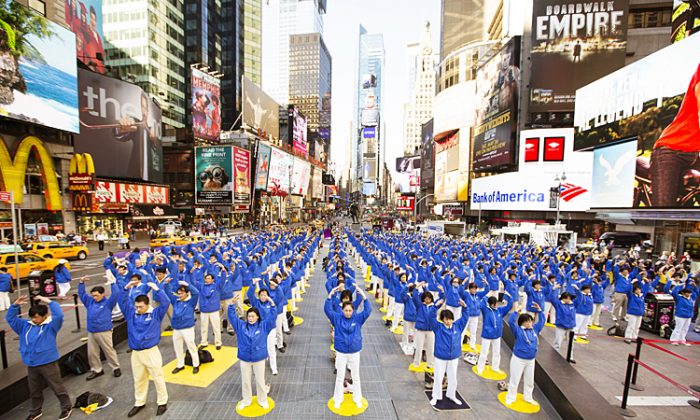 NEW YORK—Something unique happened on Times Square on Saturday. From the morning until late afternoon, it became calm. Beneath the flashing billboards and amidst the bustling of tourists, hundreds of people sat in meditation while soft Chinese music played above low voices.

The event was one of several throughout the city marking the 20th year since Falun Gong was introduced to the public in China. Meditation lasted through the easy afternoon, and turned to music and Chinese dance as the day drew on.

And although this was a celebration, people standing on corners with fliers for passersby also had a story they hoped to tell.

“This is a celebration of 20 years of traditional culture, spread to the world,” Margareta Nord, who came from Sweden to join the events. “Cultivation is about becoming a better person and leaving the bad things behind.”

By cultivation, Ms. Nord was referring to the Chinese tradition of self-cultivation based around improving a person’s character by holding to higher standards—a tradition being revived by Falun Gong. The practice, also known as Falun Dafa was brought to the public by Li Hongzhi in 1992, and spread across China where it won many awards for its health benefits.

Mr. Li was named the “Most Acclaimed Qigong Master” at the Beijing Oriental Health Expo in 1993, where Falun Gong was awarded the expo’s highest honors—the “Advancing the Frontiers of Science Award” and the “Special Gold Award.”

Ms. Nord said she first came across Falun Gong in 1995, when she heard Mr. Li speak at a small town outside of Gothenburg. “At that time I could feel it was something strong and special,” she said.

Bystanders at the events in Time Square shared a similar sentiment. Sakthi Vel, visiting NYC from Washington, said he found it interesting to find such a peaceful scene in Times Square. He had the impression that “it’s good for the health.”

Hedwidge, an 82-year-old lady from Milford Connecticut who preferred only using her given name, stood watching the activities for an hour with her two daughters. “You can feel the qi going through them,” she said. “We were walking around looking to find a place to eat and then we found food for the soul.”

People stood and took photographs while practitioners of Falun Gong demonstrated the exercises and meditation. The dances and songs that came later also drew their own crowd—many of whom sat on the elevated seats near Broadway, 7th Avenue, and 46th to watch the show.

Yemina Khan, a daycare teacher, felt like she was in ancient China during the Han Couture fashion show. “Their style is different from other styles—elegant,” she said. “I thoroughly enjoyed it.”

Falun Gong has become a symbol of solidarity. The Chinese regime launched a brutal persecution against the practice in 1999, soon after a state poll found between 70 and 100 million people were practicing across China. Then Chinese leader, Jiang Zemin, published orders for the police to “ruin their reputations, bankrupt them financially, destroy them physically.”

Although the persecution was intended to destroy Falun Gong within three months, practitioners have peacefully resisted for more than 12 years. Even when given the choice of death by torture or surrendering their beliefs, they’ve held their faith.

“The Falun Gong practitioners are just the latest in a long line of people being sacrificed to ensure the elite stay in power,” said Mr. Zelig, 53, who came from Queens to show his support for Falun Gong.

Levi Browde, executive director of the Falun Dafa Information Center, helped organize Saturday’s activities. The center records cases of practitioners tortured and killed at the hands of the Chinese regime.

“There are a lot of misunderstandings about what Falun Gong is,” “Falun Gong is a lot more relevant to people around the world than they may think.”

When Falun Gong made headlines around the world 10 years ago, “nobody knew what it was—including China experts,” said Levi Browde, executive director of the Falun Dafa Information Center. The Chinese regime’s propaganda became the only voice heard.

“So there has been a confused picture,” Mr. Browde said. “Falun Gong is something that has very ancient roots—very much a heartland Chinese practice … It represents the very best of traditional Chinese culture.”

“Many people inside China who understand Falun Gong, they think it’s the best and only hope for the country. Because these are the people bringing stability to their communities and their families—how they conduct themselves [including while doing] business,” he said.

“I really think the main point of today is to understand the nature of Falun Dafa, and what a wholesome and holistically uplifting force it is in people’s lives,” he said. “Falun Gong is a force for that kind of good.”

With reporting by Andrea Hayley.