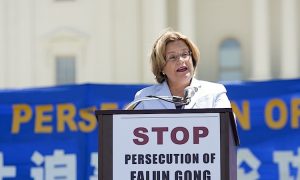 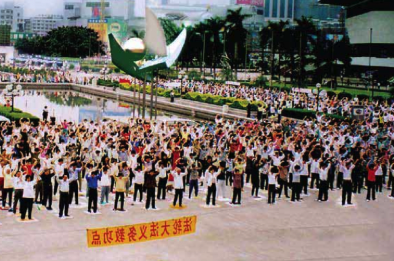 Falun Gong adherents practice the discipline's meditative exercises together in Beijing, China, before the persecution began on July 20, 1999. (Minghui.org)
China

Falun Gong Before the Persecution

Throughout the 1990s, before they were cast as Public Enemy No. 1 in Chinese regime propaganda, Falun Gong practitioners across China had a quiet joy about them. They had discovered the key to health and meaning in their lives and were eager to explore and share it.

They got up in the morning to do their “qigong” exercises—slow-motion movements followed often by a meditation, seated with legs in the lotus position—studied the Falun Gong texts together, and generally minded their own business.

“In China back then, you could go to any park or public space and you’d see people practicing Falun Gong. It was very harmonious,” she said. “No one would come and ask what your name is. After finishing practicing the exercises, you just go home.”

Zhang, like many others, was drawn to Falun Gong because of what she said were the immense health benefits that it conferred.

“Before I practiced Falun Gong, I never knew what it was like to have no illness,” she said in a telephone interview from her home in the Washington area.

Zhang was born with a congenital heart defect and underwent open-heart surgery at 11 years old. “My body was always weak. If anyone around me was sick, I would get sick. I could never escape the flu,” she said.

After practicing Falun Gong, colleagues and students would ask: “Teacher Zhang, do you do sports?” She would respond, “’I meditate. I practice Falun Gong.’”

The story of Cui Zijing, formerly a scientist at Tsinghua University, one of the most prestigious in China, is similar: Suffering from severe myocarditis, a kind of inflammation of the heart, she could only walk up one flight of stairs before needing to take a breather. “Sometimes I would wake up at night with my heart palpitating so hard that I was scared of dying,” she said.

Cui now lives in Chicago and left China in 2006, seven years after the persecution against her faith began. Before July 20, 1999, however, Cui was an active and enthusiastic practitioner of Falun Gong.

While it was the health concerns that impelled her to begin practicing, she quickly found that Falun Gong contained something much deeper than that. “I realized that this is actually a cultivation practice,” she said. The term refers to mind-body exercises that have been passed down for millennia in China, usually involving a combination of meditation and moral discipline.

“I didn’t know what cultivation was. I had only heard about Taoists cultivating in the mountains from reading martial arts books. I didn’t understand it,” Cui said, “After practicing Falun Gong, I realized ‘Oh, we’re actually doing cultivation practice, cultivating according to the nature of the universe.’”

The principles espoused by Falun Gong—truthfulness, compassion, and forbearance—were particularly attractive, Cui said, because she felt it was obvious that they were simple and good.

John Meng, a practitioner of Falun Gong who now resides in Australia as a scholar, said the first time he saw practitioners, “They were doing the fifth exercise in a grove. I felt their hand signs were very beautiful.” The fifth exercise is a sitting meditation. “The cheerful mood of mine at that time is hard to describe with human words since I knew I had hope for life,” he wrote in an email.

After he began practicing Falun Gong, he said, “many things changed.” He began treating people kindly, stopped getting into conflicts with classmates, studied and worked harder, and “got to know many genuine friends who were also practitioners and who helped me a lot in improving my character.”

Meng continued: “Falun Gong was widely welcomed by people because of the good deeds practitioners did, and the wondrous healing and fitness effects. And it was right because of these factors, Falun Gong spread very fast and became very popular in China.”

All around them, Chinese people were seeing their family members and colleagues transformed by the spiritual practice, according to Yang Qing, who was an engineer in China, and after he retired ran a Falun Gong practice site near the south entrance of Tsinghua University.

Yang said that once he learned what Falun Gong was, he became very excited. “I had practiced other qigong, but they never talked about truthfulness, compassion, and forbearance. They didn’t talk about returning to one’s original self. We felt we had found the true cultivation way. I was excited from inside the heart: I found a righteous path of cultivation that I could walk to the end.”

So, he arrived to the practice site at 4 a.m. every morning and swept the ground and the nearby paths, then meditated for an hour before the 6 a.m. crowd arrived. He taught the practice to his son and wife, whose cancer, he says, subsequently went away.

Yang said that articles would appear with some regularity in the newspapers praising one or another good deed that someone had done—returning a large some of money they had found, or rushing an injured stranger to a hospital and ensuring their family had been called—which were inevitably linked to Falun Gong and its moral force.

“It grew very fast in China,” he said. The practice’s founder, Li Hongzhi, was invited to speak in the austere halls of the Chinese Public Security Bureau. The police, and the neighborhood block monitors in particular, all liked Falun Gong practitioners, Yang said, because they knew they would get no trouble from them.

All that changed on July 20 of 1999, when Jiang Zemin, the leader of the Chinese Communist Party, launched a persecution against the practice. The block monitors Yang spoke to implemented the edicts, but were unenthusiastic, Yang said. “Oh,” one of them sighed to him. “We know you’re good people.”