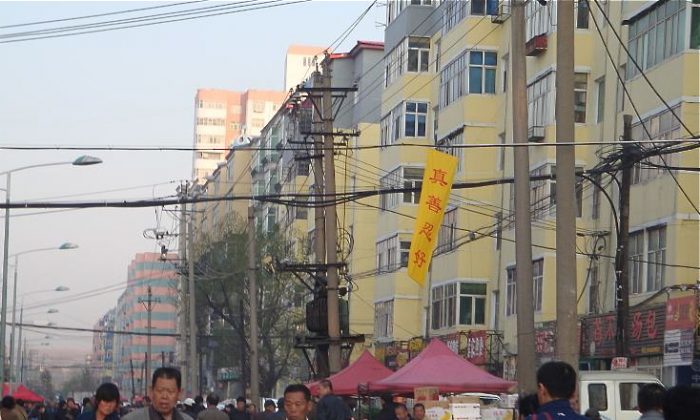 A poster saying, “Celebrating the 20th Anniversary of Imparting Falun Dafa to the World,” is shown pasted on a wall in Peking University. (Courtesy of Minghui.org)
China

In many areas of China, home-made banners displaying pro-Falun Gong sentiments were defiantly displayed over the weekend. The timing commemorates the 20th anniversary of the founding of the practice, according to the Minghui website, a news site where Falun Gong adherents share experiences and report on adherents who have been victims of persecution.

Practitioners of Falun Gong, otherwise known as Falun Dafa, have been persecuted by the Chinese regime since mid-1999, with thousands killed by torture, and millions held in labor camps and detention centers. Falun Dafa is a meditation practice based on the principles of truthfulness, compassion, and tolerance and has spread to over 100 countries.

A banner stating the “[Celebration of] May 13th—World Falun Dafa Day” was recently spotted by a local resident hanging near the Beijing-based Central Party School of the Communist Party of China, the website states.

Near the Summer Palace in Beijing, there were also a number of banners hung on trees and above streets, which proclaimed the “Celebration of the 20th Anniversary of Falun Dafa’s Introduction to the World,” “Falun Dafa is Good,” “The World Needs Falun Dafa,” and others. Smaller stickers were posted on numerous fences, poles, and bulletin boards near Beijing University, the website states.

An individual caught by police for putting up banners of this type may be subject to violent and extralegal treatment, including years of forced labor or coercive “thought reform” sessions. The protest method of clandestine banner placement evolved after Falun Gong practitioners who attempted to hold the banners in public places were repeatedly beaten and arrested by police.

A banner saying, “Stop the Persecution of Falun Gong, Bring Jiang, Luo, Liu, and Zhou to Trial,” is shown in a city in northeast China. (Courtesy of Minghui.org )

One banner that caught the attention of many passersby read: “Bring Jiang, Luo, Liu, and Zhou to Trial.” This refers to Jiang Zemin, the former head of the Chinese Communist Party who initiated the persecution of Falun Gong, and his primary collaborators, all former and current Politburo Standing Committee members—Luo Gan, Liu Qi, and Zhou Yongkang.

The turmoil plaguing the Chinese Communist Party since Feb. 6, when the former Chongqing police chief Wang Lijun fled to the U.S. Embassy in Chengdu seekin asylum, has been driven by the question of whether Jiang and his collaborators will be held accountable for the persecution of Falun Gong. The banner reflects the demand made by Falun Gong practitioners that those responsible should be tried.

Banners were also spotted in Heilongjiang Province’s Jixi City stating “Falun Dafa is Good” and “Truthfulness, Compassion, and Tolerance are Good,” referring to the main principles of the practice.