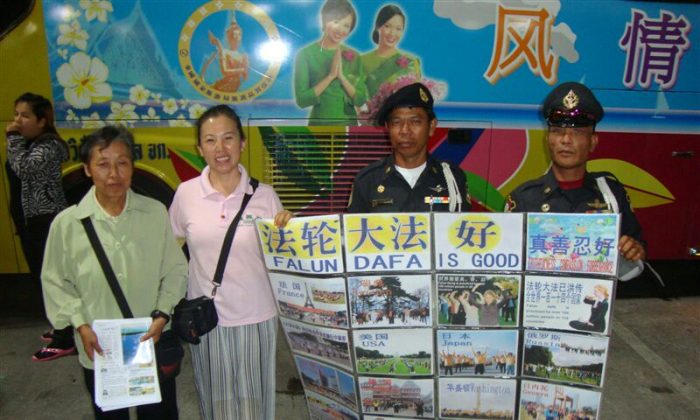 After 10 years of legal wrangling, the Supreme Administrative Court of Thailand on Aug. 5 declared that practitioners of Falun Gong, a Chinese spiritual practice, would be allowed to register a non-profit organization in their own name.

Much of the case was moved forward by a laconic dentist by the name of Paitoon Suriyawongpaisan, based in Bangkok. A Falun Gong practitioner, Paitoon eschewed lawyers (“lawyers are useless,” he said) and instead wrote a lengthy account of Falun Gong to the judges, appearing in court whenever requested, from 2005 until recently.

Formal registration for the Falun Gong practice had previously been blocked by lower level officials in Thailand, allegedly at the insistence of Chinese diplomatic officers. China is known to wield clout in Thailand, which has a large Chinese population. Thailand is also often one of the first stops for Falun Gong refugees fleeing China on a kind of underground railway that has been established to help them escape persecution. This means there is a sizable refugee and local population who practice the discipline.

Falun Gong was founded in China in 1992 and teaches a set of slow moving exercises and a moral system based on living by the values of truthfulness, compassion, and tolerance.

The decision on Aug. 5 said that “People naturally have the freedom to practice their faiths, and their actions are protected under the Constitution of the Kingdom of Thailand, unless those actions contradict with citizens’ duties or violate peace and order or the good morality of the people,” according to a translation of the verdict by Khaosod English, a Thai newspaper.

The Ministry of Interior had rejected the attempt to set up the organization, which is called the Society for Study of Falun Gong of Thailand, in 2005, citing potential damage to ties with China.

Falun Gong has been persecuted in China since 1999, after nearly a decade of being practiced freely during which time its popularity grew dramatically. Over the past 16 years, communist authorities have attempted to expand their persecution of the practice overseas, putting pressure on countries with relatively less robust institutions.

According to the Bangkok Post, the association could be registered because it sought merely to: “promote Qiqong exercise in the Falun Gong style and exchange news and information among practitioners and the general public that has no political or profit-making agenda.”

“The Local Administrative Department’s claim that the supporters of Falun Gong were outlawed in China and that allowing registration of the group would affect bilateral relations has nothing to do with this group of people who are registering an association in Thailand,” the statement said.

Thai Falun Gong coordinator Wan Chai said that “everyone is very happy about it,” in a telephone interview. He said that the difference it would make to actual Falun Gong activities in Thailand would not be terribly great, but that it was important to set the record straight on the status of legally registering the practice.

Paitoon said that the decision won’t have any impact on Thai-China relations; part of this he addressed in his long letter to the officials, citing the high number of tourists from China and trade figures.

He agreed with Wan Chai that the formal recognition would, ultimately, do little to change how Falun Gong practitioners associated with one another or the public in the future. The exercises and teachings of Falun Gong are available freely on the Internet, and the practice includes no formal organizational structure, membership, or dues.

So why the lawsuit? “In order to protect the rights of Thai people to establish the organisation,” Paitoon said. “And to safeguard the reputation of Falun Gong. To prove the Chinese Communist Party’s propaganda wrong.”