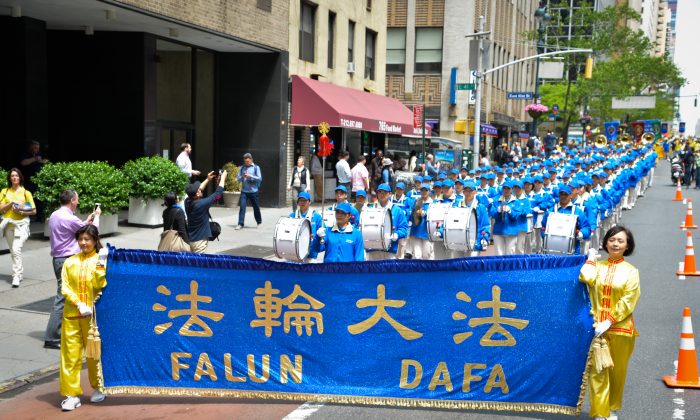 Practitioners of Falun Gong, participate in a parade in Manhattan on Wednesday. About 8,000 practitioners from around the world came to New York to celebrate World Falun Dafa Day to bring awareness to the spiritual practice and to the persecution of Falun Gong in China. (Dai Bing/Epoch Times)
Falun Gong

NEW YORK—Representatives from dozens of countries gathered on the plaza in front of United Nations on Wednesday, but not to vote or present reports. Theirs was a less official purpose—the annual Falun Dafa Day Parade.

Some 100 million people practice Falun Dafa in more than 100 countries. People from all over the world fly into New York once a year, turning the parade into a display of Falun Dafa’s openness and diversity.

Falun Dafa (also called Falun Gong) is a traditional Chinese meditation practice that includes tranquil exercises and an emphasis on living by the principles of truthfulness, compassion, and tolerance.

“As we see in the parade there are people from all walks of life, of all ethnicities almost,” Martins Rubenis, 35, from Latvia, said.

Rubenis is a professional luger. He won a bronze medal in the 2014 Sochi Winter Olympics.

“I believe everybody here today gathered with one purpose—to show the world the beauty of Falun Dafa and of the principles of truthfulness, compassion, and tolerance,” Rubenis said.

But displaying the beauty of Falun Dafa isn’t the sole purpose for the march. Falun Dafa practitioners in China have been persecuted by the Chinese Communist Party since 1999. Thousands have been killed, although the real death toll is likely much higher, according to the Falun Dafa Information Center.

Part of the Parade

The parade is divided into three sections. Rubenis, was part of the section, which supports the more than 164 million people who have withdrawn from the Chinese Communist Party.

The leading section of the parade depicts Falun Dafa’s spread throughout the world. That section is led by the 170-member Tianguo Marching Band, clad in sky-blue and white.

“When I wasn’t a part of the band, I heard the marching band play and it was amazing. I was in shock,” said Eduardo Acevedo, a Peruvian living in New York.

“We are showing the beauty of Dafa through the marching band,” Acevedo said.

Al Whitted, an owner of an outdoor adventure company from North Carolina, wore all white and walked with a solemn group of more than 100 others as part of a section of the parade that calls for end to the persecution of Falun Dafa practitioners in China.

“We want to stand up against injustice and persecution and make a public stance so that people in New York and from around the world can get a deeper understanding of the persecution of Falun Gong,” Whitted said.

For the past three years Whitted brought his sons to the parade. This year he brought his wife, Meagan Whitted, for a weeklong trip. Both held wreaths with black and white photos of Falun Dafa practitioners who have been persecuted to death by the Chinese Communist Party.

“We are holding the photo of the actual person who was persecuted to death in a labor camp, whether its Masanjia or another labor camp, and to celebrate their life, to stand up for their life, and to stand up against the persecution of Falun Gong,” Al Whitted said.

Liza Berkovich, 57, an Uzbekistan native, has played the Chinese drums in Falun Dafa parades for years.

“Today’s parade is unique because we have practitioners from all over the world here,” she said.

Berkovich has been practicing Falun Dafa since 1998. She spoke of having her illnesses healed when she first started to practice and how her entire family has benefited. Berkovich’s main purpose in coming to the parade is to call for an end to the persecution of Falun Dafa, but she said she also treasures the occasion to meet with fellow practitioners from all over the world.

“These encounters at the parade are so special to me,” Berkovich said. Even though all of the people here are from different countries, we follow the same principles: truthfulness, compassion, tolerance.”