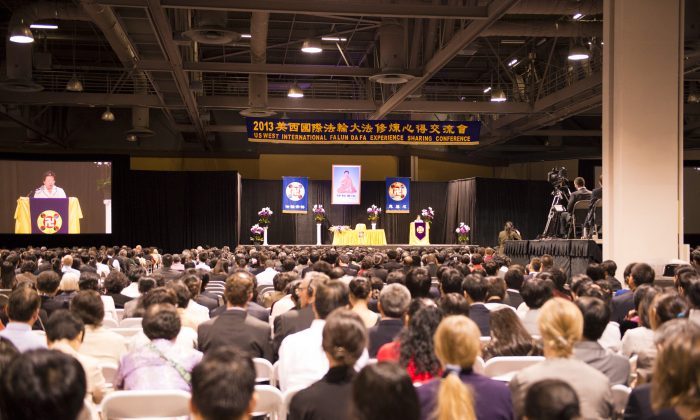 About 5,000 practitioners of Falun Dafa (or Falun Gong) from all over the world attend the U.S. Western International Falun Dafa Experience Sharing Conference on Oct. 19, 2013.
US

Approximately 5,000 practitioners of Falun Dafa (or Falun Gong) from all over the world attended. The announcement that the conference was about to begin shortly after 9:00 a.m. was made in Chinese, English, Vietnamese, Spanish, Korean, Russian, and Japanese.

After the two hosts recited a stirring poem in Chinese and English, the founder of Falun Dafa, Mr. Li Hongzhi, came on stage to enthusiastic applause. He gave a lecture to his students, encouraging them to be more diligent in cultivating their character.

Mr. Li compared the persecution of Falun Dafa practitioners in China to the persecution of the early Christians by the Roman Empire. Crimes against people of faith contributed to the Roman Empire’s ultimately vanishing, and today the Chinese Communist Party (CCP) is anxious that a similar fate could await it. Mr. Li noted the CCP’s systematic harvesting of organs from living Falun Dafa practitioners and selling them for profit as a most horrible crime that the planet has witnessed.

Mr. Li also talked about how practitioners should take the opportunity to let more people—especially Chinese tourists and travelers outside China—know about the CCP’s crimes against humanity.

Mr. Li left the stage to a standing ovation from the audience.

Most of the day was taken by practitioners reading papers describing their experiences in improving themselves according to the practice’s principles and helping people inside and outside China learn the truth of the CCP’s persecution.

Practitioners living in South Korea, Hong Kong, and the United States talked about how they volunteered to talk to Chinese tourists one by one and in small groups in tourist spots where the practitioners live. They shared how they maintained their composure and kindness as some people reacted in different ways, and eventually were able to help them understand the crimes of the CCP and the goodness of Falun Dafa.

More than a dozen practitioners shared their experiences on Saturday, enabling those in attendance to learn and grow themselves.

Falun Dafa is a traditional Chinese meditation and spiritual practice that teaches people to improve their character according to truthfulness, compassion, and tolerance. It has been persecuted by the CCP since 1999. The CCP’s persecution campaign has included lies and propaganda amplified by state-run media, while the extent and brutality of the persecution campaign has been obscured by censorship of domestic media and inducements for foreign media to not report the true situation.

In spite of the persecution and propaganda, Falun Dafa has flourished as more people take up the practice in over 100 nations.