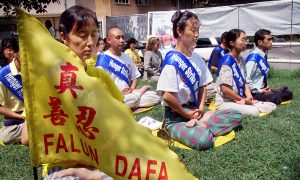 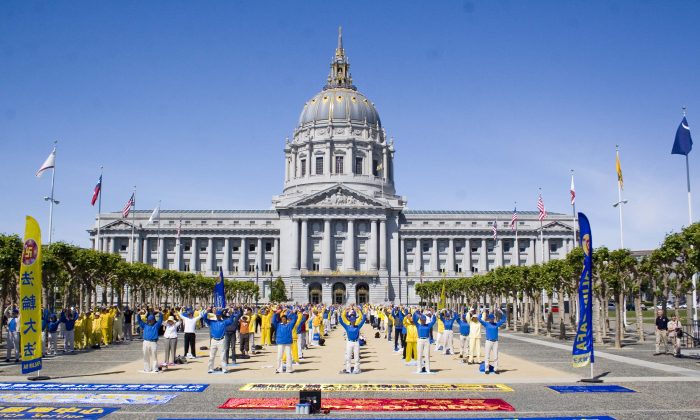 Falun Gong practitioners perform exercises in front of City Hall in celebration of World Falun Dafa Day in San Francisco, Calif., on May 11, 2013. The traditional Chinese spiritual practice was first introduced to the public 21 years ago and has spread to more than 100 countries. (Gary Wang/The Epoch Times)
Northern California

SAN FRANCISCO—Sylvia Scarpa and Sriram Mahadevan come from very different backgrounds, but this past Saturday found them both celebrating something that gives each of their lives meaning and freedom.

One morning, Sylvia Scarpa turned on the radio—and her life took a sudden turn.

At that time, Ms. Scarpa was very dissatisfied with life. She did not see much meaning in anything she did. The mental pressure to find answers to the questions she had been seeking all her life became unbearable.

The radio program was reporting on a spiritual practice she had never heard of. She picked up a few words and suddenly it clicked; something “ignited a light in my heart and brought me back to life.”

This was the first time she had heard about Falun Gong, also called Falun Dafa, a traditional Chinese practice with followers in more than 100 countries.

Ms. Scarpa immediately went to the website to find out more. Soon she bought the main text of Falun Gong, Zhuan Falun, and sought out local practitioners to learn the set of five meditative Falun Gong exercises.

Regular practice as well as study of the teachings are at the foundation of the practice, according to Falun Gong’s official website, FalunDafa.org.

On Saturday May 11, six years later, Ms. Scarpa attended World Falun Dafa Day in San Francisco, celebrating the founding of Falun Gong 21 years ago on May 13. On that day, in a small school building in northeastern China, Falun Gong was brought to the public and soon spread all across China and the world.

Together with hundreds of fellow practitioners from the Bay Area, she joined in the traditional parade that is held in many cities around the world. With elements such as a marching band, traditional Chinese dance pieces, and demonstrations of the exercises, practitioners strive each year to show the world the beauty of the practice.

Other practitioners carried banners to raise awareness of the persecution, which is ongoing in China.

Due to the immense popularity of the practice in all sections of society, with more Falun Gong practitioners than members of the Chinese Communist Party, the leadership grew anxious and in 1999 began a harsh and comprehensive persecution. According to the Falun Dafa Information Center, it is estimated that millions of practitioners have been held in labor camps where they endure torture and are used as slave labor.

Ms. Scarpa, who works as a personal assistant and language teacher, said Falun Gong not only gave her a sense of meaning, but it also benefitted her in other profound ways.

In conflict situations at work she used to react impulsively. But now she can simply “just give it up.” While she feels less affected in social situations and everyday life concerns, she has not become indifferent to others. On the contrary, the practice of compassion means that her “heart widens and widens and widens,” she said.

She also stopped thinking about unnecessary things. “I feel very free,” she said.

Sriram Mahadevan also attended Saturday’s parade. For Mr. Mahadevan it was mainly his scientific interest that attracted him to Falun Gong. When studying engineering at college in India, a friend who had stumbled onto Falun Gong through the Internet told him about it.

Falun Gong’s teachings answered for him many questions about “how the world works.”

Mr. Mahadevan, who works as a web developer at a startup company in San Francisco, also felt strongly attracted to the core principles.

“The teachings of Falun Dafa—truthfulness, compassion, and tolerance—really make sense. We have so many problems now across the world. … With a little bit of compassion, the world will be a completely different place,” he said.

He observed many changes within himself in the more than six years of his practice. Significantly, Mr. Mahadevan said he never really gets sick anymore except for minor colds. In almost seven years he has not needed to see a doctor at all.

Mr. Mahadevan’s relationships also took a turn for the better. He often used to have arguments with his father and sister. The practice seems to have “completely harmonized” his relationships with his family and other people, he said.

He was also quite reserved and kept to himself before practicing Falun Dafa. The teachings helped Mr. Mahadevan realize that anxiety is something he creates himself, in his mind; Falun Gong enables him to simply put it aside. “My mind is quite free. I am not worried or anxious anymore,” he said.

In college, he would not dare to speak publicly. But as new practitioners, he and his friend volunteered to travel to schools and share about the practice. One day, he demonstrated the exercises in front of thousands. “That’s a huge change,” he said.

Mr. Mahadevan hopes that more people are able to learn about Falun Gong and its benefit as he did. “The principles of Falun Gong—truthfulness, compassion, and tolerance—are applicable to anyone,” he said. Falun Gong “changed my life completely for the good.”