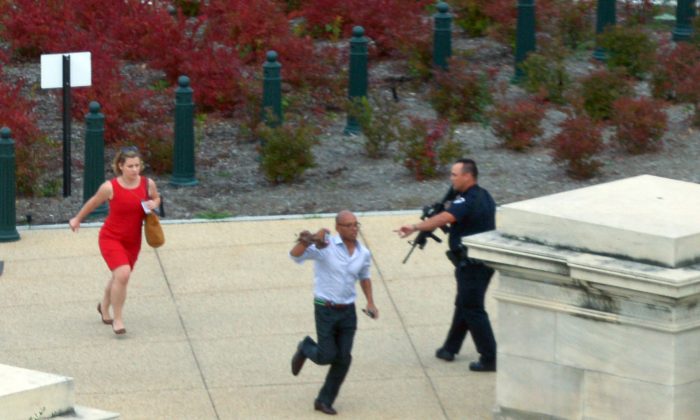 The situation in Washington D.C. on Thursday may have been a false flag, according to Alex Jones. Here, people run for cover as police converge to the site of a reported shooting October 3, 2013 on Capitol Hill in Washington, DC. (Mandel Ngan/AFP/Getty Images)
US

The situation in question had a suspect try to ram a barricade at the White House before police and Secret Service agents chased her to the Capitol Hill area. Later, the woman apparently hit police car before officers shot at her vehicle.

Jones said on his radio show, broadcast on his website Infowars, that there is information coming in about the situation being staged.

“Shots fired, U.S. Capitol,” he said. “They’re pulling a big distraction on us.”

Jones said he cancelled his scheduled guest so he could take everyone’s calls.

“Look for them to stage a bunch of stuff,” he said. “Pieczenik, who’s really got his ear to the ground, he says the Navy Yard was a staged event, and he has sources. So, look for more of that to happen very very soon to change the subject because everything the globalists do is falling apart right now.”

There are several interesting aspects to the situation, such as WUSA, a DC broadcaster, was reporting that both a man and a woman were in the car. Later, it removed the man from its reports.

Also, the first footage that emerged from the scene came from middle eastern broadcaster Alhurra TV.