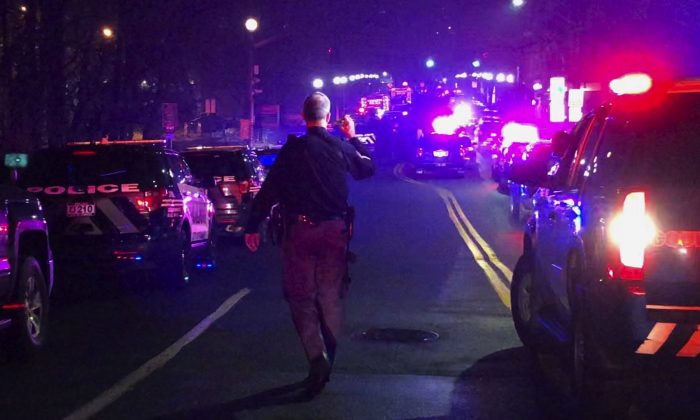 One of the first responders walk near New York-Presbyterian/Lawrence Hospital in Bronxville, N.Y. on March 10, 2019. (Luke Sheridan/AP Photo)
NY News

BRONXVILLE, N.Y.—Police rushed to a suburban hospital late on March 10 after two patients reported seeing a man with a shotgun. After hours of searching and reviewing security camera footage, officials concluded it was a false alarm.

“There are no victims and at this point, we don’t believe there was a suspect in the hospital who was armed,” said Bronxville Police Chief Christopher Satriale.

The incident at NewYork-Presbyterian Lawrence Hospital in Westchester County sparked a massive police response, including SWAT teams, after two patients in the same room reported the armed man to nurses on the sixth floor.

#breaking: PER Westchester County PD: Police are still searching the hospital for a possible shooter. No shots were fired and no injuries. Still a very heavy police presence on scene. @cbsnewspath @CBSNews @CBSNews pic.twitter.com/P94PxJQmvp

The hospital was then locked down as the building was searched room to room.

Hours later, security camera footage didn’t appear to show any individual armed with a long gun or handgun in the area outside the patients’ room, Satriale said.

“We have spent the last several hours reviewing video tape from the hospital, every floor that was reported to be trespassed upon, and no video has confirmed that there was anyone within the hospital armed with a rifle, shotgun or handgun,” CBS New York quoted a law enforcement official.

Satriale was asked if the patients might have made up the report maliciously. He said no and called them “credible witnesses” who thought the information they were providing was accurate.

#breaking: #SWAT and lots of #Police on scene after reports of some kind of situation inside NY Presbyterian Lawrence Hospital. Unclear if anyone has been hurt. @CBSNewYork @CBSNews @cbsnewspath pic.twitter.com/trUpI9hcug

“They might just be wrong in what they thought they observed,” he said.

No patients were evacuated from the hospital, which had earlier urged people not to come to the hospital unless it was an emergency.

Prior to the search operations by law enforcement, the scene at the Bronxville hospital was chaotic, according to CBS. Media videos from outside the hospital showed numerous law enforcement vehicles parked outside, flashing their lights.

“I heard all the commotion, all the sirens and I came out of my apartment just to see what was going on and this is what laid out,” Matthew DiCicco, a local resident told CBS New York.

“It’s a very scary situation and it hits home for us ’cause being nurses, your first logic is to take care of people and patients and when they’re in their most vulnerable time of need which is when they’re sick and this hinders patient’s care,” another local resident, Antonette Toscano, told CBS New York.

The hospital had earlier posted to Twitter about the situation and thanked everyone for their thoughts. The tweet, which was later deleted, said: “We are continuing to gather details about tonight’s developments and will provide an update when we can. Please do not come to the hospital tonight unless it is an emergency. Thank you for your thoughts and prayers for our staff, patients and law enforcement.— NYP/Lawrence (@NYPLawrence) March 11, 2019″

In 2017, a doctor opened fire inside a Bronx hospital, killing a doctor and hurting six others before killing himself at the scene. The man, who had been a doctor at Bronx Lebanon Hospital, Henry Bello, had been forced to resign two years earlier amid a sexual harassment claim.

Various police agencies stage around a New York Presbyterian Lawrence Hospital as a search for an active shooter in the building. #lohud @lohud pic.twitter.com/Gwx6jOYEFW