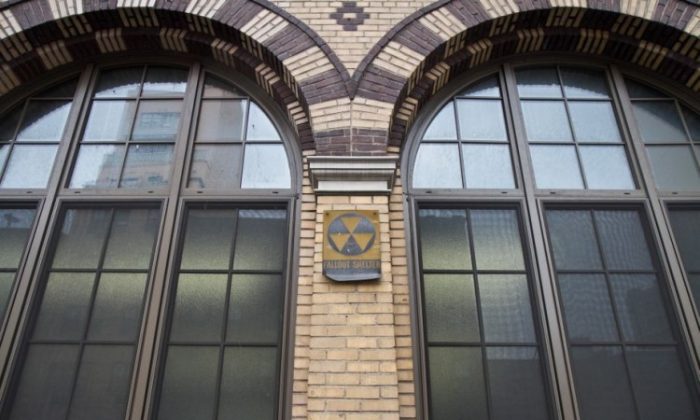 A sign for a fallout shelter is on a building in the lower East-side of Manhattan on May 23. (Benjamin Chasteen/The Epoch Times)
US

NEW YORK—Walking around Manhattan with one’s gaze slightly lifted, it is easy to spot on older buildings small signs with yellow-black trefoil labeled “Fallout Shelter.” They are reminders of a time when the country was steeped in the fear of a nuclear war and its catastrophic consequences.

Starting in 1951, under President Truman and accelerated a decade later at the peak of the Cold War, the federal government promoted nuclear shelters as part of a public emergency response. Authorities believed that there was a way to survive the worst of nuclear fallout, resulting from an attack of nuclear bombs.

As a populous city and a financial and economic center, placed in the midst of the “vulnerable heart” of the United States, the New York metropolitan area was seen as a prime target for an enemy attack.

Federal scientists in the 1960s estimated that community shelters placed in existing buildings could protect half of the population in big cities. Until the early 1970s, some estimates indicate that more than 200,000 buildings in New York City were designated shelters.

Even though shelters were the primary objective of civil defense, the planners at that time “understood that the shelters were of minimal help,” said Dr. Laura McEnaney, professor of American history at Whittier College.

McEnaney points out that authorities at that time also had other reasons for constructing and promoting shelters to the population rather than physical protection only.

The New York State Defense Emergency Act defines a nuclear fallout shelter as a “building, structure, or other real property, or an area or portion thereof, so constructed, altered, or improved as to provide protection against harmful radiation resulting from radioactive fallout.”

Key criteria for an effective fallout shelter were the location, the thickness of its walls, and that it could house a large number of people. Hence, large sturdy buildings, often with basements, like government buildings, libraries, and schools, were chosen.

Fallout shelters were for radiation protection only and not meant to shield against a blast. It was stocked with food supplies so that inhabitants could survive for two weeks inside.